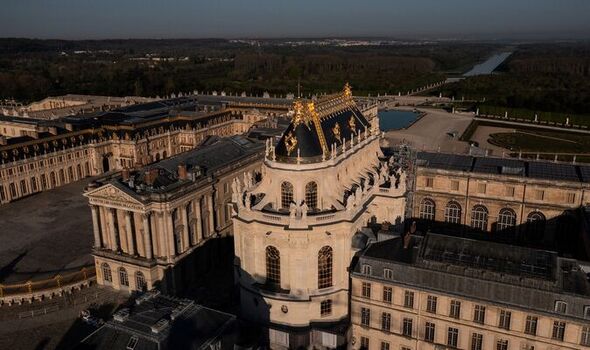 While researching my historical thriller, The Clockwork Girl, I became fascinated by 17th and 18th century Versailles: its strange rituals, its opulence and outrageousness, and its contrast with the abject poverty in which most of France lived.

IT was built by Louis XIV, known as the Sun King, as a gigantic status symbol. Everyone who saw it was meant to bow down in awe to the God-given power of the monarchy. With more than 700 rooms, a maze of galleries, a hall of 357 Venetian mirrors, elaborate gardens, 600 tinkling fountains, two enormous ice houses and a menagerie, it was the most extravagant court Europe had ever seen.

Estimates vary, but the price tag in modern money would have run to many billions of pounds.The eight-foot high throne was solid silver, as was the furniture in the Hall of Mirrors. The gardens even had an early roller coaster – the roulette – on which Louis, portrayed on the big screen by, among others, Leonardo DiCaprio, would give rides to his guests.

IT WASN’T just the palace itself that was eye-opening, but what went on inside it, as those who’ve watched BBC2’s series Versailles in which George Blagden plays Louis will know. His long reign featured a very long line of women.

At the age of 15, Louis’ sexual initiation was entrusted to the 39-year-old Baronne de Beauvais, aka “One-eyed Kate”, who “ravished him” on the way back from the baths. There followed a succession of lovers, including Athénaïs, Madame de Montespan, who became implicated in The Affair of The Poisons. She was accused of procuring love potions and of partaking in bloody black magic ceremonies in an attempt to retain Louis’s affections.

GENERALLY the ceremonies at court were more about pleasure than about the dark arts. Louis XIV threw some of the most lavish parties in history. Sometimes lasting for days, they included theatre, ballet, fireworks, dancing, costumes, equestrian and nautical shows, and banquets featuring dozens of courses. In 1663, he hosted a week-long festival for his reigning mistress, Louise de LaVallière, featuring fancy dress parades, plays, spectacles, and games in the castle moats.

In 1668, he spent a full third of the royal budget on a party to celebrate his victory over Spain, with 1,500 guests enjoying lavish tea in the Star Grove, a new play by Molière in a trompe-l’oeil théâtre, a feast in a hall crafted of trelliswork, a ball in a specially-created hall, and an enormous fireworks display that lit up the entire palace.

A MENU TO DIE FOR

THE FOOD provided at such parties was astonishing. Even on normal days, meals atVersailles required hundreds of servants. Each course consisted of several different dishes which were marched in ritualistic pomp from the kitchens and placed on the King’s table in an ornate pattern.The First Service included hors d’oeuvre such as pheasant decorated with feathers.

Then came roasts and pies made of partridge, pigeons, boar, venison, hare, oysters and turtles. By the time Louis XIV finished eating, he had tasted up to 30 different dishes ch gu an dishes, washed down with copious champagne. On special occasions, however, guests enjoyed elaborate edible sculptures and table centrepieces spun from sugar.

The vast majority of people lived in poverty and society was legally stratified by birth, keeping the poor forever poor

To celebrate the birth of Louis XIV’s grandson, a clockwork cake was constructed that “both depicted and animated” the birth of the child through a female figure made of marzipan.

WELL before the French Revolution, some were warning that the excesses ofVersailles were causing public discontent.After all, this was a country where the vast majority of people lived in poverty and society was legally stratified by birth, keeping the poor forever poor. By the time the Sun King’s great-grandson Louis XV took the throne in 1715, public opinion was turning, and Versailles was increasingly regarded as immoral.

Tales abounded of “open debauch” with the Duchesse of Retz said to have a lover on every floor of the palace. Louis – known as the “Well-Beloved” – had a series of affairs, including with all four aristocratic de Mailly sisters between 1732 and 1745. It was rumoured that two of the siblings, Marie-Anne and Diane, liked to “entertain” the king together.

It was for Marie-Anne that he installed the “Flying Chair”, one of the first lifts in history, to save her the climb to the mistresses’ apartments.

Despite the darkening public mood, Louis continued to lay on lavish events, reinstating a schedule of weekly entertainments. Gambling was a favourite pastime, with huge sums squandered at the gaming tables.

There were sumptuous banquets, opera, theatre, ballet, concerts and themed balls in the Salon of Hercules. Masked balls were particularly popular (and notorious) and it was at such a ball that Louis (dressed, for some reason, as a yew tree) met the woman who would become the most famous mistress of them all: the beautiful and highly intelligent Madame de Pompadour.

Pompadour, one of the main characters in my new book, spent rife fortunes collecting art, books and prized jewels. One of her hobbies was gem-carving.

THE STINK OF WEALTH

THOUGH the palace and its occupants might have looked gorgeous, they smelt revolting.

Pet dogs defecated wherever they liked, as did the goats, lambs and rabbits that court ladies sometimes led about on ribbons.A lack of facilities meant that visitors often popped behind statues or tapestries.n

Flushing toilets (“lieux a l’anglaise”) were, however, installed for the royals themselves and were kept so clean that Louis XVI once sat down without noticing the angora cat curled in the toilet bowl. As Tony Spawforth notes in his book, Versailles: a Biography of a Palace: “When events galvanised the cat into attacking, a dazed Louis XVI fled, stockings in hand, ringing all the bell pulls.”

Get the latest three-day weather forecast where you live. Find out by adding your postcode or visit InYourArea

There was also the stench of the courtiers themselves, for at that time it was believed that bathing too frequently was unhealthy. Louis XIV did install exquisite marble baths at Versailles, but these were more for “sensual” than cleaning purposes, with a full-size bed next door. He generally bathed only twice a year.

This was considerably more, however, than the British King James I, who was said never to bathe, causing his rooms to be filled with lice. Servants lived in a parallel universe of staff corridors, backstairs and antechambers, to be summoned by the bell pull or their master’s call. While the royals lived in luxury, the domestics were consigned to tiny rooms or even cupboards.

There were also grubbier goings on.After Madame de Pompadour stepped back from royal sexual duties (she was exhausted), Louis XV bought a house in the Parc au Cerfs, said to be for “young girls for the pleasures of his master”. The French public took a dim view of immorality, and matters worsened when Louis XV took prostitute, Madame du Barry as his next mistress.

Then, as now, a woman had to be found to blame, and hatred focused on Louis XVI’s wife, the Austrian-born Queen Marie Antoinette, known as Madame Deficit. With her jewel-encrusted wardrobe and love of diamonds, she became a symbol of all that was wrong at Versailles.

One publication depicted her rooms atVersailles as, “a bordello in which stark-naked courtiers and prelates took turns servicing the lustful queen”.

END OF THE PARTY

EARLY in the morning of October 6, 1789, hundreds of angry and hungry Parisians broke into the palace of Versailles, running through the gilded halls, beating and beheading guards.

Louis XVI and his queen were executed in 1793.

The causes of the French Revolution were complex, but in Versailles the people saw social inequality and unfairness. The party, they decided, was finally over.