Admittedly I am running early but when I get to Jo Ferguson’s house she is gardening. In her pyjamas. Sometimes, she says, she is barefoot as well. On getting up in the morning, she looks out her kitchen window, wanders into her mixed beds and invariably finds herself hard at it.

You can tell too. Her garden, on a hill in Flinders on the Mornington Peninsula, is the sort of place that lifts your mood. It is whimsical and floaty but also complex and curated. It is a really nice spot to be. You can see this for yourself when it is open in January with Open Gardens Victoria. 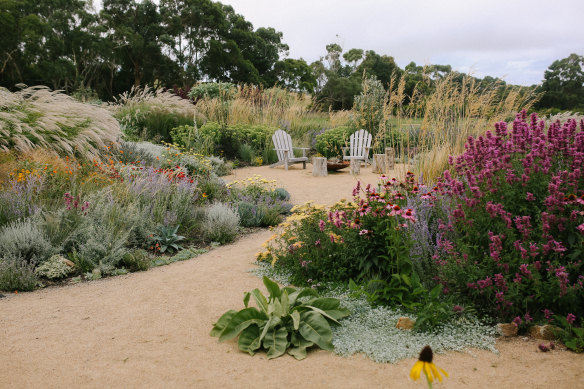 Jo Ferguson’s garden is like a magical grassland.Credit:Jessica Tremp

Ferguson’s garden feels like a big, magical grassland. Echinaceas, kangaroo paws, alliums, dahlias, paper daisies and hundreds of other different flowers jostle for space with a huge array of local and exotic grasses.

Plants wave in the wind and weave through and around each other in a way that seems relaxed and spontaneous. Clipped shrubs and conifers, sculptural aloes and other statuesque plants lend a sense of contrast. 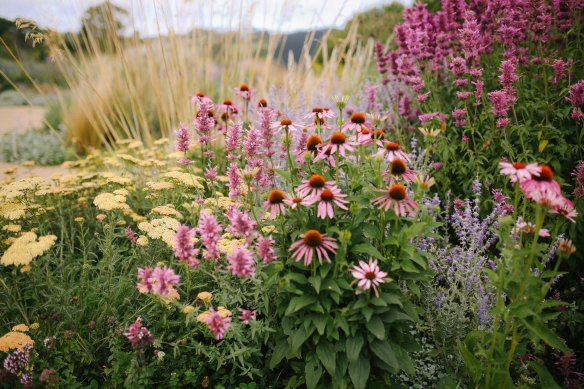 While Ferguson says some of the plant combinations happened “by accident”, you couldn’t say this garden came about by chance. It was borne of a long career in horticulture. Two long careers in horticulture, in fact, because in many ways it is a double act. The garden has been fashioned – mostly in the last three years – by both Ferguson and her partner Simon Hazel.

Ferguson, a garden designer who has also worked in graphic design, landscape regeneration, environmental management and the nursery industry, has taken charge of the design, the planting and the day-to-day care. 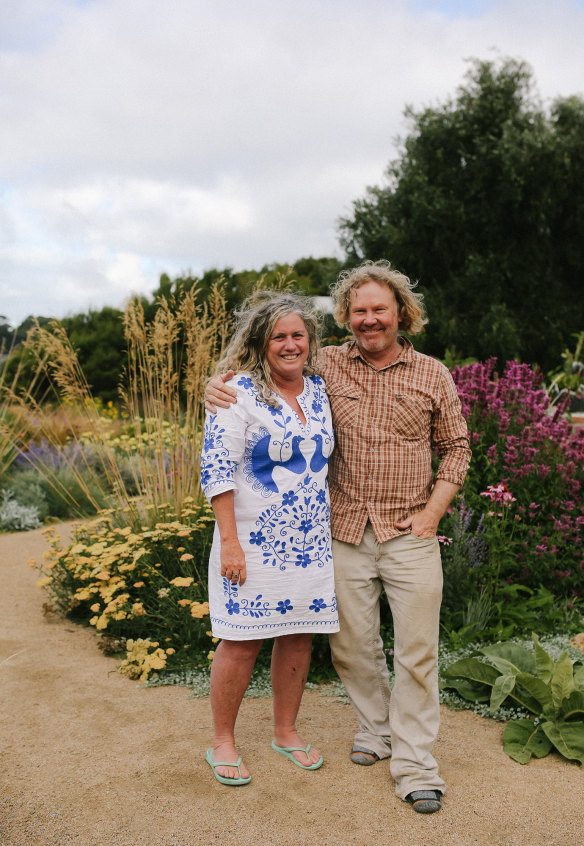 Jo Ferguson and Simon Hazel have fashioned most of the garden in the last three years.Credit:Jessica Tremp

Hazel, who works in commercial landscaping, has overseen the larger-scale aspects of the landscape. Before they undertook any planting he topped their heavy clay soil with a mix of sand, compost and coarse mulch. Not only did this help improve the drainage, it also created a sense of topography and a diversity of microclimates.

Hazel is not someone to do things by halves. When he makes compost he incorporates 100 cubic metres of horse manure and vast quantities of grape marc – the solid remains of grapes after pressing – turns it with his digger and lets it decay for a year. When he grows seedlings for Ferguson to plant, he imports seeds direct from Germany. He also keeps bees.

When planning the garden, Ferguson says she spent a lot of time thinking about what both she and Hazel “really loved”. “I said to Simon, ‘where do you feel the most joy?’ He said, ‘when I see bees on flowers’. When I asked myself, I said being in grasslands. When I was little I would sit in the grasslands on the foreshore at Merricks Beach.”

She married the two answers into a space that is grassy and floral and that is a haven for birds and bees and “all sentient beings”. Their two sons have also had a hand in some of the planting choices.

“Gardens can bring people closer to who they actually are,” Ferguson says. “They are the place where you can be yourself. It’s about a felt sense to a garden, it’s not just visual.” She says some of her best gardening comes from getting into a sense of “flow”. “It’s almost like being guided, it’s freeing yourself up, a letting go.”

She encourages everyone making a garden to think about their happiest memories. “Where did you feel most whole? Where did you go when you were sad? What plant or plant communities give you a sense of joy? What are your favourite colours? Try to bring elements of that into your garden, it is important.”

Ferguson says she is inspired by pinks, blues and lemon yellow as well as a smattering of purple (“not too much”). She likes the colour in a garden to be “suffused with foliage”. “I am looking for that fuzzy blur rather than that plant here and that plant there. The grasses do that blurring at the edges.”

Right now swathes of flowering Stipa gigantea are forming gauzy golden veils all through her patch. Through this Golden Oats Grass, and lots of other plants as well, there are long views in every direction, including over Bass Strait from the front of the house.

At the back, a curving wall of salvaged terracotta agricultural drains provides a sculptural focal point, protection from the wind and glimpses of both the garden and wider landscape beyond.

It’s this sense of spaciousness that Ferguson encourages. She sees it as a way of connecting to nature. “Indigenous cultures valued nature as the most important thing. It’s not an infinite resource. We need to value it like they do.”

Gardens like this are a way to do it.

‘The Family Garden’, 2351 Flinders – Mornington Road, Flinders is open on Saturday 21 January and Sunday 22 January, 10am to 4.30pm, $10/$6 students. Go to opengardensvictoria.org.au for more information.