Unita Blackwell, who was born in a sharecropper’s shack in Mississippi in the depths of the Depression, grew up having no idea what it meant to vote. She did not even know the word.

Then, in 1964, civil rights activists arrived in her corner of the South. They told her about voting, she said years later — that it could put food on the table and help her find decent housing, “that the vote was the key, that you would have the say-so and that you could get those things into your community.”

But she also learned that just trying to register to vote in Mississippi could get a black person killed.

These realizations marked her political awakening, prompting her to lead voter registration drives and devote herself to the civil rights movement.

“Overnight, I went from field hand to full-time freedom fighter,” she wrote in her memoir, “Barefootin’: Life Lessons on the Road to Freedom” (2006, with JoAnne Prichard Morris).

Ms. Blackwell, who died on Monday at 86, became a pillar of the movement. She marched, filed lawsuits and was jailed dozens of times as she pressed for voting rights. She helped integrate Mississippi’s schools. She led efforts to get housing built for the poor and elderly.

And in 1976, this woman — who as child had been slung over her mother’s shoulder in a sack before she learned to pick cotton herself, who had for years never dared look a white person in the eye, whose parents could not read or write, whose grandfather had been shot in cold blood by his white plantation boss — became the first black woman to be elected a mayor in Mississippi.

She would also win a MacArthur “genius” grant in 1992, travel to China with the actress Shirley MacLaine and advise six presidents, becoming especially close to the Southerners Jimmy Carter and Bill Clinton. 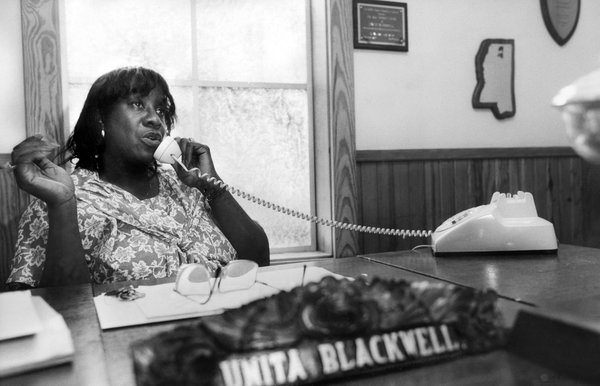 “The movement gave me a life,” she wrote in her memoir.

Ms. Blackwell estimated that over the ensuing years she was jailed at least 70 times on contrived charges, and often humiliated, assaulted and beaten.

The voter registration drive led her to join the Mississippi Freedom Democratic Party, an integrated group — co-founded by the crusading black activist Fannie Lou Hamer — that challenged the seating of the state’s all-white delegation at the 1964 Democratic National Convention in Atlantic City.

The Freedom Democratic Party failed to win those convention seats, but it focused national attention on the conditions black people endured in the South and helped pave the way for the landmark Voting Rights Act of 1965.

That law led to a dramatic increase in the number of black people who could vote, and in the number elected to public office — including Ms. Blackwell. In 1976, she was elected mayor of the Mississippi Delta town of Mayersville, a post she held for more than 20 years.

Before that, though, her life had been a series of battles — private ones (with anger issues and alcohol, leading her to stop drinking in 1971) as well as public ones, like a notable episode in 1965: After a march on the State Capitol in Jackson, she was held with 1,100 other demonstrators in a livestock pen for 11 days. They were forced to sleep on concrete floors as the women among them were sprayed with disinfectant and subjected to strip searches in which sticks were poked up inside them.

As she wrote in her memoir: “I don’t think most people today — younger people especially — have any idea of the price that ordinary black Mississippians have paid.”

She was born U. Z. Brown on March 18, 1933, on a plantation in Lula, Miss., a tiny, impoverished Delta town in the northwest corner of the state. Her father, Willie Brown, was a sharecropper. Her mother, Virdia Mae Brown, picked cotton. When U. Z. reached the sixth grade, her teacher said she needed a name, not just initials; she and the teacher settled on Unita (pronounced you-NEE-tah) Zelma.

After her parents separated in 1938, her mother took Unita and her older sister, Augusta, to live with relatives in West Helena, Ark., where they could go to school for a full academic year; where they had lived in Mississippi, black children could attend school for only two months before they were sent back to the cotton fields.

Unita left school at 12, after the eighth grade, and, except for a spell peeling tomatoes in Florida, picked cotton until she was 31.

She was married three times. Her first husband was Jeremiah Blackwell, with whom she had a son, Jeremiah Jr., her only child. She divorced Mr. Blackwell but kept his name through her other marriages.

Her son said in an email that his mother had died of complications of dementia at a hospital in Ocean Springs, Miss. In addition to him, she is survived by two grandchildren, two step-grandchildren and eight step-great-grandchildren.

Ms. Blackwell’s cotton labors ended in the Freedom Summer of 1964, when the Student Nonviolent Coordinating Committee was recruiting local residents to help register black people to vote. Ms. Blackwell signed up on the spot.

“I didn’t know anything, absolutely nothing, till 1964,” she said in 1977 in a University of Southern Mississippi oral history.

In Issaquena County — long one of the poorest and least populated counties in the United States — she was one of eight African-Americans who tried to register to vote in 1964. As they stood outside the courthouse, white men with guns surrounded them. Finally, they were allowed to go inside, one at a time, to register. But they had to take a literacy test, which was rigged against them, and all of them failed.

This only fueled Ms. Blackwell’s determination. She joined several lawsuits that challenged voter discrimination, although in the Jim Crow South most such efforts went nowhere until the Voting Rights Act of 1965.

In 1965, Ms. Blackwell sued the Issaquena County Board of Education, which had suspended 300 students, including her son, for wearing freedom pins. She also sued to desegregate the school district. The courts — first state and then federal — held that the students could not wear the pins, but that the schools had to be desegregated.

In 1967, Ms. Blackwell was among those who met Senator Robert F. Kennedy when he made his historic visit to the Delta to see the poverty there first hand. “We have children who have never had a glass of milk,” she told him.

Her election as mayor of Mayersville, which at the time had fewer than 400 residents, gave her the chance to bring about the change she sought. She paved the streets, installed streetlights and sewers, and fought for better housing.

She went to China in 1973 with Ms. MacLaine, whom she had known from the civil rights movement. Ms. Blackwell proved popular with the Chinese and ended up going back at least 15 times, including to Beijing for a conference in conjunction with the World Conference on Women in 1995.

For the rest of her life Ms. Blackwell would exhort people to organize and demand their rights.

“A small group of abolitionists writing and speaking eventually led to the end of slavery,” she wrote in her memoir. “A few stirred-up women brought about women’s voting.” The people, she said, are the ones who bring about change. “Us. We are the movers. The president and Congress follow us.”