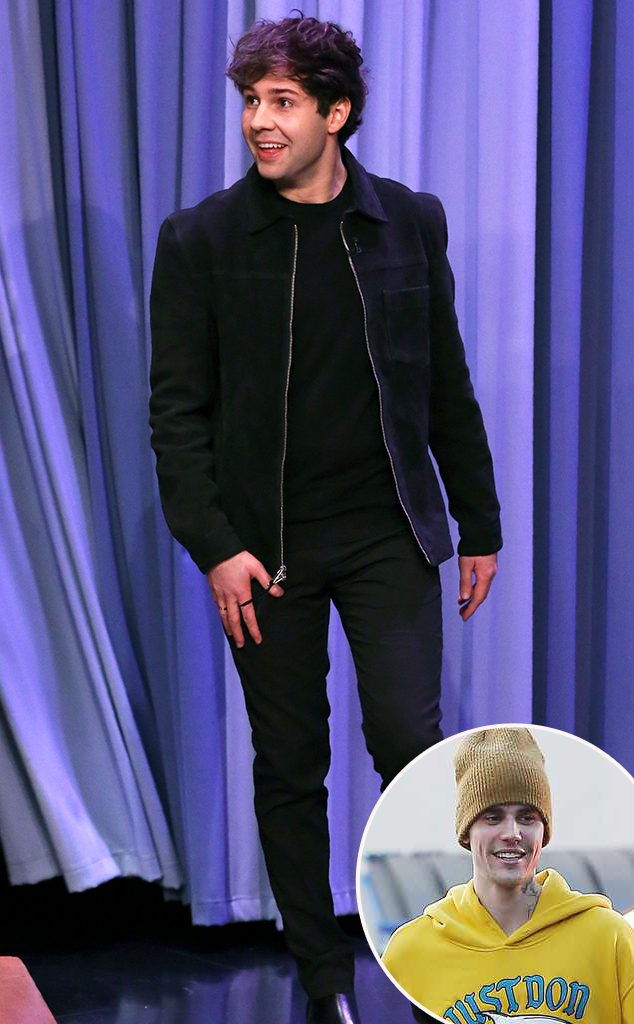 On Tuesday, the fan-favorite YouTuber made his late night debut on The Tonight Show Starring Jimmy Fallon and had the best story about the first time he met the “Yummy” singer.

“I saw him at the club and one of his friends was like, ‘You’re gonna meet Justin,'” he told host Jimmy Fallon. “And I just remember, just like…everyone knows Justin Bieber, right? Like, everyone grew up—or at least, I grew up listening to his music. I know all about him I was so nervous.”

Despite his nerves going into it, the interaction ended up making for one amazing story. “And he’s walking over to me and I say, ‘Hi, I’m David.’ And he’s like, ‘Hi, I’m Justin,'” the social media influencer continued. “And then he walks by me…and he goes, ‘Tickle, Tickle…’ And I said, ‘Okay, cool…’ It felt so good after he tickled me. It was the best icebreaker when he tickled me.”

Weeks later, the duo teamed up for a video on David’s YouTube channel, where Justin helped the viral star surprise fans. With the “Sorry” singer hiding in the backseat, David pretended to host a pop culture quiz with his unsuspecting fans and waited for the perfect time for Justin to make his entrance.

“Justin Bieber surprised me,” he joked after explaining the gist of the video. “And then he would pop out when I asked what they thought about Justin Bieber.”

When asked where the inspiration for his viral videos and successful YouTube channel came from, David explained that it stemmed from his love of getting a reaction out of his friends. Since creating his account in 2015 and reaching over 15 million subscribers, the star constantly showers those closest to him with lavish gifts.

“Over the last year, we got to surprise a little over 15 of my friends with brand new cars,” David said. “So, that was…I used to watch military surprise videos, like, all the time. Like, I love people’s, like, reactions to things—whether it’s, like, a good reaction or a bad reaction. So, now I have this opportunity where I can, literally, get a reaction out of a lot of people. So, I’m kind of just addicted to the whole thing.”

He added, “It’s super selfish. People are always like, ‘That’s so sweet that you do it.’ But, like, anybody in my shoes would just get your friends whatever you possibly can.”

Watch David share his epic Justin Bieber story and break down the success of his YouTube channel in the video above!