UK firms have been on a hiring spree since Covid restrictions further eased in June as unemployment nudges down, new data shows.

The number of employees on company payrolls surged by 356,000 in June from May, the biggest increase since the start of the coronavirus pandemic. 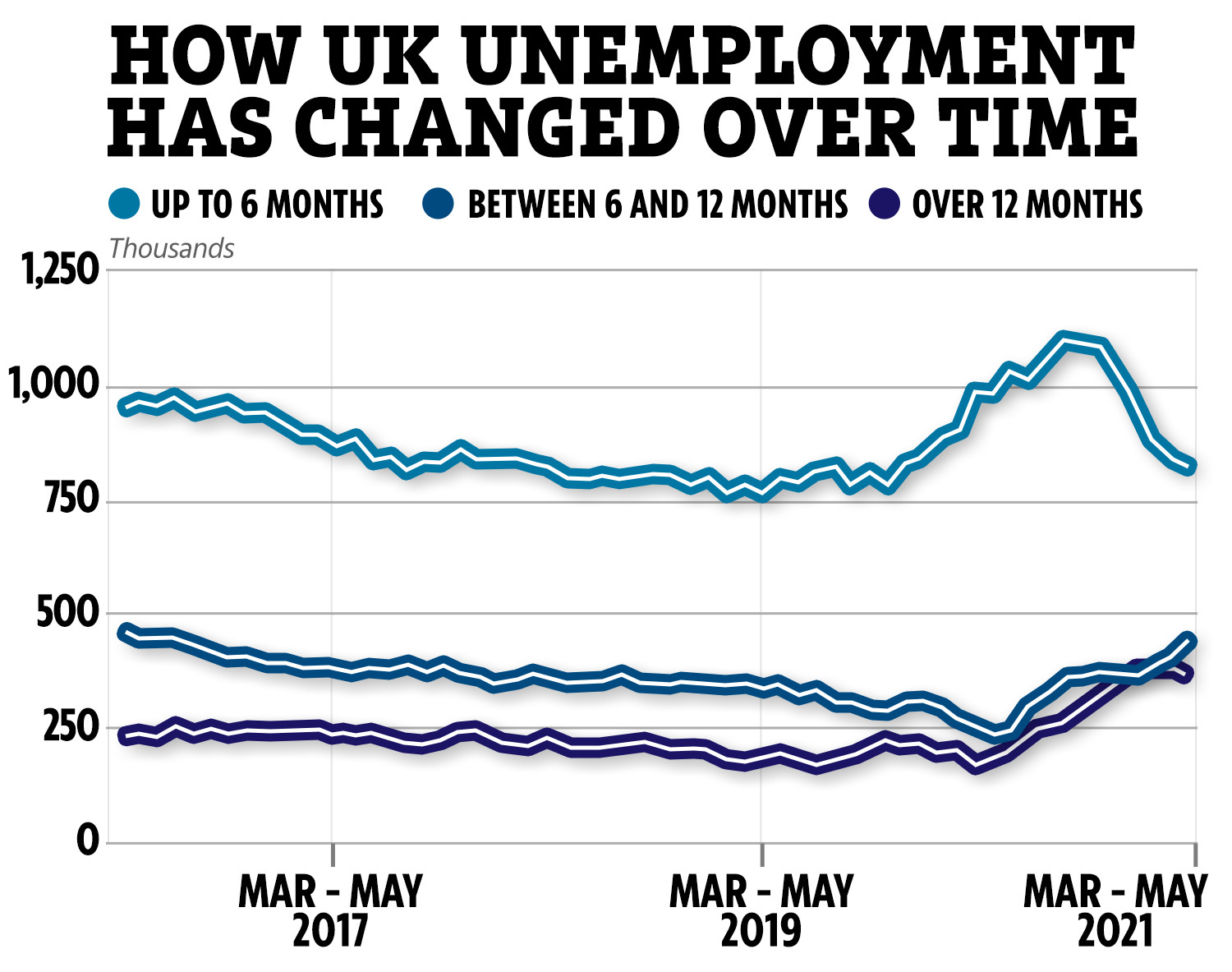 According to the latest Office for National Statistics figures, the rise in hires was driven by hospitality and retail businesses, who have been trying to claw back lost sales due to the Covid crisis.

There was also a 72,000 rise in jobs in administration and support services.

However, the number of Brits on payrolls is still 200,000 down from pre-Covid levels, the ONS said.

Job vacancies were up 38.8% compared to the previous three months, with the largest number of roles up for grabs in arts, entertainment and recreation businesses.

This is the highest level of jobs open to Brits seen since 2018.

The UK's unemployment rate also nudged down to 4.8% as Britain gets back to business.

But this is still 1% higher than before Covid began.

Brits also saw a boost to their pay checks too in the three months to the end of May.

Average weekly earnings May rose by 7.3% compared with a year earlier.

The ONS' data also indicated that more Brits were back to work, with the number of hours racked up by employees in the UK increasing by 23.3 million hours from March to May compared to the previous three months.

Darren Morgan, director of economic statistics at the Office for National Statistics, said: "The labour market is continuing to recover, with the number of employees on payroll up again strongly in June.

"However it is still over 200,000 down on pre-pandemic levels, while a large number of workers remain on furlough."

Commenting on the data, Chancellor Rishi Sunak said: "As we approach the final stages of reopening the economy, I look forward to seeing more people back at work and the economy continuing to rebound.

"We are bouncing back – the number of employees on payrolls is at its highest level since last April and the number of people on furlough halved in the three months to May."

While minister for employment Mims Davies said: "“There is still work to do as today’s figures show, but importantly we’re on the right track and pushing for recovery – with a sustained rise in the number of people on payrolls, including 135,000 more young people in work this month, and another rise in vacancies on offer as we continue on our roadmap."

But experts have warned that unemployment could rise again later on this year, after the furlough scheme ends in September.

Companies have already started to chip in to pay for the government's flagship wage support scheme, and will have to stump up for 20% of furloughed workers' wages when the help tapers off.

But there are fears the scheme changes could prompt redundancies because employers can't afford to take on the increase of costs.

Hargreaves Lansdown personal finance analyst Sarah Coles said: "The Bank of England was expecting half a million people to still be on furlough when it was withdrawn in September, so unemployment would peak at 5.5% in the autumn.

"This doesn’t seem beyond the realms of possibility."

However, it comes following on from ONS' reports yesterday that the UK's inflation rate was higher than expected in June.

The Consumer Price Index (CPI), which measures inflation, soared to 2.5% in June from 2.1% in May.

This is higher than what economists had expected it to be at 2.2%.

A single-mum explains how she saved £8,500 in six months by ditching Tesco, cutting bills and buying Poundland make-up.

Here's 20 money saving hacks that could make you hundreds of pounds richer.

For more guides, we've rounded up eight Martin Lewis money-saving tips that could save you £9,243.