TWITTER has been accused of profiting from promoted posts pushing a Bitcoin scam featuring Britain’s youngest millionaire, an investigation by The Sun can reveal.

The paid-for-posts on the social network feature fake quotes and images of Akshay Ruparelia, 21, who founded online estate agent Doorsteps in 2016 when he was just 17-years-old. 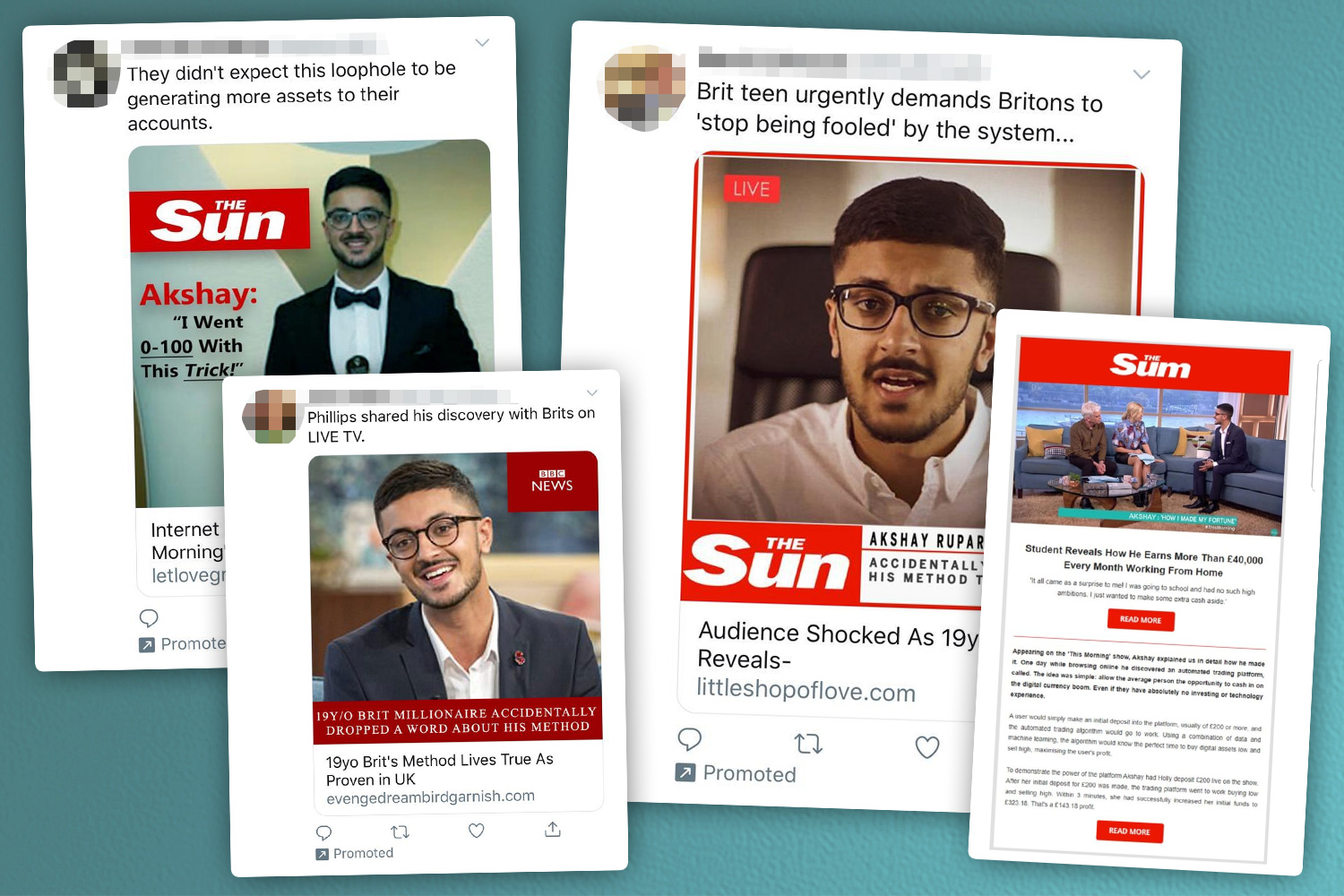 Mr Ruparelia has raised more than £1million through crowdfunding campaigns that value his business at £18million and made the 2018 Sunday Times Rich List with a net worth of £16million.

The tweets link to a fake article which promotes Bitcoin Up – a company that claims users can make £1,200 a day though trading the cryptocurrency.

But this is the latest crypto scam targeting victims who may be lured by the promise of high returns.

The Financial Conduct Authority (FCA) estimated that more than £27million was lost to crypto scams in 2018/2019, with an average of £15,000 stolen from scammed investors.

How to protect yourself from an investment scam

TO avoid falling victim to investment scams, you need to remain vigilant when making investment decisions.

Signs that should set the alarm bells ringing include:

Mr Ruparelia said he has had at least two people contact him per day over the past month to check if the sponsored tweets are legitimate.

He told The Sun: “Initially it wasn’t that prominent so I didn’t think that much about it and assumed it would die out.

“It has become almost incessant over the past three or four weeks.

“Thankfully, no-one I have spoken to has invested but some have come to me to advise on the next steps.

“My worry is for those who don’t contact me.

“I have never invested in bitcoin. These are scams and are in no way affiliated with me.”

The tweets led to a page where Blix Group, an Estonian-based broker which appears on the FCA scam warning list, is listed.

Users decide what they pay for promoted posts either based on clicks or an overall budget.

There is no minimum cost but Twitter does offer a quick promote option that will suggest an estimated number of impressions or engagements based on spending between £50 to £5,000.

The estimates will depend on the subject and the location but the more an advertiser spends, the more they can potentially reach.

Twitter has an automated approvals process for ads on its platform that restricts content that manipulates media and promotes cryptocurrencies so it is unclear how these posts went live.

A statement from Twitter said: “We do not accept advertisements – of any kind – that violate the Twitter Ads policies.

“We have a zero-tolerance approach – if and when an advertisement violates these rules, we take enforcement action.”

The posts have since been removed after the Sun alerted Twitter.

A spokesperson didn’t comment on whether it was appropriate for the social network to make money from spam posts.

The Sun contacted Blix Group for a comment but it has not responded.

It comes after MoneySavingExpert founder Martin Lewis threatened legal action against Facebook in 2018 after his image was used in scam ads on the social network.

Mr Ruparelia has sought legal advice from privacy lawyer Rory Lynch, who acted for Mr Lewis in his claim.

What to do if you think you’ve been scammed

You should also contact your bank or credit card provider immediatley to see if they can stop or trace the cash.

Also monitor your credit report in the months following the fraud to ensure crooks don't make further attempts to steal your cash.

He said: “The law does protect social media platforms as they are intermediaries.

“They have a legal defence if they remove the posts when notified.

“It is like whack-a-mole as they will just keep popping up and it got to a point with Martin Lewis that he had a whole team dedicated to reporting issues.

“There is a moral question as to how they can take money for sponsored posts from scammers but Twitter would argue that it doesn’t know who they are.

“Legal action is also a problem as who do you sue? You can’t find the scammers or they may be outside your jurisdiction.

“I understand the law protects social media companies, but there is a question over why they should make money from the scams.”

An FCA spokesperson said: “The FCA currently does not have the power to direct search engines to stop advertising online scams and frauds nor does any other agency.

“The FCA is a member of the National Economic Crime Centre and works closely with other agencies to combat fraud, this is why we advise anyone who wishes to report frauds and scams to contact Action Fraud.”