There’s an age-old question we hear whenever a wealthy donor is found to be giving eyewatering sums of cash to a political party. What’s in it for them?

And it’s the question that Labour and Sir Keir Starmer cannot now avoid.

It has been revealed that Starmer, his deputy Angela Rayner and their party have collectively pocketed nearly £400,000 from a key backer of Just Stop Oil, the lunatic eco-activists who closed down the centre of London last year, as well as the M25 and other major routes.

Dale Vince, the 61-year-old vegan owner of Forest Green Rovers Football Club, has given the party £360,000 since the last election via his Ecotricity power company. 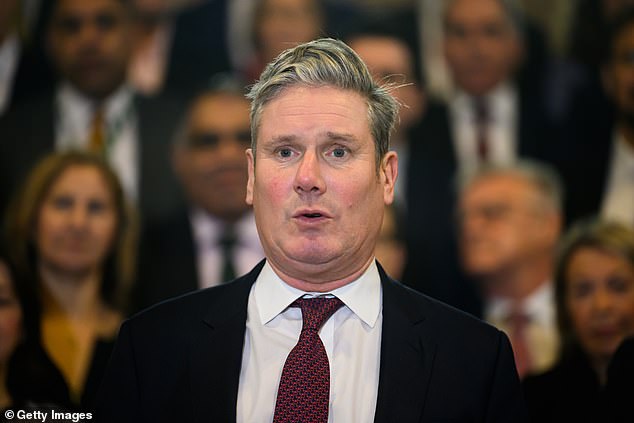 TOM HARRIS: Starmer, his deputy Angela Rayner and their party have collectively pocketed nearly £400,000 from a key backer of Just Stop Oil (pictured on January 11)

And he has also admitted giving Just Stop Oil ‘tens of thousands’ to get started, plus an additional lifeline as recently as November.

All this means that the cause supported by self-indulgent and criminal protesters and Labour’s election-fighting war chest have both been partly funded from the same source.

That is an explosive and shameful conclusion. And the corollary is clear: the money should never have been accepted and Starmer must return it now.

As a former transport minister who served under Tony Blair and Gordon Brown, I know how helpful major donations can be for party campaigning. But in taking Vince’s cash, Starmer is inexcusably turning a blind eye to the misery that Just Stop Oil put so much of the country through. 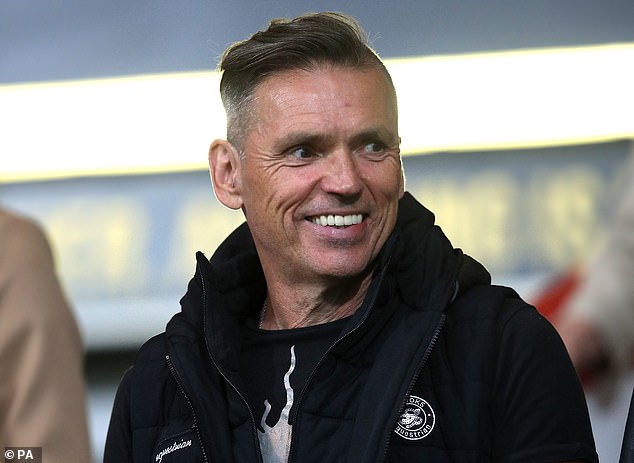 Dale Vince, the 61-year-old vegan owner of Forest Green Rovers Football Club, has given the party £360,000 since the last election via his Ecotricity power company (pictured in 2019)

Most of us haven’t forgotten the nightmare suffered by motorists and workers thanks to the antics of these selfish activists. Patients couldn’t get to hospital, grieving relatives missed the funerals of loved ones and hundreds of thousands were disrupted as they tried, fruitlessly, to get to work.

Either the Labour leader has forgotten all this or, desperate to swell his party coffers, he believes that the suffering inflicted on his own voters is nothing against a generous cheque or three.

Whatever, his willingness to pocket the cash is reprehensible. And I ask again: what’s in it for Vince?

He has said he donated to Labour to ‘help them win, to help them into government so they have the chance to deliver their agenda, which is my agenda: social justice and a green economy’.

But the money might also be a cynical attempt by Vince to protect himself from criticism by a future Labour government for having helped to bankroll Just Stop Oil’s disruption last year. Labour MPs may now bite their tongues rather than jeopardise future cheques from such a generous donor.

The party has form on this, after all, with the trade unions which provide most of its money. Despite all the misery and disruption inflicted on Britain as a consequence of recent strikes, Labour is united in an oath of silence when it comes to criticising the unions.

But I suggest there may be even more to it than that. Vince may believe that the fortune he has given to the party might revive the brazen support for militant green groups that Labour MPs displayed under their former leader, the disgraced Marxist Jeremy Corbyn.

Vince has never completely disowned Just Stop Oil, even if he claimed to ‘disagree’ with their habit of ‘smashing bank windows’. In April 2021, he also said the tactics of Just Stop Oil’s fellow travellers Extinction Rebellion (XR) were ‘a bit violent for my liking’.

But he will not have forgotten the behaviour of Labour’s shadow cabinet in April 2019, when XR set up camp outside the Commons, arrogantly designating Parliament Square a ‘car-free area’ while the Met police and frustrated motorists looked on.

At the time, Labour’s leadership — with Starmer playing a prominent role as shadow Brexit secretary — could have sided with the workers they claimed to represent, whose lives were being disrupted and income threatened by the protests.

Not a bit of it. Instead, they lined up to praise the protesters. Barry Gardiner, then a shadow energy minister, compared their antics with historic struggles against injustice.

Meanwhile, John Ashworth, who still sits in Labour’s cabinet as the Shadow Work and Pensions Secretary, spoke to the protesters and pledged to make climate change a central focus of Labour’s ‘health and wellbeing policy’. He also expressed support for one of XR’s three ‘demands’: a citizens’ assembly. 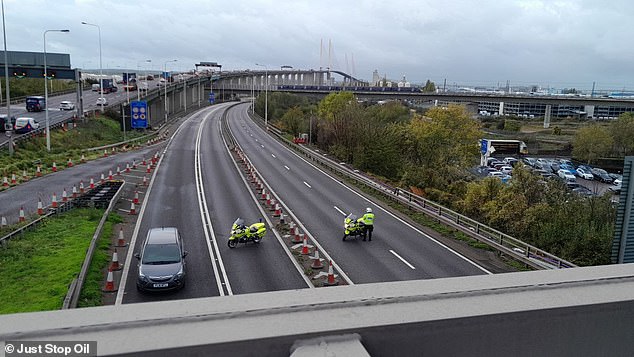 Just Stop Oil are the lunatic eco-activists who closed down the centre of London last year, as well as the M25 and other major routes. Pictured is Just Stop Oil stopping traffic on the M25 on November 8

Remember that XR’s demands included a Government-imposed deadline for Britain to reduce its carbon emissions to zero by 2025 — an unattainable and economically ruinous course of action that would devastate ordinary people’s jobs, incomes and living standards.

But instead of pointing this out to the protesters, senior Labour figures indulged them in the hope that they might benefit from the votes of fervent young activists.

The December 2019 general election put paid to any such notion, as Labour under Corbyn was swept away by Boris Johnson’s Conservatives.

The party has been under new management since, and Starmer, determined to do whatever he must to attract floating voters, has renounced his benighted predecessor’s fondness for such extremists. And as the former director of public prosecutions, he has gone further even than some ministers in advocating harsh penalties for those found guilty of deliberately sabotaging our road network.

Last year, he backed the Government’s plans to impose stiff sentences on climate protesters, saying: ‘I think it’s arrogant of those glueing themselves to the road to think they’re the only people that have got the answer to this. They haven’t.’

Quite so. So there can be no doubt that Starmer’s continuing reluctance to hand back Vince’s cash is a naked political calculation.

I remember when, 15 years ago, the Harry Potter author, J.K. Rowling, donated £1 million to Labour. Yet I am sure that if she were to announce a similar donation today, Starmer would not accept it.

For this globally best-selling author and philanthropist is now persona non grata among Labour activists and MPs, who object to her principled defence of women-only spaces and her gender-critical views.

Labour can take that stance if it chooses to. But the party is now being rankly hypocritical in continuing to retain donations from a man whose support for Just Stop Oil, a group which engages in illegal protests, is supposedly opposed to Starmer’s.

If Labour insists on holding on to Dale Vince’s money, it will make a mockery of the years spent trying to detoxify its brand after it was comprehensively destroyed by five years of Corbynism.

It also has every chance of derailing Starmer’s carefully laid plans to win power at the next general election as voters see he puts profits above principles.

Is Labour on the side of working people, as it likes to claim, or not?

Send the money back, Keir, and prove to the voters who suffered at the hands of these protesters that you’re really on their side. Or prepare to face their wrath at the ballot box.

TOM HARRIS is a former Labour MP for Glasgow South and was parliamentary under secretary of state for transport from 2006 to 2008.