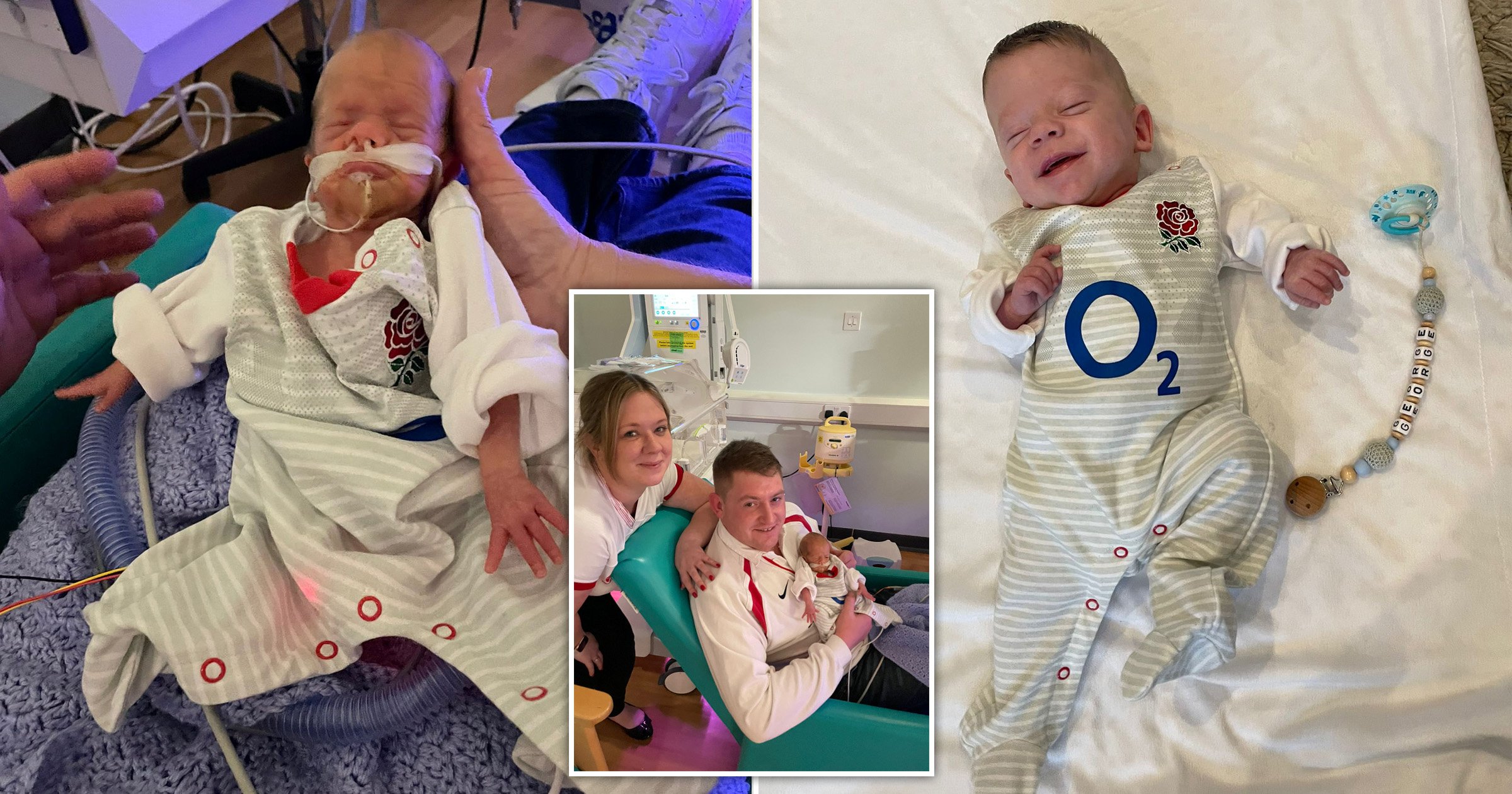 The tiny tot weighed a minuscule 1lbs 7oz and was so small it took doctors over half an hour to determine his gender.

Baby George’s parents had tried for more than three years for a child and the pregnancy had been fraught with worry after mum Chloe, 33, suffered a bleed at just 18 weeks and then caught Covid.

A 28-week scan revealed that George had stopped growing and doctors told mum Chloe that he would need delivered early.

Medics also found a potential blockage in George’s bowels that could have resulted in cerebral palsy, so made the decision to deliver him that week – much to the shock of Chloe and her husband, Nicholas, 36.

After spending two months on the neonatal ward in Great Western Hospital, Swindon, Wiltshire, and nearly 10 weeks in hospital, George has finally been allowed home with his parents.

George – who his mum describes as a ‘happy boy’ – now weighs a healthy 11lbs 5oz.

The tiny England rugby babygrow which once swamped him now fits perfectly – it was originally bought by Nicolas’ brother, Paul, 33, as the whole family are huge rugby fans.

Chloe, a marine engineer, from Swindon, Wiltshire, said: ‘We named him George as it was the strong name that represents the journey he went on the first two months of his little life and boy does he live up to it.

‘At points, we thought he might not make it but he’s so strong-willed and has proved any worries wrong every step of the way.

‘We’re so proud of how far he’s come after a few really scary months in hospital.

‘It’s amazing to see his playful personality developing and how much he fills the babygrow that once swamped him.’

Chloe and Nicholas, a social enterprise manager, underwent three years of NHS fertility treatment before becoming pregnant with miracle baby George – including laparoscopic ovarian drilling, a surgical technique of puncturing the membranes surrounding the ovary with a laser beam or a surgical needle.

With no success from the procedures, the couple were planning to embark on IVF treatment, first under the NHS for one free egg collection.

If unsuccessful, the pair may have required further IVF from Swindon Fertility Clinic, where treatment would’ve cost them anything between £10k – £14k per round.

However, much to their delight and relief, Chloe found out that she had became pregnant naturally in August 2021.

​She said: ‘I couldn’t believe it when I found out I was actually pregnant.

‘Because we were actively trying, we did monthly tests and so I was getting ready for work one morning and remembered that I needed to do a test for August.

‘I put it on the bathroom side, continued to get ready, and saw the two lines appear.

‘I had to check it twice.

‘Nicholas was still asleep so when I went crying into our room waving the test, it took him a minute to understand what was happening but, of course, he was thrilled.

‘To be honest, I still wasn’t convinced because of the disappointment we had faced from trying for so long.

‘When I went into work, I immediately told my boss, and she encouraged me to go to the local Boots and buy some more tests.

‘When all nine came back positive, then I believed it.’

Despite the exciting news – like many first-time parents – Chloe and Nicholas were very anxious about the pregnancy.

‘We had four private scans before the first trimester,’ Chloe explained.

‘After the 12-week scan came back OK, I settled down a bit and was able to tell the family.

‘It was amazing to be able to tell them the news we’d always hoped for.’

However, while pregnant at 18 weeks and on holiday in Poole, Dorset, Chloe suffered a bleed.

‘We were both incredibly panicked as I’d been classed as high risk at seven weeks when diagnosed with high blood pressure,’ she said.

‘We called 111 and they urgently sent us to Poole Maternity Unit and luckily the bleeding stopped when we made it to the hospital, where they advised me to rest as much as possible.’

She said: ‘I had a persistent cough and things felt too weird for them to be just pregnancy symptoms.

‘I clutched my bump the whole time as my husband drove to the hospital.

‘Doctors were pretty worried after examining me as they couldn’t get my blood pressure under control.

‘They told me my baby would have to be delivered before 32 weeks, which was terrifying.’

Although Chloe had initially being allowed home to recover, at the end of January 2022, her symptoms went from bad to worse.

At 28 weeks, she was admitted back into Great Western Hospital, Swindon, Wiltshire and on Monday January 31, 2022, George was born via C-section at 7.10pm.

‘When George was delivered and we heard that little cry, we felt relief,’ she said.

‘It took the team half an hour to identify his gender just because of how premature he was.

‘When we were able to see him, he was given to us in plastic wrap to keep him warm.

‘He was so tiny, he had to be placed on my chest and I gave him a kiss on his head before he was put in an incubator.’

Chloe and Nicholas spent the next two months in the hospital in order as they hoped George would become strong enough to go home.

In the first five days of George’s life, he was put on a CPAP – a machine that blows air through a mask to ensure that he could breathe continuously.

After that, he was put onto Optiflow – a humidified oxygen that assists breathing – for six weeks and then an oxygen tube when his lungs gained strength.

During their time there, Chloe decided that she wanted to do something to help other parents who were in the same situation.

The mum-of-one said: ‘When you’re in hospital there is only the canteen and cafes to rely on, we were spending £300 monthly on coffee alone which was crazy.

‘Having a baby prematurely means that many women are not on the maternity pay.

‘When faced with the extra expenses that come with staying in hospital, it makes things even more challenging.

‘We were both so drained as you forget to eat properly as you’re so focused on baby.

‘After the first month, George started to get better, and I thought of creating bundles for parents in the same situation and started to collect some donations.’

As George turned six months old, Chloe marked the milestone by donating the first 20 ‘Tiny But Mighty’ care packages to Great Western Hospital and has since then has donated eight emergency overnight bags and fully stocked the parents’ pantry – a kitchen area in the hospital where parents on the neonatal ward can get hot drinks.

‘The packages aren’t a magic wand, but they do offer parents that little support in a time when they need it most,” she said.

‘The progress we make with the packages reminds me of our own little bundle and how amazing George is.

‘He’s so smiley, just how a little one is supposed to be.

‘He loves books, turning the pages, listening to us read to him and looking at the pictures.​

‘Even though our journey started off rocky, I’m so grateful for the NHS treatment we received.

‘It won’t be long until George will be out of that baby grow and kicking a rugby ball around.

‘We met in our local rugby club in Swindon, now we have our own little star.’