Was there something suspicious going on in Scranton? Irregularities with the Dunder Mifflin conference room on The Office have long raised the eyebrows of select eagle-eyed fans. Despite the NBC comedy having been off the air since 2013, one Reddit user made the astute observation two years post-finale that "the conference room is constantly changed from filled with chairs to having a huge desk in the middle." With the beloved Emmy-winning mockumentary now both available to stream and in heavy rerun rotation on cable, BuzzFeed writer Stephen LaConte reopened the case in a Tuesday, Oct. 2 post. This is what he said.

"I’ve seen every episode roughly 1,000 times — but it wasn’t until the other day that I realized there was something very…unusual about Dunder Mifflin’s conference room," wrote LaConte. "And so, my friends, the question is: How the hell is this gigantic, heavy table getting moved in and out of the room so frequently?"

He made a valid point. Of course the frequently changing furniture and props were likely easily overlooked as fans caught their breaths between fits of laughter at the hilarious punchlines and fourth-wall-breaking stares into the camera. Upon close investigation, LaConte eliminated some possible theories, observing that the "solid wood" table "isn’t breaking apart or folding down the middle" and that there are "no wheels to be found." He also pointed out that it "would be a PROCESS" to move the table in and out of the small conference room door.

While the seemingly impossible logistics of changing the room setup may remain a mystery, the question seems like a good enough excuse to examine some evidence. Or, ya know, just revisit some classic conference room scenes from The Office.

In the Season 6 episode titled "Koi Pond," Steve Carrell’s Michael Scott facilitates a sensitivity training exercise for the staff. In this particular scene, some characters — including Jim (John Krasinski), Angela (Angela Kinsey), and Erin (Ellie Kemper) — sit around the table, while others are seated in chairs lining the perimeter of the room. Of course hilarity ensues when Carrell’s, well, insensitive, manager tackles subjects from his falling into a koi pond to Meredith (Kate Flannery) having slept with a terrorist. 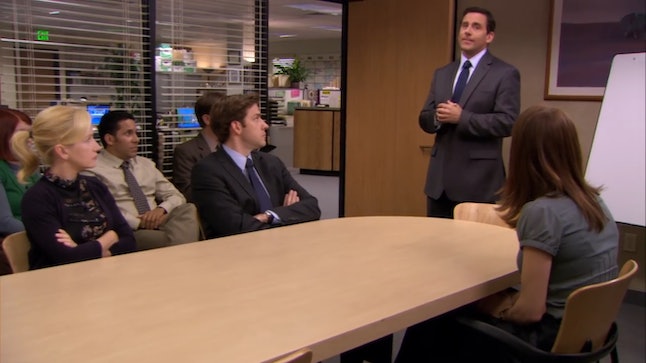 The conference room table was noticeably absent in Season 7’s "Michael’s Last Dundies," in which the Dunder Mifflin employees — seated in rows of chairs — pay tribute to Michael’s 9,986,000 minutes working for the company by singing singing a parody of Rent’s "Seasons of Love." 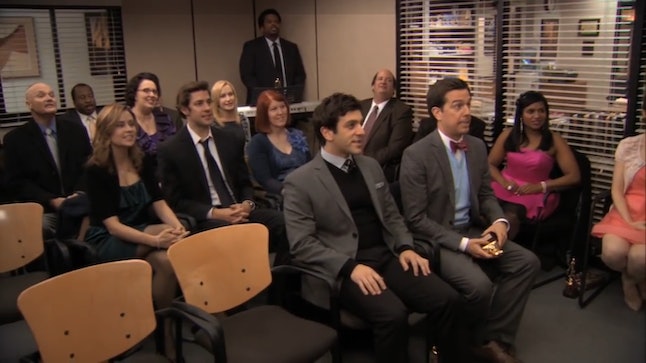 Throughout the series’ nine seasons, how could the Dunder Mifflin party planning committee have executed — or at least attempted to execute — the many office festivities? In the below compilation video, Angela, Pam (Jenna Fischer), Phyllis (Phyllis Smith), and Co, can be seen holding their meetings around the elusive conference room table.

When Carrell hilariously portrayed his fictional previously incarcerated, bandana-wearing "Prison Mike" character back in Season 3’s "The Convict," however, the conference room was arranged in the chairs-only style. Seated staff members really did try tho keep their composure as "tough" Michael told faux tales of his time behind bars — including the apparent existence of prison dementors a la Harry Potter.

Conference table present or not, there’s no debating that The Office kept fans in stitches regardless.