This Morning viewers have criticised a caller who rang in to complain about a crying baby keeping her awake at night.

Following a story about two warring neighbours, the ITV daytime show opened its phone lines to allow viewers to call in with their own problems and to seek advice from Vanessa Feltz.

A caller – who went by the name of Lucy – aired her grievances about the crying child before asking Vanessa for advice.

‘Mine is to do with a small child or baby in the flat below and it’s been causing me a bit of bother now for a good few months. 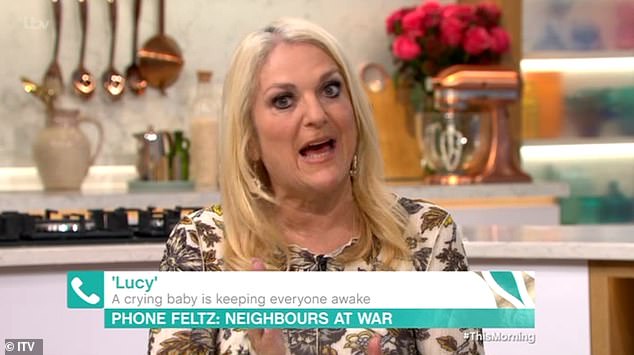 The broadcaster told ‘Lucy’ to ‘live and let live’ and invest in a pair of ear plugs in a bid to stop the noise having an impact on her sleep, when she phoned This Morning to complain that her neighbour’s crying baby was keeping her awake

She added that she knows the crying has been affecting other residents because the mother of the baby has complained about people banging on the floor.

According to Lucy, the mother has explained that there’s nothing she can do about the crying because her child is teething.

Unable to hide her surprise over the complaint, Vanessa explained to Lucy that the baby isn’t making noise on purpose.

‘What we cannot say to you is, this is a baby-free apartment block,’ Vanessa told the caller. 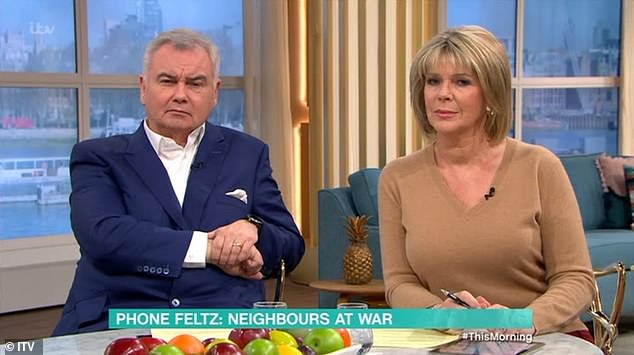 ‘People are allowed to have babies and the thing about babies is that they’re delightful and they often cry a lot especially when they’re teething.

‘They really do [cry] at the most inconvenient moments and as a parent, all you ever want to do is soothe your baby.

‘There’s no way that that lady wants her baby to cry, she certainly doesn’t want the baby to cry all night to spite you. It’s not that kind of thing, but sometimes with a teething baby, you can’t stop them from crying.

‘I bet she’s doing her absolute upmost to stop the crying and luckily for you, the baby will get older and stop crying as much.’

Continuing to advise Lucy to accept the noise, Vanessa added: ‘But in life you’ve got to live and let live and to make someone feel guilty because their child is crying – what are they supposed to do?

‘I’m sorry you’re being woken up but I’m sure there’s absolutely nothing they can do. If they could they would. I’m sure they don’t want to be woken up themselves.’

Vanessa ended the call by advising Lucy to invest in a good pair of ear plugs.

As the call played out on air, viewers expressed their annoyance over Lucy’s complaint.

‘What does Lucy want the neighbours to do? Everytime it cries, go around with a handwritten apology to everyone? Get a grip,’ one Twitter user asked.

Another commented: ‘Lucy seems to forget that its a baby – its meant to cry!’

A third user didn’t hold back when they posted on the social networking site: ‘Lucy’ who just called in on This Morning complaining about her neighbour’s baby crying.. I think I speak on behalf of all mums when I say f*** off!’

‘Babies cry! Get over it,’ one viewer stated on the social media site, while another said they had ‘no sympathy’.