Mario Vargas Llosa is one of the better writers alive, though not because of books such as this. This meta-novel about political atrocities in Guatemala by the Peruvian Nobel Prize winner sports a narrative line of such bewilderment and confusion that it would be scarcely more intelligible if the characters’ names were Churchill, Hitler and Stalin.

We begin intelligibly enough with the head of United Fruit, the roughneck Jewish chap who introduced the banana to the American breakfast table, seeking the savvy advice of a wizard of manipulation. He concocts the idea that they should persuade the Americans the democratically elected President of Guatemala, Jacobo Arbenz, is a communist and that the CIA should lead a coup that will ensure that United Fruit will flourish tax-free and everyone will be covered in bloodshed when Arbenz is replaced by the insipid Carlos Castillo Armas. 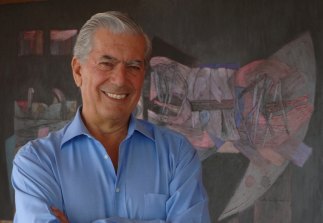 There is always something dumbfounding when a great writer such as Mario Vargas Llosa disappoints. Credit:Fiorella Battistini

Also important is the psycho-sadist Johnny Abbes Garcia and a thick-necked, thick-headed American ambassador, John Amiel Peurifoy. Then there’s the fact that President Armas becomes the lover of the female star of the book who is known as Miss Guatemala and who happens to be fictional as well as a character of vast allegorical suggestiveness. She is at least vivid and vivacious when she appears.

Vargas Llosa’s historico-political figures are stick men who are stupefyingly difficult to get a grasp of because they are either disembodied voices of gloating evil idiocy or glimpsed figures known by nicknames such as the Dominican or Hatchet Face.

Remote memories of The Feast of the Goat, to which Harsh Times is some kind of feeble successor, evoke qualities of narrative clarity, atmospheric music and dramatic verve that Harsh Times singularly lacks.

Only Miss Guatemala saunters and swishes into life and she’s no Natasha Rostova. Her movement and her speech at least resemble someone who might have an arresting role in a Vargas Llosa novel, but that’s about it. It’s true to some extent that there are recurrent flashes of the literary master in this book stripped bare of wonder but that works like a will o’ the wisp of fictional potential throughout this nightmarishly constructed doco-drama that treats history as its yo-yo.

You wouldn’t want to fall for the heresy that rubbish countries produce rubbish books on the basis of Harsh Times. In fact, the great renaissance of fiction from South America in all the great novels, most notably Gabriel Garcia Marquez but also the long line of his contemporaries, of whom Vargas Llosa is a very bright star indeed, belie the proposition that bad politics produces bad fiction (think of both tsarist and Soviet Russia.)

The truth is probably more that Vargas Llosa has always been a writer who allows himself tremendous latitude and licence, and he has been capable of taking a work that’s inclined to look trashy and turning it into a miracle of invention.

What has sometimes gone wrong with his fiction, however, is the allure of very interesting historical subject matter. That happened in The Dream of the Celt, in which he wrote about Roger Casement, the great Irish patriot, whom the British accused of paedophilia during his diplomat days in Africa. Casement’s justification of rebellion influenced Gandhi, yet the accusation has created an enigma and a challenge. None of this stops him from being a fascinating figure yet Vargos Llosa’s novel about him is flatter and deader than anyone would have imagined.

There is always something dumbfounding about the moment when a great writer disappoints. In the case of Harsh Times, the spectacle makes you wonder if you’re too thick for words. In fact, you’re in the presence of a compounded act of literary folly in which Vargas Llosa, with his vertiginous power to do as he will, is actually manipulated in a way that is mistaken.

For what it’s worth, such lapses are implicit in the magnitude of the man’s mastery of literary licence to wander where he will. If Harsh Times scarcely works at all and represents a weird and wonderful lapse of authorial intelligence on Vargas Llosa’s part, you could spend a long season reading him and learning about what a great enough breaker of rules can get away with.

Will the 85-year-old Vargas Llosa rise again? No reason why not. Does it matter? Not really, because his position as a contemporary classic and a vibrant literary master is assured.