Victoria’s crisis-focused child protection system must be radically overhauled to shift its attention to early intervention and prevent thousands of vulnerable children from entering residential care, according to the sector’s peak body.

The coronavirus pandemic exacerbated the challenges many families face and heaped further pressure on a sector already dealing with unprecedented demand as the number of notifications to and investigations by the Child Protection Service tripled over the past 10 years. 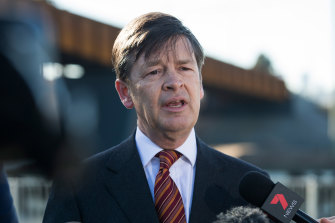 Minister for Child Protection Luke Donnellan is being urged to invest in early intervention programs in this year’s budget.Credit:Paul Jeffers

The Centre for Excellence in Child and Family Welfare, which represents 150 community service organisations, has urged the Andrews government in its May 20 budget to increase its focus on early intervention programs that keep children safe and ultimately divert them from child protection and the criminal justice system.

That call comes after a financial model by Berry Street child protection charity and Social Ventures Australia – created in November 2019 and updated in August last year – found investing $190 million every year for the next 10 years would save the government at least $2 billion and prevent 1460 children from entering out-of-home or residential care over the same period.

“We need to prevent as many families from getting to child protection, and if they do, tell them we will help them rather than only dealing with acute crises,” said Centre for Excellence in Child and Family Welfare chief executive Deb Tsorbaris.

“There’s a lot of focus recently on ambulance wait times, and everybody goes ‘that’s terrible’. But nobody ever says that about child welfare or protection.

In its November 2020 budget, the Victorian government invested $1 billion over four years into the sector – the largest funding to date – but the centre for excellence identified key gaps across five areas that should be addressed on May 20, including ensuring the sustainability of the sector post-COVID, supporting self-determination for Aboriginal and Torres Strait Islander communities, raising the age of criminal responsibility to 14 and preventing homelessness.

In its budget submission, the centre said now was the time “to invest in early intervention by building existing capacity in this space”, and it called for a further $200 million each year for the next 10 years for early intervention programs.

The majority of funding allocated to the child protection system is being spent on more child protection workers and residential care, and not on preventing children and young people from entering the care system, it said.

“While addressing the immediate pressures on the child protection workforce is important, this investment does not address the drivers of demand,” the submission said.

“We need to focus our investment and system response much earlier, when families first show signs of stress, and when a child is returned following statutory intervention.”

Opposition early childhood spokesman Matt Bach has called for an independent inquiry into the state’s child protection system following the deaths last year of 65 children who were known to authorities, and has backed a radical shift of the system to focus on helping families sooner.

“Victoria’s child protection system is in a state of crisis,” Dr Bach said. “A radical policy change is needed to keep kids out of care in the first place.

“The state budget represents an opportunity to move away from the government’s failed, crisis-driven approach and embrace prevention and early intervention.”

There were more than 120,000 reports to Child Protection Services about the wellbeing and safety of children last year, following 123,000 the year before, according to last year’s budget documents.

“We’re already transforming our child protection system to focus on targeted early intervention, and give families under pressure or in crisis the tools they need to support their children and stay together,” she said.

“We invested more than $335 million in the last Victorian budget to support the transformation – including to deliver a new model for family preservation and restoration programs, in line with our road map for reform.”