A Stitch in Time has an A-list Australian crew behind the scenes – just not from the current century. That’s part of the point: it’s a film that says it’s never too late to follow your dreams, or dump a husband who’s a waste of space.

Glenn Shorrock – that Glenn Shorrock – plays Duncan Miller, a washed-up geriatric rocker with a mean streak and a foul mouth. After years surviving on one gig a week at his local RSL, even that peters out. Maggie Blinco plays his long-suffering partner Liebe, whose only crime is to love a man who blames everyone but himself. So far, we have a variation on the plot of A Star is Born. 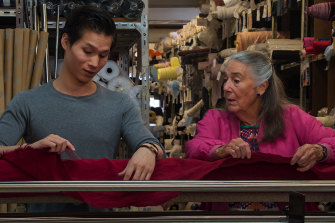 Maggie Blinco and Hoa Xande in A Stitch In Time.Credit:

The crew mixes vast experience with youth: the director is on debut, but Sue Milliken is one of the producers and the great Don McAlpine shot it. Belinda Giblin does fine work as Liebe’s rich but lonely friend Christine. In what must have been one of his last roles, John Gregg plays her husband Justin, who made millions after he turned his back on the band. Duncan reserves a special scorn for Justin.

Shorrock and Gregg go at each other like two pit bulls under a blanket – or two musicians who never held back, way back. Their scenes crackle with humour, but so do those between Blinco and Giblin. Writer-director Sasha Hadden has a facility for comedy; all he needs now is control of his sentimentality.

The film will stop at nothing to make us cry. It’s a feel-sad movie on its way to being feel-good. Liebe lost her parents in the Holocaust; she just got out of Germany on a kinder transport – the trains that took Jewish children out just before the war. She was a dressmaker, before Duncan destroyed her self-confidence.

With the help of a young Australian-born Chinese man at Balmain markets (Hoa Xande), Liebe starts to sew her way back to independence. It’s a craft-driven comedy, in that sense, with some good textural scenes about cloth and cutting and design. There are homilies too, about doing things the hard way or not at all. Hadden leaves nothing to chance: we must eat our full pudding, treacle and all.

I was shocked at how good Shorrock is. He is totally, and suspiciously, credible as this cranky old bugger. Either music’s gain was acting’s loss or Hadden cast him to type – hopefully the former. I expected a fine turn from Blinco, whose vast experience allows her to play her role like a violin. There are no bad performances here. Even so, the director should retire his trowel. Trust your material, trust your audience.