Far from a lost masterpiece, Glyndebourne’s unmissable take on The Wreckers is one of the best things its festival has done in years

First the bad news; Ethel Smyth’s 1906 dramatic opera The Wreckers is not a lost masterpiece. Far from it, in fact.

Now the good news; Glyndebourne’s new production, which launches its 2022 season, is one of the best things this erratic festival has done in years. Read the fascinating back story and go, or hear it at the Proms on July 24.

It’s hard to imagine a better case being made for a flawed but fascinating opera. 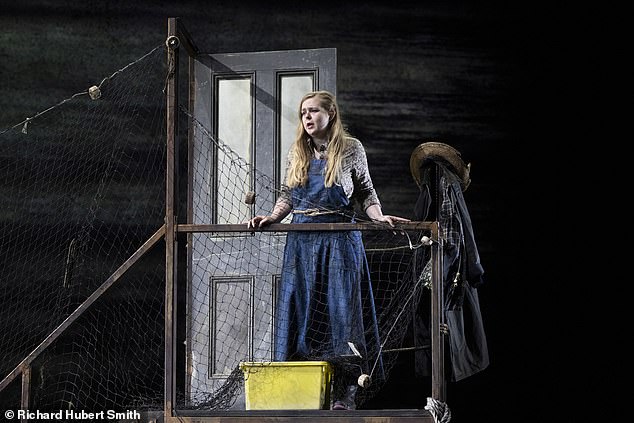 The singing is generally good, notably Philip Horst’s Pasko, the wreckers’ ‘spiritual’ leader, and Karis Tucker (above) as his disillusioned wife Thurza

Ethel Smyth had great confidence, both as a woman and as a composer. She had the courage to come out while Queen Victoria was still around. And she had an encyclopaedic knowledge of the music of her time.

The Wreckers is full of references to contemporaries from Debussy and Grieg to great gobbets based on Wagner. But sadly these influences are not fully absorbed, merely noticeable.

However, the writing for orchestra, and especially for the hard-worked chorus, is often exceptional, as in the opening pages of Act 2, frequently played at concerts between the wars as an orchestral interlude.

The contribution of the chorus at climactic points is also undeniably impressive.

Especially as performed here by 75 members of the London Philharmonic squeezed into the pit, and a well-schooled chorus, rushing hither and yon on stage, under the baton of Robin Ticciati, who has worked hard to make the most of this elusive piece.

What makes it all so difficult is that Smyth couldn’t write a tune. There isn’t a single melody you will recall five minutes after the final curtain comes down.

But the impression that will remain is of a piece of real grandeur and imagination.

The singing is generally good, notably Philip Horst’s Pasko, the wreckers’ ‘spiritual’ leader, Karis Tucker as his disillusioned wife Thurza, Rodrigo Porras Garulo, a most promising tenor, as her lover Marc, and last, but not least, young Lauren Fagan as Avis, the daughter of the lighthouse keeper, who turns off his light at crucial moments to lure the ships on to the rocks.

I repeat: one of the best things the Glyndebourne Festival has done in years. Unmissable.