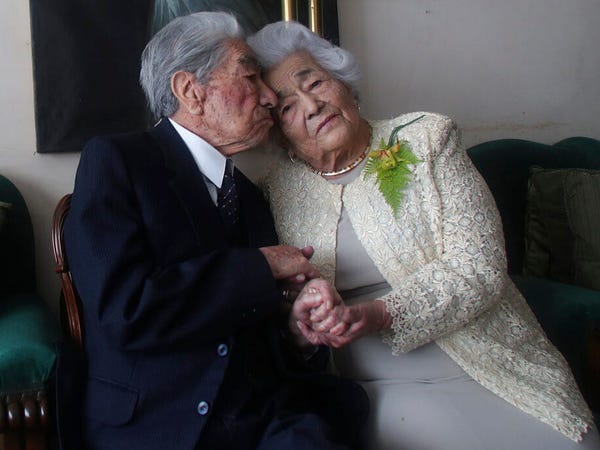 Julio Cesar Mora Tapia, 110, and his wife, Waldramina Maclovia Quinteros Reyes, 104, have been married for 79 years and counting.

If that's not an accomplishment in and of itself, Tapia and Reyes are now officially recognized by Guinness World Records.

The world record organization recently certified the pair as the world's oldest married couple with the highest combined age: 214 years.

The Quito, Ecuador-based couple met during Reyes' school vacation. She was visiting her sister, who was Tapia's neighbor. Tapia and Reyes started a friendship and fell in love.

According to Guinness World Records, Reyes loved Tapia's talent for writing poetry, and Tapia was captivated by Reyes' beauty and character.

Seven years after they met, the pair got married in 1941. They tied the knot in a secret ceremony because their families did not approve of the marriage.

However, the couple proved their relatives wrong and have had a long and happy marriage.

"It was not easy because our relatives did not have a good relationship, but with time and patience, we were able to unite them, and we became an example and the best reference for the younger generations," they told Guinness World Records.

Tapia and Reyes spent years as teachers, and they had five children together, each of whom went on to get college degrees. The couple considers that one of their greatest achievements.

Tapia and Reyes love going to the movies together, gardening, and having big family dinners. Though they have not been able to get together with their extended family as of late due to the coronavirus pandemic, they are looking forward to reuniting, they told Guinness World Records

The couple said that their "secret formula" for their long marriage is a combination of love, maturity, and mutual respect.

Prior to Tapia and Reyes, Japanese spouses Masao Matsumoto and Miyako Sonoda were the oldest living married couple. They were married for 80 years and had a combined age of 208 years.

Representatives for Guinness World Records did not immediately respond to Insider's request for comment.

World's oldest living person honored by Guinness Book of Records — she's 116, lives in Japan, and has a favorite board game

After celebrating her 20th birthday, August the rescue dog is the world's oldest golden retriever