Australia’s power industry has hit out at the Morrison government’s plan for a taxpayer-funded gas-fired generator, describing it as an unnecessary market intervention that risks derailing vital future investments needed to transition the energy grid.

On Wednesday, Federal Energy Minister Angus Taylor gave a go-ahead to the Commonwealth-owned Snowy Hydro to build a $600 million, 660 megawatt generator in NSW’s Hunter Valley to supply on-demand energy into the grid when gaps in power supply emerge. 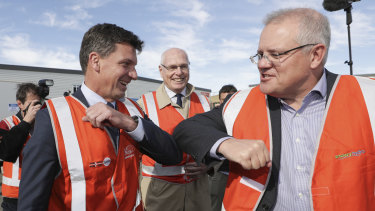 The decision came after Mr Taylor’s repeated threats that the government would develop its own generator if private industry failed to commit to building 1000 megawatts of additional generation capacity by April 30. Mr Taylor insists that amount of “dispatchable” power – such as gas plants or batteries – is necessary to keep a lid on power bills once AGL closes its Liddell coal-fired power plant in 2023.

The Australian Energy Council, representing the nation’s big power suppliers including AGL, Origin and EnergyAustralia, on Wednesday immediately warned that the rising tide of government intervention in the market was deterring the very private investment Mr Taylor says is needed.

“This is because, as noted by the federal government’s own energy advisers, the Energy Security Board, interventions or ‘even discussions and threats’ of intervention’ act as a deterrent.”

Ms McNamara said gas-fired generation had a role in maintaining confidence in the energy grid on the pathway to net zero emissions, but said investment should be driven by “market dynamics and independent expert assessments” rather than public funding.

She cited recent interventions including a NSW government energy plan to bring on more renewables, and its funding support for EnergyAustralia’s Tallawarra gas plant, which is now set to contribute 316 megawatts of dispatchable capacity by the Summer of 2023.

It was “still not clear” why an additional 1000 megawatts of capacity was needed to compensate for the closure of Liddell, Ms McNamara said, adding: “The market operator’s analysis does not support that assertion.”

The Clean Energy Council’s latest survey of its members, who are renewable energy developers, found that “unpredictable and unhelpful government interventions in the market” were their second biggest challenge behind gaining access to the power grid, according to chief executive Kane Thornton.

The Australian Energy Market Operator (AEMO) has forecast a maximum 170 megawatt shortfall from Liddell. Mr Taylor said 1000 megawatt of additional capacity would force the market down and lower power bills. The government said the Kurri Kurri project would create 600 jobs during construction.

“If we don’t do that, we’re going to see a 30 per cent increase in the wholesale price in the short term and substantially more in the longer term,” Mr Taylor said.

“This is a good day for jobs. It will create jobs during construction of course and ongoing jobs but importantly the jobs of all of those workers who rely on affordable, reliable energy for their living, for their businesses.”

A government-commissioned report on the effects of the Liddell closure forecast prices would rise to $80 a megawatt-hour by 2024 if no extra dispatchable capacity came online before Liddell shut.

But Grattan Institute energy program director Tony Wood said the Liddell report used old data and was already outdated, with NSW wholesale prices falling to $39 a megawatt hour for the first quarter of this year.

The Kurri Kurri plant flooding the market with government-funded dispatchable power would not reduce prices long term, but could force private generators out, Mr Wood said.

“Gas is expensive, the idea you can use it to bring prices down is silly,” he said.

“The Liddell taskforce said prices would go up regardless of what type of power [gas, hydro, or batteries] you replace it with. The government’s argument makes no sense.

“This puts more pressure on Bayswater and Eraring (black coal plants). They could be left saying ‘we can’t survive’.”

The Morrison government looks set to try to wedge the Labor party over its position on gas – which is opposed by many from its left faction and welcomed by many on the right.

Labor climate change and energy spokesman Chris Bowen said he supported gas as a back-up for renewables, but the Kurri Kurri project “isn’t justified by the economics”.

“The government’s chair of the Energy Security Board, the widely respected Kerri Schott has said and I quote, ‘It doesn’t stack up because it’s expensive power’,” Mr Bowen said.

“This is a result of poor policy, of eight years of policy failure and a government not up to the job when it comes to energy policy.”

“You’ll struggle to find a fossil fuel project that will stand on its own two legs given the projections from the conservative International Energy Agency around the competitiveness of these projects in a future that meets the Paris Agreement obligations,” Mr Merzian said.