If you don’t like personality politics, if you think an election campaign should be a contest of ideas not a contest for headlines, Victoria is not the place to be.

If this election descends into a blur of name-calling, blame Labor. The Liberals may follow, but Labor has been the first into an ugly attack mode. 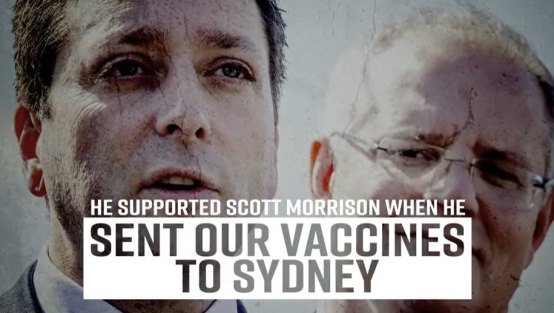 The sloppy, old-fashioned and extremely personal advertising campaign they launched last week was a blue-tinged version of “reds under the bed”.

It painted the Opposition Leader as “the cuts Guy”, accused him of being weak dealing with drunken front benchers, blamed him for the federal decision to send COVID vaccines to Sydney, and reached back almost 10 years to decisions that barely involved him.

It was a reminder that in Victoria there is no legal requirement to tell the truth in political advertising. The government had a chance to fix that and didn’t. Strange, isn’t it?

But this attack strategy is dangerous for Labor. It underlines integrity as an issue, where the premier has far more questions to answer than Matthew Guy.

Still more lurched forward on Friday when The Age reported yet another IBAC inquiry involving the premier. Following legal proceedings, it was reported Andrews had been questioned about potentially corrupt payments of $3.4 million to a union. 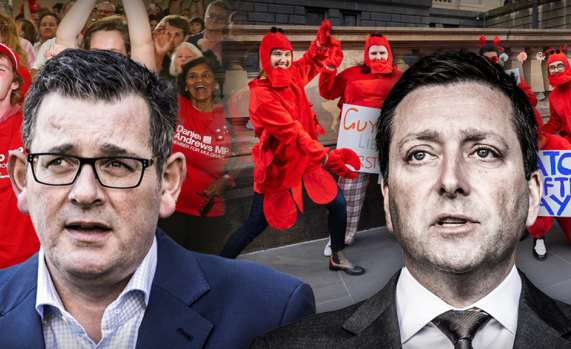 Integrity is turning into a major issue in the November state election campaign.Credit:Fairfax Media

By comparison, Guy looks sparkling. He has not been in front of the corruption commission He didn’t promise 4000 ICU beds and then deny saying it. He has not said “I cannot recall” when tough questions are asked around the pandemic.

And he didn’t lead a Cabinet that refused to cooperate with police when public money had been rorted.

True, there are always more tough questions for the person in power, but Guy also has questions to answer, most notably about the smoke and mirrors surrounding attempted payments to his former chief of staff. Apart from that, as leader the biggest public question of integrity was to turn up at dinner with a man with whom nobody sensible would break bread.

And that would have been forgotten if not for the immortal headline “Lobster with a mobster”.

Of course, it’s legitimate to trawl through his time as planning minister, but if there was a spark there you would assume the government would have ignited the fire by now. Perhaps they still will.

The second reason the Labor advertisement is risky is that it gave Guy more publicity than he’s had in weeks. For a man keen to be noticed, perhaps any attention is good attention.

So if this is to be a personal campaign, let’s dig into why Sportsbet on Saturday had Labor at $1.05 and the Opposition at a disastrous $7.50 even after the latest IBAC revelations. Let’s look at people not policies:

Premier Daniel Andrews is a hard man. He sends critics and former friends to the “freezer” or throws them under the political bus. 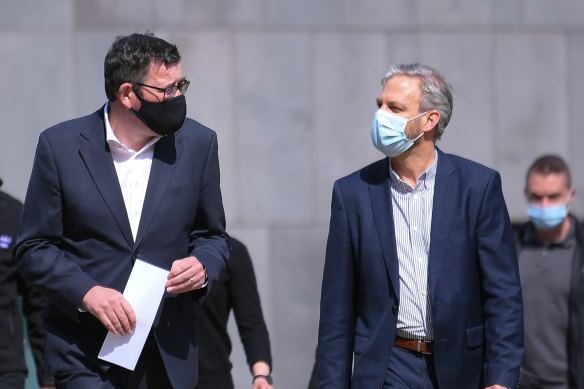 Publicly at times he lacks empathy. He has built an office and a huge staff that bypasses the usual democratic process and runs Victoria like his personal kingdom.

He deflects and spins and contradicts statements when there’s proof he made them. He stage-manages fights with the church for political reasons.

Some say privately he is warm and caring. Perhaps he is. I’ve known him for at least 10 years and have had many private meetings. The warm and caring stuff vanished quickly when the questions began.

His strength is that he looks as though he knows what he’s doing, even when he doesn’t. He’s seen as a strong leader, and in many ways is. But it’s legitimate to ask whether that strength is dedicated to governing for the people, or looking after mates and holding power for the sake of it.

That’s your decision to make when you vote.

Then there is Guy. He can appear an angry man. It’s true he is passionate, and that passion sometimes spills into aggression.

Privately, and I have also known him for years, he can be warm, engaging and funny. This rarely comes across to the public, which is in itself a criticism. Too often from both leaders we get a caricature of what they think we want rather than what they are.

Guy can be sloppy with detail, evasive when he should be direct, and sometimes looks indecisive. His handling of the Tim Smith mess raised questions about his leadership style. Even when he knows what he’s doing he doesn’t look confident.

If Andrews appears strong, Guy looks innocuous. He hasn’t embedded in the public mind what he is because at times he seems not to know himself.

But there’s new momentum about the Opposition this weekend. A Newspoll showed the primary vote tied on 37 per cent and more than a quarter are considering voting for minor parties, which highlights the danger of the IBAC developments and the Labor attack strategy.

If the poll and the bookies are right, the premier will walk it in. But there’s a hint of panic about the government. Voting begins Monday November 14 and the next eight days could be defining. With the poll and the IBAC developments, the opposition has an unexpected surge in confidence. Harness and maintain that, and they’ve got the merest whiff of a chance.