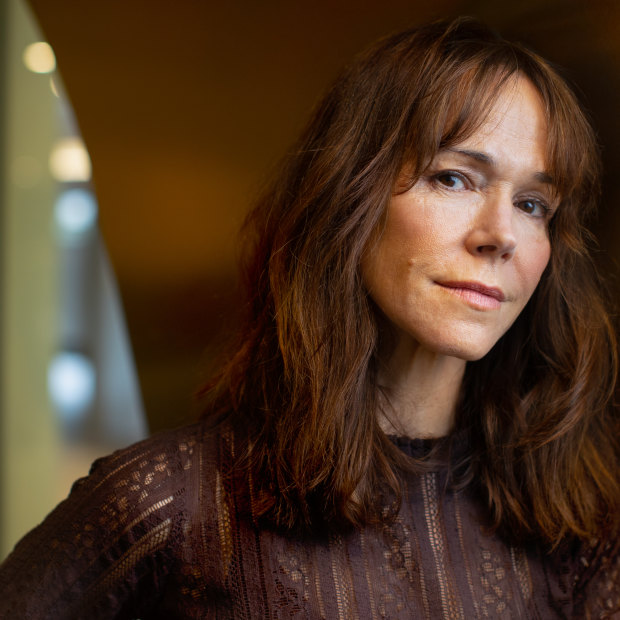 Frances O’Connor has made her debut as a writer-director with Emily, a film that merges elements of Emily Bronte’s life with her most famous work, Wuthering Heights.Credit:Simon Schluter

It’s almost impossible to think of Wuthering Heights without also thinking of Kate Bush. But Frances O’Connor insists the 1978 classic wasn’t heard once on the set of Emily, a film that’s part biopic and part attempt to imagine how the youngest Bronte sister came to write one of the most enduring novels in all of literature.

Nor did O’Connor watch Andre Techine’s gorgeous 1979 film, Les Soeurs Brontes (The Bronte Sisters), in which Isabelle Adjani played Emily (with Isabelle Huppert as Anne and Marie-France Pisier as Charlotte). And Andrea Arnold’s brooding 2011 film adaptation of Emily’s only novel was similarly off-limits, too. 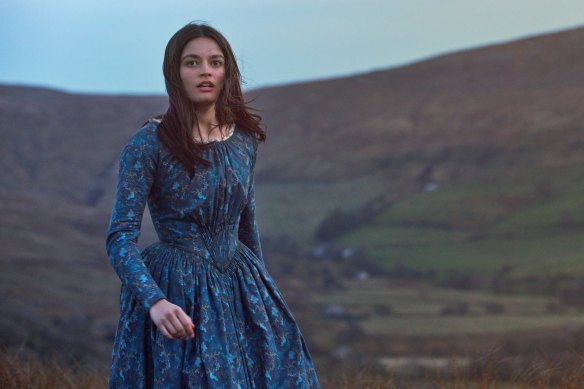 “I just wanted to let this be original, to have its own kind of voice,” O’Connor says of her feature writing and directing debut. “It’s very easy to get influenced by other people.”

We’re meeting in Melbourne, where English-born, Perth-raised O’Connor made her film debut in the much-loved uni-student rom-com, Love and Other Catastrophes, 26 years ago.

As we chat in the communal dining room on the roof of a St Kilda Road apartment block, her Scottish-born husband, Gerald Lepkowski – also an actor; they’ve been together since meeting at the West Australian Academy of Performing Arts 30 years ago, and have a 17-year-old son – emerges from the gym. He pops in to say hi – I interviewed him years ago, and he either remembers or he does a very good job of faking it – then wanders off in search of the shower. There’s not a lot of airs and graces with this pair.

Back in interview mode, O’Connor says that while Bush’s song wasn’t on the playlist, music was a crucial part of the two-week rehearsal period for Emily. “We had a band, drums and guitar and keyboard. Everyone would turn up at nine, we would dance until 10, and then we’d rehearse. It was just a great way to start the day. I think art should be fun. Why should it be so serious?”

That sense of lightness infuses Emily, but it would be unthinkable for a film about the Brontes to not have an air of darkness, too. Though their literary accomplishments were spectacular, the lives of the three sisters and their brother, Branwell, were short and full of tragedy. Any story about them – however much it’s a hybrid of fact and fiction – can’t help but be informed by that, too.

The eldest two sisters, Maria and Elizabeth, died as children. By the time Emily was three, her mother (also Elizabeth) was dead, too. Charlotte, the longest-lived of the six children, was 39 when she died, leaving behind a substantial legacy of four novels, including Jane Eyre, and a volume of poetry co-authored with Anne and Emily, and initially published as the work of “brothers” Currer, Ellis and Acton Bell. 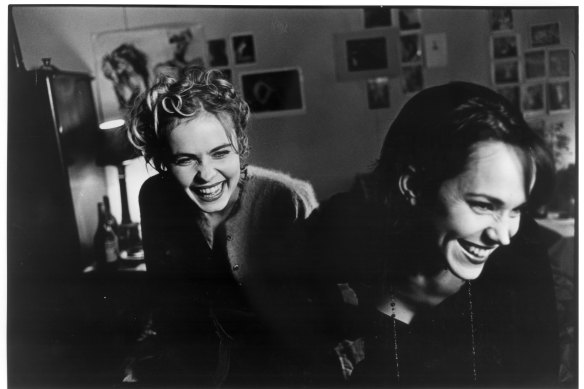 Anne published two novels and was dead by 29. Emily managed just the one, and a year after Wuthering Heights was published to mixed reviews, she, too, was dead, aged 30. Branwell, who fancied himself an artist but was increasingly in thrall to alcohol and opium, died at 31.

Needless to say, the spectre of death hangs over Emily.

The film opens with its heroine (a marvellous Emma Mackey, of Sex Education) sprawled on a chaise longue, racked with consumption and being berated by eldest sister Charlotte (Alexandra Dowling) for the book she has written. Is it moral outrage or just jealousy? As the film unfolds, it becomes clear it’s both. Emily’s Gothic romance was shocking to Victorian sensibilities, but was embraced all the more fervently for it and Charlotte can sense how groundbreaking it is, even as it repulses her.

Wuthering Heights made a big impression on O’Connor, too. She first read it as a teenager on the 45-minute journey she made daily from Lesmurdie in the outer eastern suburbs of Perth to Mercedes Ladies College in the city.

“I remember going into that world on the bus and looking up and feeling like I’d been somewhere,” she says. “The book really spoke to me at that age. These two characters, Heathcliff and Cathy, who were kind of disenfranchised and rebellious and no one understood them.”

“I think that’s every teenager. Definitely, I felt anxious growing up – I’m an introvert, so sometimes I found socialising challenging.” 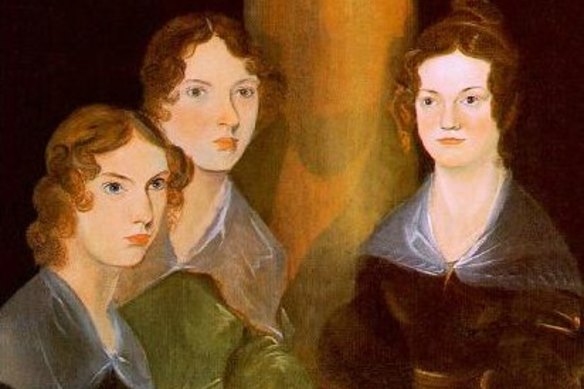 The only known contemporary portrait of the Bronte sisters was painted by their brother Branwell, circa 1834.

The idea of revisiting the world of Emily Bronte came to O’Connor more than 20 years ago when she visited Haworth, the Yorkshire town in which the family had lived, after she’d filmed her first big international picture, Mansfield Park.

“I walked out on the moors and thought, ‘Oh, I’d love to write something one day’, and then I just forgot about it for ages and followed my path as an actress,” she says. “Eventually, I really wanted to start telling my own stories, so I went back to the idea of this.”

About a decade ago, she first put pen to paper on what would become Emily. She wasn’t driven by the need to create work for herself, she tells me, as the acting roles have come with gratifying regularity. “I’ve just always been someone who’s written. When I was at drama school, I did self-devised pieces that people loved, and I think it’s something that I’ve always been meant to do. I felt like I had a real calling to it at a certain point.”

She’d work on it, put it away, come back to it. It was a pet project to play with between acting jobs, until eventually she felt it was time to either get serious about it or move on.

She organised a couple of readings of it, with actor and director friends, after which everyone was asked to give their feedback. “And it was pretty brutal,” she says. “People said things like, ‘your story has no spine’.” 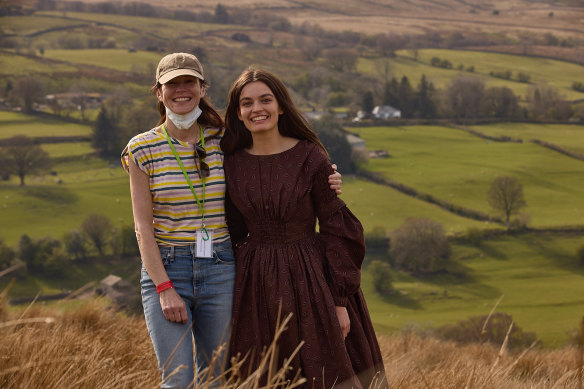 O’Connor and her leading lady, Emma Mackey, on location in Yorkshire.Credit:Madman

But they also said what they did like. “So I just kept doing it until eventually people stopped giving notes, and I knew we were kind of there.”

O’Connor has had no formal tuition as a director, but her on-the-job training has come from some of the best in the business. “Being on a set with Steven Spielberg and watching what he does and how he works, you think, ‘Well, how do I want to do it’,” she says.

Even so, “if you’ve been on a set most of your life, stepping into that director’s seat is just different. It’s daunting because there’s certain things you can’t know about until you do it. But the great thing is you have a lot of people who are experts at what they do, and they’re supporting you.”

Her film is a kind of patchwork that fuses Wuthering Heights and the scant known biographical details to generate an imagined version of Emily Bronte’s life in which the assumption is that at least some of what’s in the book must have been inspired by her own experiences.

“It’s me using my imagination to create this world with things from Wuthering Heights, things from Emily’s life, and things from my life as well, to tell this story about a woman forming herself against the patriarchy, against what is the norm and how she’s supposed to be,” says O’Connor.

It’s fanciful, but anchored. “We tried not to have any bullshit in the story,” she says. “I told everybody ‘bring your real self’ because people connect to it if you try and be real – not earnest, but real with everything: now you’re funny, now you feel shitty, now you’re this and that. If you’re all those things, then people connect to it in a way that I think makes them think it’s modern. Maybe. I don’t know.”

The film’s Emily is of course extremely close to her brother, but O’Connor has no truck with the idea that theirs was an incestuous relationship. “Definitely not,” she says insistently.

“But what’s interesting is that Heathcliff and Cathy think they’re the same person in the book, and that’s the state you’re in as a child with your mother before you separate. I think it’s interesting that Emily chose to bring that out in the story, even though she was very young when she lost her mother so it would have been just unconscious in her.”

“Stepping into the director’s seat is daunting. There’s certain things you can’t know about until you do it.”

The film’s Emily has a consummated romance with Weightman, the curate who comes to assist in the parish where the Brontes’ father is the vicar. There is no evidence that Emily had a sexual relationship with anyone in real life – “No, you’ve just gotta hope,” O’Connor says with a laugh – but there’s enough circumstantial evidence to suggest she might at least have had the opportunity.

There was a real William Weightman, and some have conjectured that he had a romantic connection with Anne, though some feelings may have existed between him and Emily, too.

“There was a period where it was Weightman, Branwell and Emily kicking around the parsonage for two years while Charlotte and Anne were off being governesses or educating themselves,” says O’Connor. “And I always felt like, what happened then? Not that she had an affair, but she would have been sitting watching those guys … I’ve always felt like Branwell was a prototype for Heathcliff and Weightman was a prototype for Edgar [Linton, whom Catherine marries], and that maybe they influenced her writing it.” 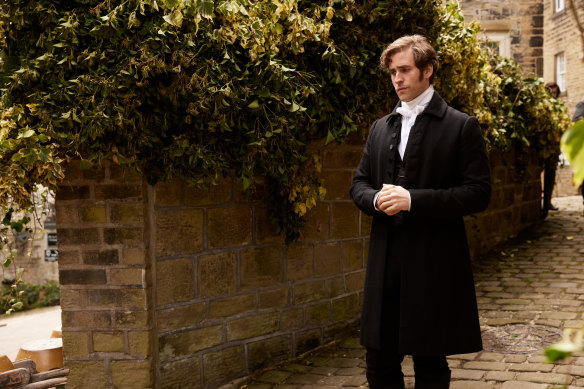 Oliver Jackson-Cohen as William Weightman. The character was real, but his relationship with Emily is purely speculative.Credit:Madman

O’Connor likes to think of her film as occupying something of the same relationship to the facts of her subject’s life as Amadeus does to Mozart’s. “That’s an exploration – with these characters who were real, Salieri and Mozart, even though they never met – of how do you deal with your own mediocrity when you’re faced with greatness, why did God not bestow those gifts upon you? And that’s a great story.

“I would say Emily exists in that world. It’s a story about what it is to be authentic as a woman, and the cost of that, and how can you be your true self.”

And what of your true self, Frances O’Connor? Now you’ve cut your teeth as a writer-director, how do you feel about stepping back in front of the camera again?

“It’s a story about what it is to be authentic as a woman, and the cost of that.”

“I don’t know if I feel as passionate about it,” she says of acting. “Maybe for the next couple of years, I’d like to direct. It feels like I’m in a slightly liminal space where it’s gone better than I thought it was going to go, we’ve got really lovely reviews, and I really enjoyed it.

“I don’t know,” she adds. “I don’t feel any particular urge to jump back in when I’ve just had this great experience doing something else.”

Emily is in cinemas from January 12.