Warning: this article contains spoilers for the finale episode of The Bold Type.

The series finale of The Bold Type reveals Scarlet magazine’s next editor-in-chief: Kat (Aisha Dee), who is initially confused by the sudden job offer.

“You fired me, and now you’re asking me to take over for you?” she asks the outgoing editor, Jacqueline (Melora Hardin). “I mean, I’ve changed since then, but I’m always gonna be a fighter. If there’s injustice, I’m not just gonna sit back — like, I can’t.”

“And that is the kind of leader that this magazine needs,” Jacqueline assures her. “I was trying to replace myself with someone like me, but someone like me is not the future of Scarlet. You are, Kat. And I’m sorry that it took me so long to see it.” 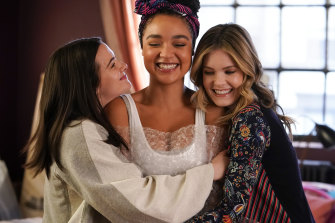 That “someone” was Jane (Katie Stevens), whom Jacqueline first approached for the magazine’s top position. But Jane, whose tenure as an editor included getting romantically involved with one of her writers and completely neglecting another, craves a full-time return to writing. “Leading people, board meetings, strategy decks, ad sales — it isn’t my passion,” Jane tells Jacqueline.

Those things have always come naturally for Kat, Scarlet’s former head of social media who once squeezed a podcast out of a bartending gig and had just sold Jacqueline on a new vertical sprouted from an art installation. And though Kat hadn’t been employed at the magazine for some time, the writers had long decided that she was the show’s editorial endgame.

“Ever since the pilot, Kat has always been a leader and a force who created change — she changed up the hiring process, she introduced new initiatives, she went up against the board — so she really was a natural fit,” said showrunner Wendy Straker Hauser. “Her time away from Scarlet was really about her finding herself and learning that she can capitalise on all the great things that come from this place but also not lose herself in the process.”

Throughout its five seasons, the series, which airs on Stan (the owner of this masthead), has regularly romanticised the media industry with unrealistic subplots (like winning a prestigious award for an article written about one’s boss or breaking into a printing press to steal issues). It’s catnip to writers and editors who enjoy nothing more than to grouse about pop culture misrepresenting the work of writers and editors (see also: Girls), especially when it comes to the rarefied world of glossy magazines (see also: The Devil Wears Prada). 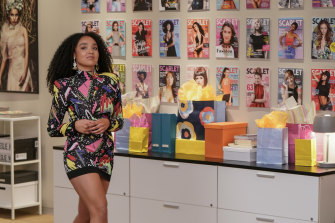 On a high: Aisha Dee as Kat.

In this context, Kat’s appointment as Jacqueline’s successor might be seen as one last twist: Unlike a short-lived web editor (Peter Vack) who called the Scarlet site “the dot-com,” this plot turn echoes the real-life changing of the guard that’s taken place at numerous media companies. When Jacqueline, who is white and straight, tells Kat, who is biracial and gay, that “someone like me is not the future of Scarlet,” it is a deeply layered line.

“We were trying to say that hiring someone because you see yourself reflected back is not helpful for any kind of change,” explained Jessica Kozak, who co-wrote the episode with Lara Azzopardi. “Kat has always gone about things differently, taking big risks while holding on strongly to her convictions. We wanted to show that you don’t have to fit into a mold to be successful.” 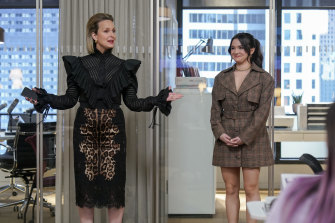 Jacqueline’s apology to Kat also speaks volumes. “She is a woman in power who is confident enough in her abilities and contributions to not be threatened by the younger women coming up behind her but also to take it upon herself to mentor them,” said Hardin. “And it really is the most powerful move to be the person that can admit where something hasn’t been quite right and to correct that with grace and integrity.”

Overwhelmed with emotion, Kat tearfully accepts the job on the spot — an emotion that wasn’t explicitly scripted. “I have this habit of constantly underestimating the way these days are actually going to make me feel,” said Dee, who was surprised by her own sentiments on set. “Our director told me, ‘Just allow yourself to feel what’s actually happening,’ and thinking about everything Kat has been through over the past five years, I just went with it.”

The episode also sees the resolution of the romances between Kat and photographer Adena (Nikohl Boosheri), who had asked for a committed relationship, as well as Sutton (Meghann Fahy) and Richard (Samuel Page) , who chooses their marriage over his dreams of parenthood.

During the central trio’s final scene in the fashion closet, Jane announces that she’s quitting Scarlet to travel. “I have to let go of my safety net, however scary that may be,” she tells Kat and Sutton. “This is my time to be in the moment, to take risks and to embrace all the opportunities my mum never got to.”

“Jane was always most confident about exactly where she was supposed to be,” said showrunner Hauser. “We thought it’d be fun to explore what happens when you get there. If it doesn’t feel right, do you push through anyway because that’s what everybody expects of you and what you expected of yourself? Or do you actually allow yourself to pivot in a different direction and see how things play out?

“We’ve always tried to tell interesting stories about women at a crossroads in unexpected ways,” she continued. “That journey of discovering what ultimately isn’t for you might be unexpected and yet is also a very real and important story to tell.”