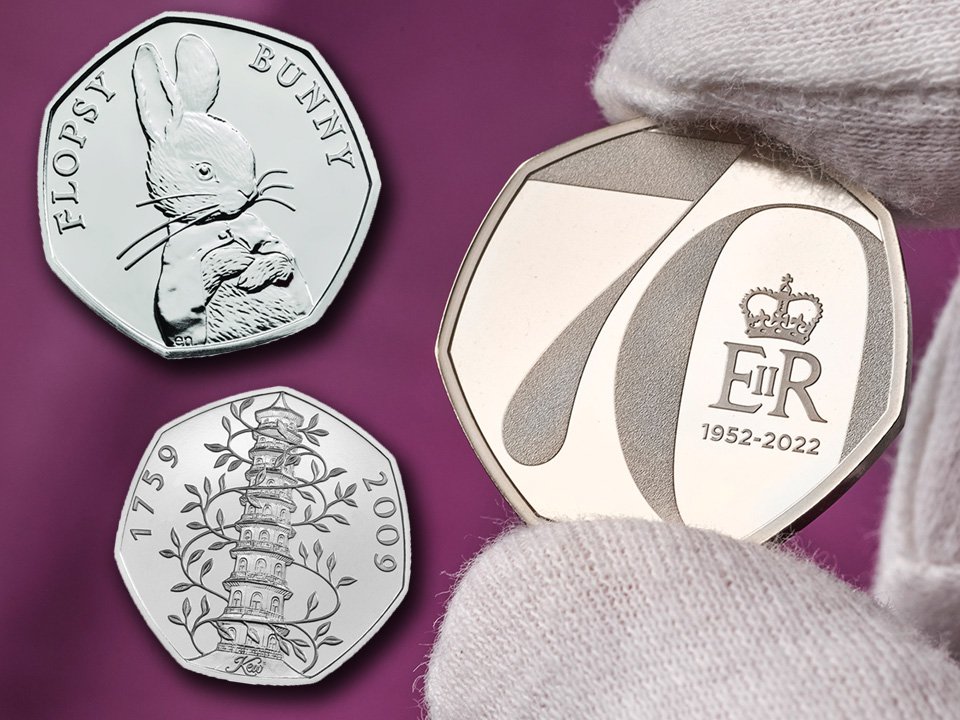 If you think all 50p coins are worth the same amount, you’d be dead wrong.

Yep, some of the hexagonal silver coins we use every day can actually be worth as much as £20 – if they feature a unique design, and a limited number of them were minted.

One special piece is even worth a jaw-dropping £700. Well, it’s certainly jaw-dropping if you’ve got one languishing at the bottom of your wallet.

And for 2022, there’s a new Platinum Jubilee coin coming into circulation, and a range of special edition coins which will mark The Queen’s historic 70-year reign.

Intrigued? Let’s take a look at some of the most valuable 50p coins around today.

What is the newest 50p piece?

As the Royal Mint rightly notes, The Queen’s Platinum Jubilee (and the resulting bumper bank holiday weekend we’ll be enjoying) is a once-in-a-lifetime experience.

Therefore it’s only fitting that a commemorative coin is minted in honour of the occasion.

The new 50p design features a large number ’70’, with ER (standing for Elizabeth Regina) and the dates of The Queen’s reign – while the flipside of the coin shows The Queen on horseback.

It’s commonly-known that The Queen has a passion for horses, and Her Majesty is believed to have approved this design personally.

The new 50p will be in circulation from February 7, with 1.5 million coins being released by Royal Mail post offices from this date onwards.

5,000,070 of these coins will be produced total, meaning it will become fairly common – and eventually not worth much more than what you’d assume: 50 pennies.

Special edition versions will be worth a lot more, and there’s also a sold-out £5 Platinum Jubilee coin which won’t be circulated.

The 50p coins currently worth the most money

The Royal Mint has revealed the rarest (and therefore most valuable) 50p coins out there.

Currently, one is worth top dollar: the 2009 Kew Gardens coin.

‘The Kew Gardens (50p) remains the most coveted coin, with a mintage of just 210,000, but it’s always exciting to find a special design in your change.’

Also worth a pretty penny are 50p coins from 2011, depicting Olympic sports – which were released in celebration of the UK hosting the London 2012 Olympic Games.

The rare Wrestling 50p design, of which 1.12 million were circulated, it could be worth as much as £16.

Similarly, the Olympic Football, Judo and Triathlon coins were each released 1.16 million times. These coins have gone for as much as £25, £16 and £18 on eBay respectively.

And anyone with a 2018 Peter Rabbit or Flopsy Bunny 50p coin should know that, potentially, it could be worth £5. Only 1.45 million of these coins were circulated.

And while the 2018 50p piece depicting Paddington Bear, and the 2019 Sherlock Holmes coin, are pretty cool to find, they aren’t that really worth much – unless you spot one with a typo on it.

Yep, if you spot an incorrect date, typo or any other error on any type of coin, it’s worth giving it a Google search – as it could be worth a lot more than the coin’s initial value.

Finally, it seems that how much your rare 50p is worth depends on selling at the right place, right time.