HUNTER DAVIES: That call to say I was getting the jab was like passing the 11-plus

Yesterday morning at ten o’clock, I was leaving my London home to walk across Hampstead Heath to the Royal Free Hospital. Oh joy. I felt so happy to have been chosen to have the vaccine.

On the way, I met a posh woman of my age who lives in the next street. Showing off, I told her where I was going. ‘Oh, I’m waiting for the Oxford vaccine,’ she said, rather sniffily.

I had been praying all week to get the call. I’ve had such lovely letters these past few months from that nice Mr Hancock, who always signs himself Matt, as if we are chums, yet I don’t remember ever meeting him.

Matt has been constantly informing me I am on the ‘clinically extremely vulnerable’ list. 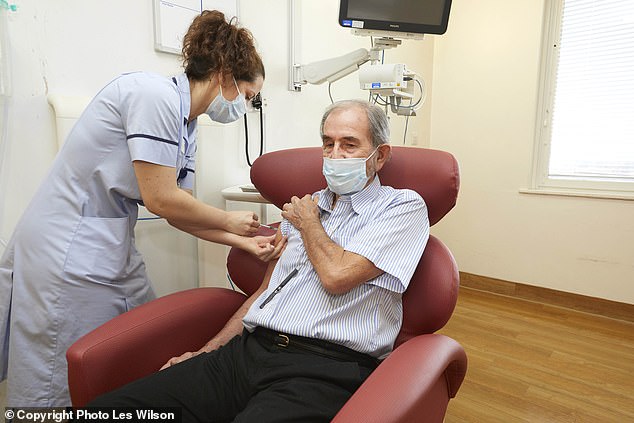 The gist of the early messages from the Department of Health to the elderly was to go nowhere, stay in bed, die quietly, don’t bother the NHS.

Now it turns out being on the vulnerable list has compensations.

The phone call came two days earlier from my GP surgery. I was on the bus at the time. I turned the volume up, so passengers could hear my fab news.

My details were checked, to make sure I was the right person, not some faker pretending to be on the vulnerable list.

Honestly, it was like being one of the chosen ones – like hearing you have passed the 11-plus. In my morning paper, I saw a photo of Marty Wilde, the 1960s pop star, having his injection.

He is a young man of 81, yet was chosen before me – 85 next month – not fair. He was giving the thumbs-up beside an attractive nurse. I wondered if I would get a round of applause at the Royal Free, flanked by a bevy of nurses.

I had to report to the 12th-floor Private Oncology Treatment Suite. Normally, this wing is for private patients only, so the furnishings and fittings are ever so tasteful – as are the staff.

I was greeted at reception by a very elegant young woman in a long skirt that would not have been out of place at a cocktail party. It was like being at The Ritz.

My wife died four years ago and I live on my own, but I do have a girlfriend, a young woman of 72. She offered to come with me. I said don’t worry, pet, I am a big boy. I don’t mind injections – I’ve had enough of them.

I did feel a bit of a fraud, sitting there waiting, surrounded by old people. I feel fit and well, still active, still working.

I suppose what makes me vulnerable is not just my age but that I had a triple bypass two years ago and am on lots of drugs.

I also inject myself every two weeks with an anti-arthritis drug. It has worked miracles, but apparently weakens my immune system. Also, I had bad asthma when I was young. 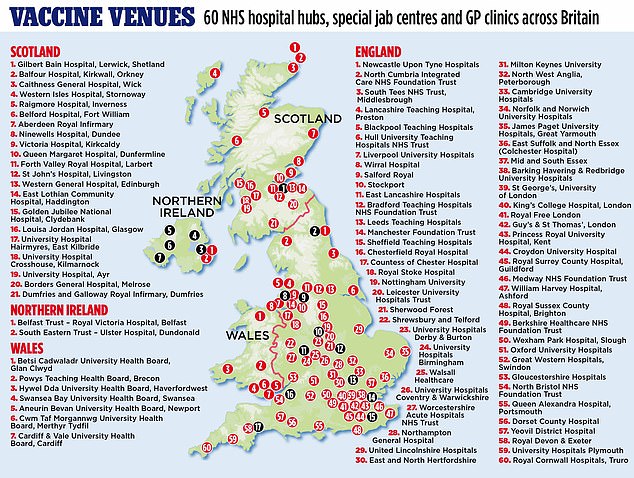 I don’t usually mention any of these boring things, or even think about them.

Finally, I had to be checked by a doctor – and by coincidence I knew him. Philip Lodge is a consultant in palliative care and he looked after my wife when she was in the local Marie Curie hospice.

He had volunteered to give up his Saturday, unpaid, to be one of the four doctors on vaccine duty yesterday. All the other staff I talked to had also volunteered.

‘I wanted to be part of history,’ one said to me. 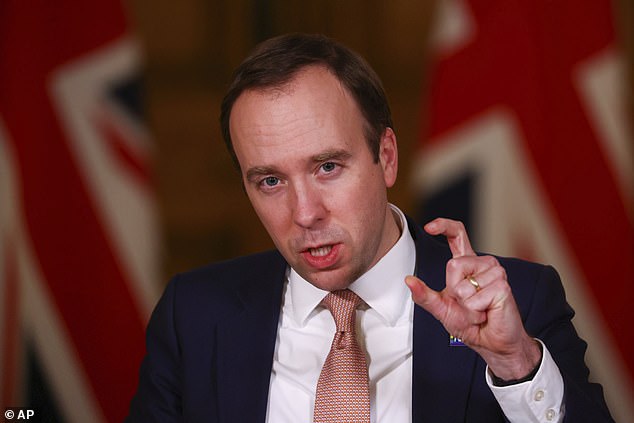 I’ve had such lovely letters these past few months from that nice Matt Hancock (pictured), who always signs himself Matt, as if we are chums, yet I don’t remember ever meeting him

The nurse was Junior Sister Marta Cravo, from Portugal. She had seven hours of special training earlier in the week, to learn all about the vaccine.

She did the injection beautifully, no pain at all. But then I am awfully brave – didn’t cry at all.

On the way out, I was given a card to prove I’ve had the Covid-19 vaccination. What a souvenir. Will keep it for ever.

It has the date for my second jab – January 7, which just happens to be my 85th birthday.

Brilliant timing, eh? It means I can dance at my birthday party. Even if it is just with myself…