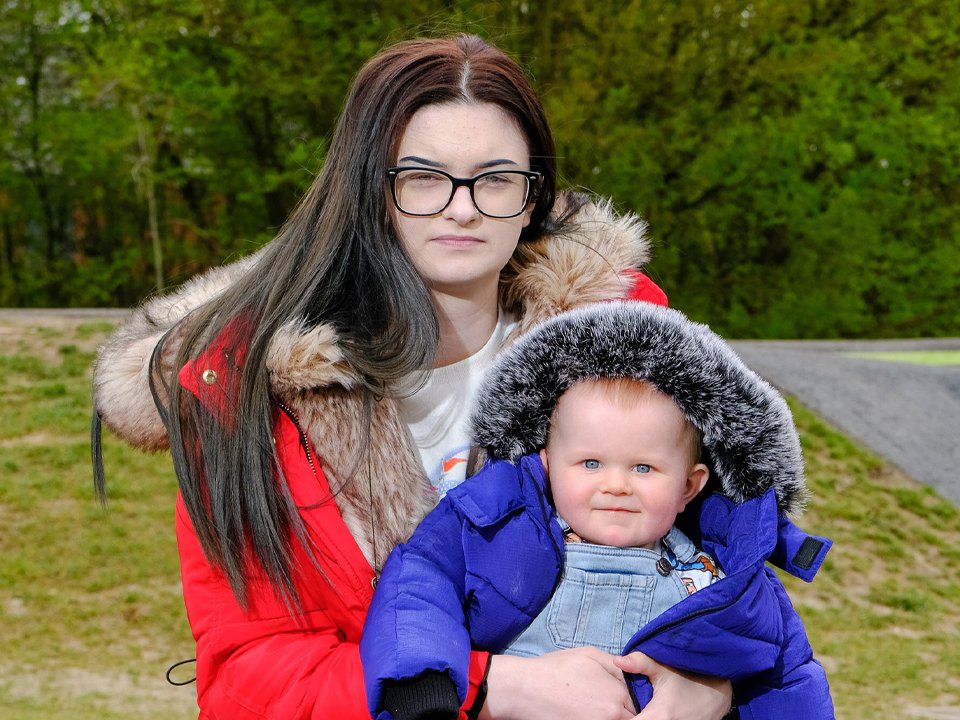 A 17-year-old girl had the shock of her life after having no idea she was pregnant until she went in to labour.

Ellisha Ford was still having periods throughout her pregnancy and says she didn’t gain any weight, which is why she had no clue she was carrying a baby.

Ellisha, from Coalville, Leicestershire says she had a completely flat stomach even up until contractions started, and she had even taken pregnancy tests which came back negative.

When she went to hospital with stomach pain, a doctor felt her stomach during which turned out to be a contraction, and ordered an ultrasound. Ellisha was in active labour, 6cm dilated and actually a staggering 43 weeks pregnant.

The teenager’s surprise baby boy Harper was born just hours later, and Ellisha says she has bonded well with her son despite his surprise arrival.

‘I had been shopping before he was born like usual and doing lots of walking it was all just normal things that I guess a nine month pregnant woman wouldn’t be able to do,’ says Ellisha.

‘My feet never swelled or anything like that either so I could still walk and had no pain.

‘I still had a flat stomach so had no idea. But as soon as the doctor put pressure on my stomach my belly just came out – it was all really strange.

‘And then they checked and I was 6cm dilated and told me I was going to have Harper that night. So I ended up having him five hours after I found out I was pregnant.

‘My weight never changed throughout at all and I was still fitting into my size 6 and 8 clothes.’

Ellisa went to the doctors in March last year – when she was unknowingly around four months pregnant – because she was suffering back pain.

She had blood tests and a pregnancy test – which came back negative – and was told her pain was most likely down to sciatica and an overactive thyroid.

Three weeks before her birth, Ellisha went to a walk in clinic – on what would have been her due date. Again she had back pain, but was told it was down to sciatica again.

‘Three weeks later I woke up in the morning with a really bad stomach ache and went to the hospital and they did a normal pregnancy test and told me I wasn’t,’ she adds.

‘A doctor did feel my stomach as I had a contraction and he told me that I was definitely pregnant but thought I was not too far gone and said I was probably just having a miscarriage.’

‘They then did a scan and couldn’t find him on the scan but then another doctor flipped the screen around and he saw and he just said I was actually full term. That was when I was in the delivery suite and it was just all really strange.

‘My mum told me that she had had my brother when she was quite young and she just came into the room and said there was nothing we could do, I would just have to get the baby out and stay as calm as I could.’

‘When he was born he wasn’t making any noise because he had swallowed lots of liquid so they took him off for ages,’ recalls Ellisha.

‘When they gave him back to me I was like, “wow he’s mine”. It was just really strange and I didn’t know what to think of it.

‘When he was born they had a look at him and my placenta gave it away that I was more than 42 weeks as it was black and dead.’

The shock was a lot for Ellisha to handle, but she actually thinks it was beneficial, in a way, not to have nine months of anticipation and worry.

‘It was a case of I’ve got this baby and I’ve got to look after him,’ she says.

‘The doctors said I was back to back and I also have a tilted womb as well so when he was being born I had to push a bit extra and I had to get him to turn a corner.

‘They did tell me if it had been known I would have had a planned c-section.

‘We did tell his father as well but I was petrified of telling him and when my mum showed him a picture and he just cried.

‘I did end up being in hospital for five days afterwards as I had really bad preeclampsia but Harper was perfectly fine and perfectly healthy.

‘I know this does happen to a lot of people and I will sometimes sit there and be like I’m so stupid for not knowing but it does happen people.’

Do you have a story to share? We want to hear from you.

Get in touch: [email protected]