A woman who was forced to give up her baby as a teenage mother has had an emotional reunion with her daughter 55 years later.

Marion Jones, 73, from Andover, Hampshire, was just 18 when her daughter Julie was born in a mother and baby home.

The teenager had fallen into a relationship with a man who hadn’t revealed that he was married, and who didn’t want anything to do with the little girl.

Marion spent just six weeks with her daughter before Julie was ‘snatched’ by social workers and adopted into another family.

Appearing on ITV’s Long Lost Family on Tuesday, Julie, now 55 and living in Birmingham, tracked down her long lost mother after being wracked with guilt that she had ‘ruined’ her birth mother’s life. 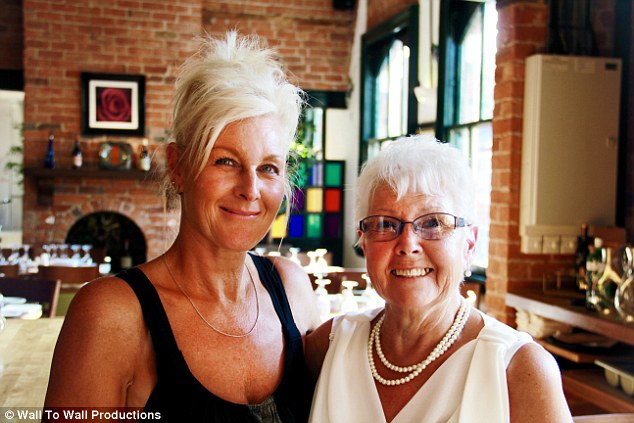 Marion Jones, 73, from Andover, Hampshire, (right) reunites with her daughter Julie, 55, from Birmingham, in this week’s Long Lost Family after she was forced to give her up for adoption in a mother and baby home

Cameras were rolling as the pair shared an emotional reunion, with Marion saying she felt ‘whole again’ after they reunited.

When they finally met, Julie threw her arms around her mother, as Marion said it had ‘been too long’.

‘Hello Mum, if I’m allowed to call you that?’ Julie said.

Marion replied that ‘of course’ she was allowed to say that, telling her long lost daughter how ‘beautiful’ she looked.

Julie had always known she was adopted and, when she was 18, she began searching for her mother, despite knowing few details about her life.

The search came to a standstill over 30 years ago, and Julie lived with the guilt that she had caused her mother pain in being forced to give her up. 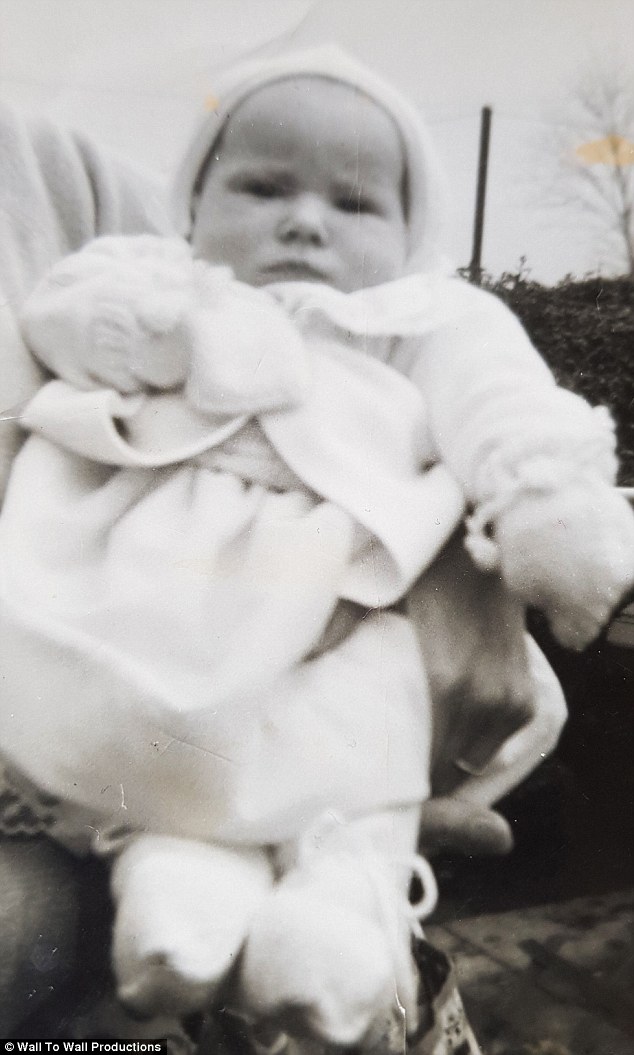 Julie told Long Lost Family she had enjoyed a ‘happy childhood’ but felt guilty for ‘wrecking [Marion’s] life’ by being the baby she had to give away. Pictured: Julie as a baby

She explained: ‘I changed a life and I have carried the guilt, which is not my fault obviously, but thinking, I hope I haven’t wrecked her life. Until I find out, that guilt will never go away.’

At first, producers struggled to track down Marion because of her common name, but they eventually located her after gaining access to Julie’s adoption file.

Marion told the show’s host Nicky Campbell that she had been with Julie’s birth father for just a few months when she discovered she was pregnant, and he disappeared shortly after revealing that he was already married.

Marion’s own parents wouldn’t let her keep the baby and she was sent to a mother and baby unit where young, unmarried mothers were sent to see out their pregnancies and give birth before the children were adopted into other families. 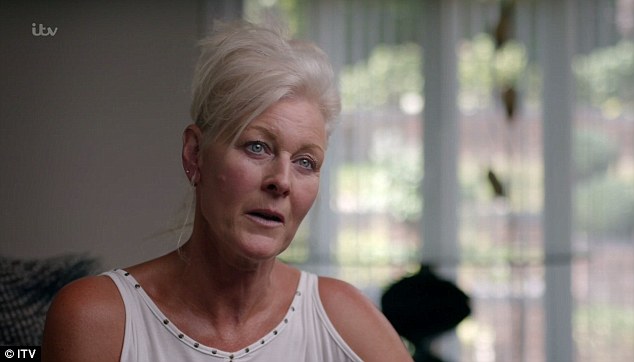 Julie always knew she was adopted and when she was 18 she began searching for her mum, but the search came to a dead end because Marion’s name was too common. Pictured: Julie on Long Lost Family 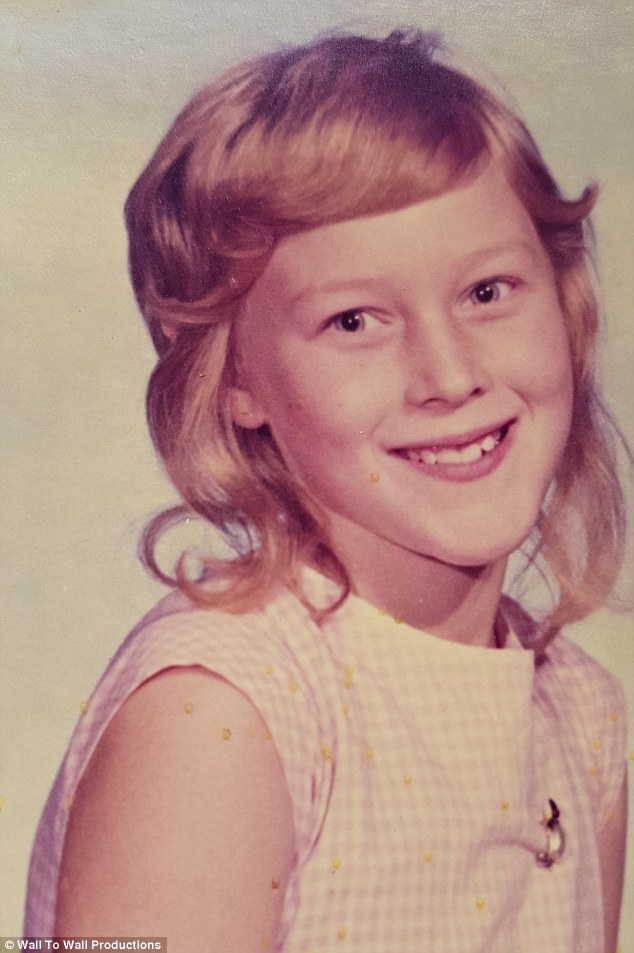 Julie was told that her mother was with her for six weeks before social workers took her away without giving her a choice. Pictured: Julie as a teenager

She recalled: ‘Because I was an unmarried mother I got treated like dirt. There was no sympathy, no compassion.’

Marion was allowed to keep her baby for just six weeks and during that time she used to knit her clothes and pray there was some way they could stay together.

But she revealed the devastating moment when she had to get Julie dressed in smart clothes to meet social workers, who took the baby away without even an apology.

In an heartwarming twist to the story, Marion went on to work in a mother and baby home to make sure other young mums weren’t treated the same way.

She said: ‘You’re a mother, it doesn’t matter how old you are, that’s your child.’

Marion is now married and a grandmother, and always remembered her daughter by marking her name on her birthday in her diary every year. 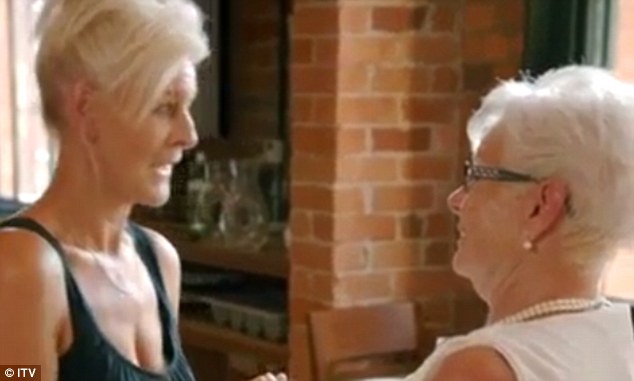 Marion said she felt ‘whole again’ when they reunited, while Julie said ‘the wound had healed’. Pictured: The pair reuniting in Birmingham on ITV’s Long Lost Family

Marion travelled up to Birmingham to meet Julie and the pair shared an emotional embrace as the cameras rolled.

The grandmother said: ‘It’s wonderful to be with her and have her in my arms again. She’s my daughter and she‘s absolutely beautiful. I feel whole again.’

Julie told her she’d had a happy childhood and she’d done the right thing by giving her a better life.

She explained: ‘It’s just lovely knowing Marion’s OK. I just feel that all this pain has been lifted. This wound has healed now.

‘It just feels natural because she hasn’t ever stopped being my mum. You’ve got that bond together, that connection. It’s the start of my life again now.’