Mother shares a viral message to the kindhearted boy who quietly gave his sweater to her daughter after she got her first period on the bus, telling her: ‘I’ve got sisters, it’s all good!’

A mother has penned a heartfelt social media post praising a boy for kindly helping her daughter after she unknowingly got her period on a school bus.

In the message shared on the Facebook page Gurgaon Moms, the US-based woman said the young man came to her daughter’s rescue and saved her from a potentially embarrassing situation.

‘My daughter started her period on the bus ride home today,’ she explained. ‘A boy a year older than her… that she doesn’t really know… pulled her aside and whispered in her ear that she had a stain on the back of her pants.’ 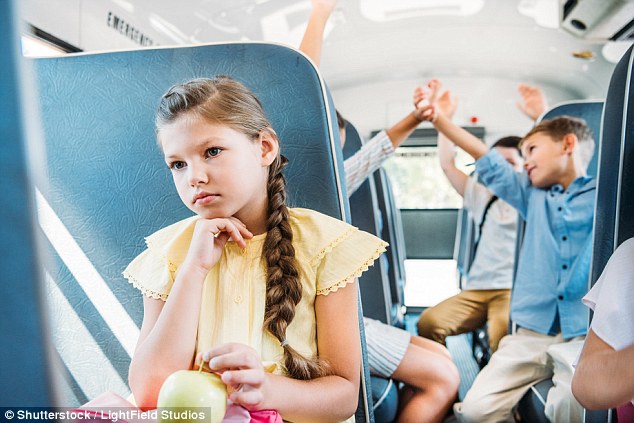 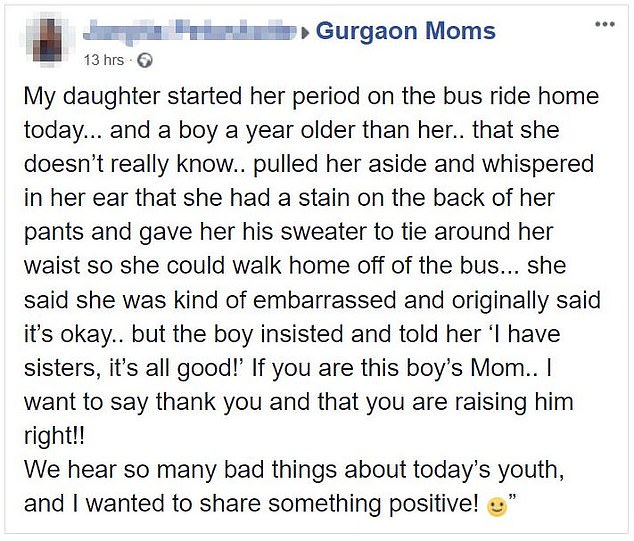 Story: In the Facebook message, she explained that the boy quietly pulled her daughter aside to let her know that she had a blood stain on her pants

The mom said the boy even ‘gave her his sweater to tie around her waist so she could walk home off of the bus.’

‘She said she was kind of embarrassed and originally said it’s okay… but the boy insisted and told her “I have sisters, it’s all good!”‘

The woman went on to thank the unknown boy’s mother for raising such a thoughtful son, adding that his kind act helped her to realize that there are so many compassionate young people out there, despite the ‘bad things’ that are said about today’s youth.

‘If you are this boy’s Mom… I want to say thank you and that you are raising him right!!’ she ended the post.

‘We hear so many bad things about today’s youth, and I wanted to share something positive!’

Although the identity of the young American boy is not known, many people have been praising him online, with one person calling him ‘the hero we deserve.’

‘We need more people like this in the world!’ another commenter wrote.’

Heartwarming: Many people have been praising the boy online, with one person noting the important of teaching young people about their bodies

While someone else noted: ‘This is how we should raise our sons and daughters.’

One person pointed out that it must have been tempting for the boy to make fun of the woman’s daughter, adding: ‘I have a feeling your daughter made a friend for life.’

‘Good on the young man for having the maturity and empathy to offer up a sweater to the girl,’ another person wrote.

Another said: ‘This guy is literally being a bro to this girl. I vote this most appropriate post of the year.’

One posted: ‘That boy will grow up to be a good husband to some lucky girl one day.’

And another said: ‘It’s so amazing to hear some parents are still raising the perfect little gentleman. What a beautiful story. I truly hope my boy turns out just this way.’