Dr James Haberfield is the founder of The Unusual Pet Vets clinics, and star of The Bizarre Pet Vets, which follows he and his colleagues as they treat a variety of strange and exotic animals.

I have a theory that the nicest people in the world are vets. Is that accurate?
Um … I think there’s definitely a pool of people that are quite caring and compassionate. I mean there are nice people in every profession, but I think as a general rule vets and vet nurses, that career path, attracts people who are compassionate and caring, so I think that often translates to, in most cases, them being quite lovely people. So yeah, I think that’s a valid idea. 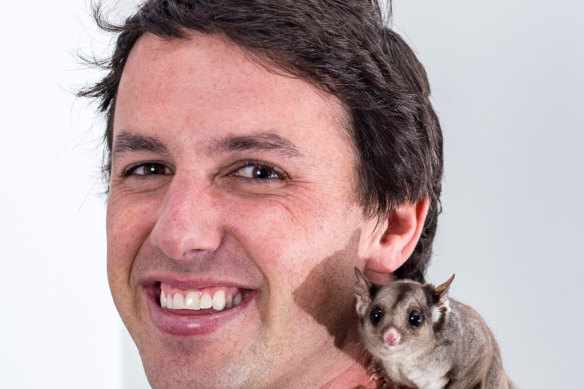 You’re right. Not to badmouth the human doctor profession, but you do get a lot who have quite a poor bedside manner, and in general that’s less common with vets. I don’t know why that is because you’d think they would attract similar type individuals, but it’s interesting.

The other thing – and this is particularly pertinent to you because you’ve chosen to specialise in unusual pets – is a human doctor only needs to know how to treat one species, while a vet needs to know how to treat so many.
In a lot of cases, the human field is very, very niche. You might have a surgeon who does only left knees. Whereas for us, we are a general surgeon, we would do every joint and every organ and whatever you need to do. So the level of detail and experience that they have is probably a bit different, whereas we don’t really have a choice: there’s not really that option in vets.

You can’t refer it on.
Exactly – “I’ll refer this bird’s knee to XYZ because that’s all they do”. It’s one of those things, it’s probably a lack of options that forces you to give it a go – and particularly with the species we work with, because often you’re doing things that haven’t been done very often before.

Have you ever had an animal come to you in your clinic that just made you go, “I have no idea about this one”? An animal that stumped you?
It probably happens more often than you’d think, in terms of some of the really weird things. Like, we had a seahorse in the other day; we had a stingray that we had to do a necropsy on, that had died at home for no reason and we had to investigate why. We have insects brought in: there’s not much known about insects in medicine, and the stuff that is known is often very basic.

How do you examine a seahorse? It has to stay in the water, right?
The good thing is that a lot of the conditions that fish, including seahorses, present with are very obvious – it’s not like they present like, “Oh he’s just a little bit off today.” You examine them visually first, then you get a rundown from the owners about how they’re kept and often that gives some clues to what could be going on. Then from there you’re examining them in the water and if you need to anaesthetise them, you can take them out of water, run the water over where they breathe. So it’s possible, but obviously a bit fiddly.

So just to be entirely clear … you have done surgery on fish?
Yeah. 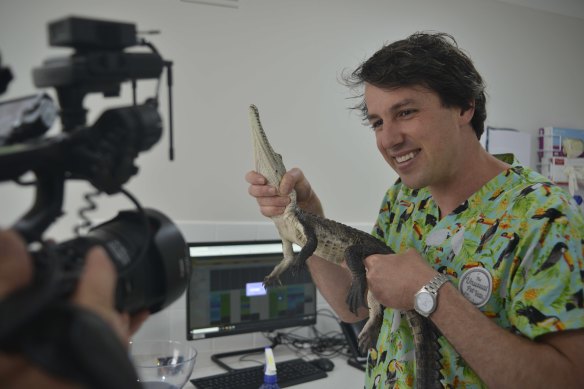 That is so hard for me to even imagine.
A lot of people when I say that will say, “Oh, are they really expensive koi?” – and sometimes they are, but a lot of times they’re just your average goldfish that people love and care for and want to do what they can. I saw a lady on Saturday, she drove for three hours to come and see us, had an oxygenator going through the water tank with the fish in it. We admitted it, did some X-rays. It’s not the expensive fish most of the time, it’s the ones people love and are close to.

Every pet is incredibly valuable to the person who owns it.
A hundred per cent. It’s the same with things like rats and chickens – animals that have limited financial value to buy, but they’re close and they’re part of the family.

Does it make your work harder to have a film crew in the room when you’re working on an animal, getting in your way?
Yeah, there were definitely challenging parts. Particularly when it’s like, “Oh I didn’t quite get that, can you do it again?”

What, like: “Can you open that possum up for us and do it again?”
Yeah, exactly. “We’d just like to get another angle.” It was definitely a learning experience: I was very lucky, the guys and girls we worked with were fantastic and made me feel very comfortable relatively quickly. Things definitely take longer, in terms of the case itself, it takes longer to manage. But the animal still got all the care it needed.

The Bizarre Pet Vets is on Nine Gem, Sunday, 7pm.