Surgeon is hailed ‘genius’ after performing ‘mesmerising’ high-risk operation to remove lung tumour from woman, 30, who was misdiagnosed with Covid after breathing problems

A surgeon has been praised for performing a ‘mesmerising’ high-risk operation to remove a lung tumour from a 30-year-old woman who was misdiagnosed with Covid.

Appearing on BBC2 documentary series Surgeons: At the Edge of Life last night, Dannee, 30, from Cambridge explained that she began struggling to breathe and developed a persistent cough last year.

Six months after her symptoms developed, with doctors initially believing she had Covid, she was diagnosed with a tumour on her right bronchus and underwent surgery at Royal Papworth hospital.

Cardiothoracic surgeon Aman Coonar performed the difficult five-hour surgery, successfully removing the section of bronchus containing the tumour and re-attaching the lung to the airway.

Viewers praised the doctor for performing the ‘mesmerising’ surgery which, if unsuccessful, could have meant Dannee suffered fatal bleeding or lost her lung. 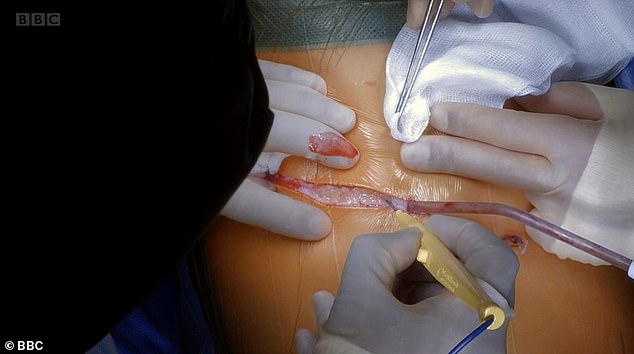 Mr Coonar, who has carried out more than 5,000 operations in his surgery career, had to perform extensive surgery to remove cancer and the damaged section of the lung. He is pictured making the first incision under Dannee’s armpit before attempting to isolate the tumour filled airway away from the structures around it 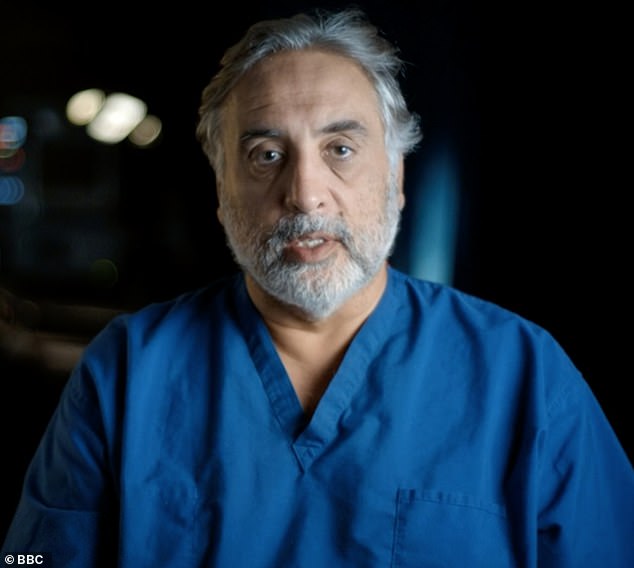 Appearing on BBC2 documentary series Surgeons: At the Edge of Life last night cardiothoracic surgeon Aman Coonar performed a high-risk operation to remove a lung tumour from a 30-year-old woman

Mr Coonar’s patient began developing symptoms in March 2020 and was eventually hospitalised with pleurisy and a double chest infection.

‘It was like a car crash to be honest,’ said Dannee’s long-term partner Delia.

‘One minute it’s one way and the next your whole lives are turned upside down. To have someone so resilient struggle to breathe in front of you is, it’s not easy to see.’

After being misdiagnosed with Covid, Dannee was sent for an X-ray and the next day was told she had cancer and an infection which had damaged to top part of her lung.

Viewers praised the doctor for performing the ‘mesmerising’ surgery which, if unsuccessful, could have meant Dannee suffered fatal torrential bleeding or lost her lung

Mr Coonar, who has carried out more than 5,000 operations in his surgery career, had to perform extensive surgery to remove the cancer and the damaged section of the lung.

The tumour was lodged in her right bronchus, which delivers air into the lung, and had blocked off her right upper lobe, causing infection.

The surgeon had to perform a sleeve resection, meaning he had to remove the tumour and the damaged upper lobe before carefully re-attaching the lung to the airway.

If he was unsuccessful in re-attaching the lung to the airway then he would have had to perform a pneumonectomy, removing Dannee’s entire lung. 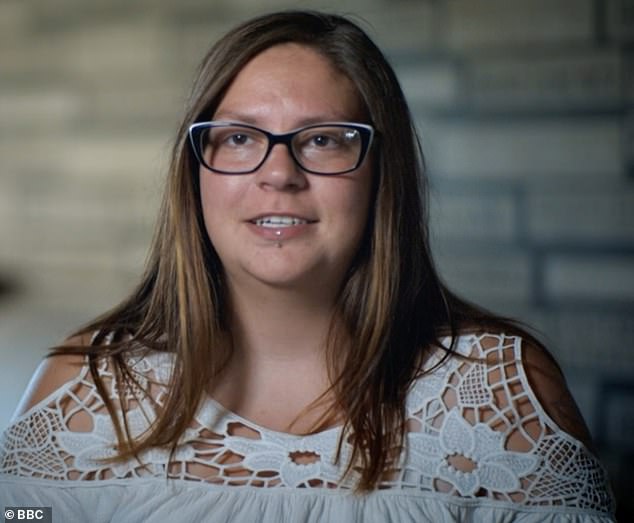 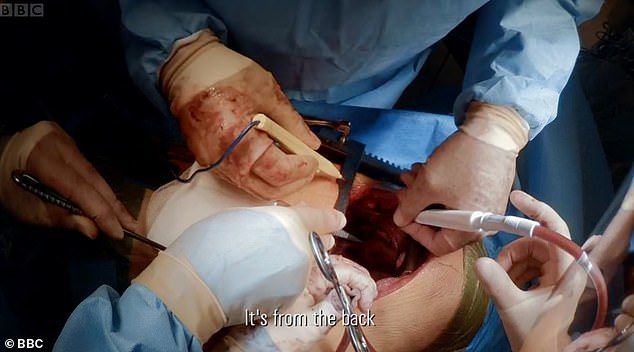 During the surgery, Dannee experienced some bleeding around the origin of the pulmonary artery, where a rupture could prove fatal 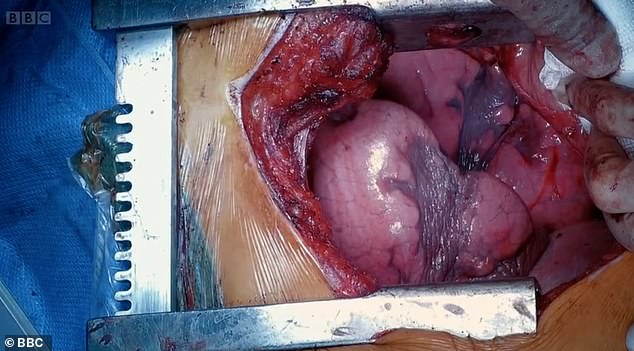 The surgeon was able to successfully re-attach the lung to the wind pipe, saying: ‘When the lung suddenly moves and becomes pink and you can see the air going back into it is a lovely moment’

‘If this isn’t treated it can make her very, very sick and it can kill her’, said Mr Coonar.

LUNG CANCER: HOW COMMON IS IT AND IS IT FATAL?

Lung cancer is one of the most common and serious types of cancer.

Around 47,000 people are diagnosed with the condition every year in the UK.

There are usually no signs or symptoms in the early stages of lung cancer, but many people with the condition eventually develop symptoms including:

– an ache or pain when breathing or coughing

You should see a GP if you have these symptoms.

There are two main forms of primary lung cancer.

These are classified by the type of cells in which the cancer starts growing.

– Non-small-cell lung cancer. The most common form, accounting for more than 87 per cent of cases.

– The type of lung cancer you have determines which treatments are recommended.

More than four out of 10 people diagnosed with lung cancer in the UK are aged 75 and older.

Although people who have never smoked can develop lung cancer, smoking is the most common cause (accounting for about 72 per cent of cases).

This is because smoking involves regularly inhaling a number of different toxic substances.

Treatment depends on the type of mutation the cancer has, how far it’s spread and how good your general health is.

If the condition is diagnosed early and the cancerous cells are confined to a small area, surgery to remove the affected area of lung may be recommended.

If surgery is unsuitable due to your general health, radiotherapy to destroy the cancerous cells may be recommended instead.

If the cancer has spread too far for surgery or radiotherapy to be effective, chemotherapy is usually used.

There are also a number of medicines known as targeted therapies.

They target a specific change in or around the cancer cells that is helping them to grow.

Targeted therapies cannot cure lung cancer but they can slow its spread.

Mr Coonar made the first incision under Dannee’s armpit before attempting to  isolate the tumour filled airway away from the structures around it.

He used an endoscope camera to look inside the chest cavity and discovered scar tissue caused by repeated infection which had stuck the bronchus to the blood vessels and tissue around it.

‘When it gets to the nitty gritty of separating out the important bits things can be very stuck’, he said. ‘It’s very easy to go into the wrong bit all for something to rupture’.

During the surgery, Dannee experienced some bleeding around the origin of the pulmonary artery, where a rupture could prove fatal.

‘We could have terrible bleeding, catastrophic bleeding from the pulmonary artery, wise words from older surgeons were pause, regroup and go back to doing what you know you can do’, he said.

‘I’ve done thousands of operations now and I have say this is one of the most challenging i’ve had to do, everything is so stuck together things could easily go wrong’.

‘I try not to think about failure, i’m having to keep myself steady’.

After successfully locating and stopping the bleed, Mr Coonar had to cut away the tumour filled bronchus without causing any more bleeding.

Meanwhile, Dannee’s partner was waiting at home while her girlfriend underwent surgery due to Covid restrictions.

‘I don’t like to think about saying goodbye, she said. ‘I want to be there every moment.

‘Dannee and I have had that conversation, in the event of worst case scenario. It wasn’t easy to have to bring that up, honestly i’m petrified’.

After removing the tumour and upper lobe of lung, the tissue sample was sent to pathology to for testing to see if the surgeon had successfully removed the area where the tumour was.

‘There’s no sense of relief’, he said. ‘Because the next really important part of the operation begins and I have to move forward decisively and swiftly. I have to put these things back together again and it has to be done smartly’.

For Dannee’s lung to work, the surgeon had to sew the two sections of her airway together.

However as he pulled the two ends of the airway together, her pulmonary artery tore and started to bleed again.

‘The pulmonary artery is just too much in the way and it’s very likely if I do what I planned I’ll end up damaging the pulmonary artery or kinking the airway so air doesn’t go in and out of it properly which would just be a disaster’, said Mr Coonar.

‘No surgeon likes to be in that moment. I’m really quite cross with myself. I cannot see where to put the next stitch, I have no choice, I have to take control of this.’

However the surgeon was able to successfully re-attach the lung to the wind pipe, saying: ‘When the lung suddenly moves and becomes pink and you can see the air going back into it is a lovely moment’.

Four days after the operation, Dannee was allowed home and while in hospital for her final post-operation check up reflected on her surgery, saying she has a ‘second chance at life’.

‘Someone said to me “What are you doing now you’ve been given a second chance”, she said.

‘That almost was like wow I didn’t see it as a second chance, so I think i’ll live everyday as it comes now to the fullest’.

Mr Coonar added: ‘Now she’s going to have a normal life, she’s lost no working lung the infection is gone and the healing looks great, all the tumour is out i’m really pleased’.

Viewers were awe-struck by the surgery, with one writing: ‘Aman Coonar you are an absolute genius. Wow.’

‘I cry every time I watch #surgeonsattheedgeoflife. In absolute awe of these incredible humans’, said another.

A third commented: ‘Genuinely can’t get over how talented, skilled & calm these people are during the scariest of operations.’

Surgeons: At the Edge of Life is available on BBCiPlayer