Student, 21, who had part of her skull removed to save her life after being thrown off her horse is learning to walk and talk again – but her mother admits she’s grieving for her daughter who’s ‘not the same’

A student who survived a catastrophic horse riding accident and had part of her skull removed, is slowly re-learning to walk and talk again, but her mother admits she’s ‘grieving’ for her daughter who is ‘not the same person’.

Alisha Hopkins, 21, from Somerset, was out horse riding with friends in March, 2021, when the horse was spooked and she was flung to the ground.

The veterinary student suffered a severe head injury, she was rushed by air ambulance to a hospital in Bristol and taken straight into theatre where surgeons had to remove part of her skull due to fluid build-up.

Now, 13 months on, Alisha has defied the odds and is now re-learning to walk and talk again. 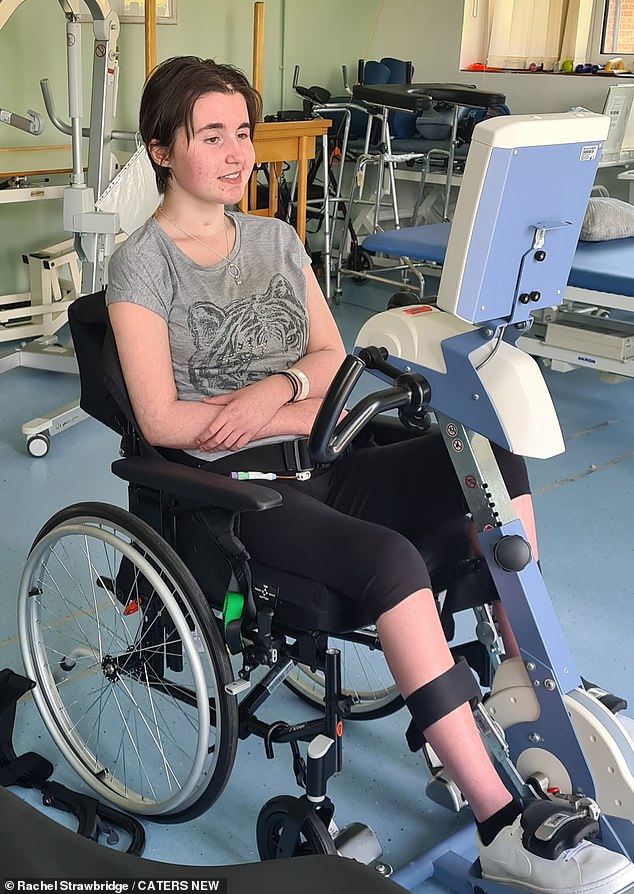 Alisha Hopkins, 21, from Somerset, was out horse riding with friends in March, 2021, when she was flung from the horse and was rushed by air ambulance to a hospital in Bristol 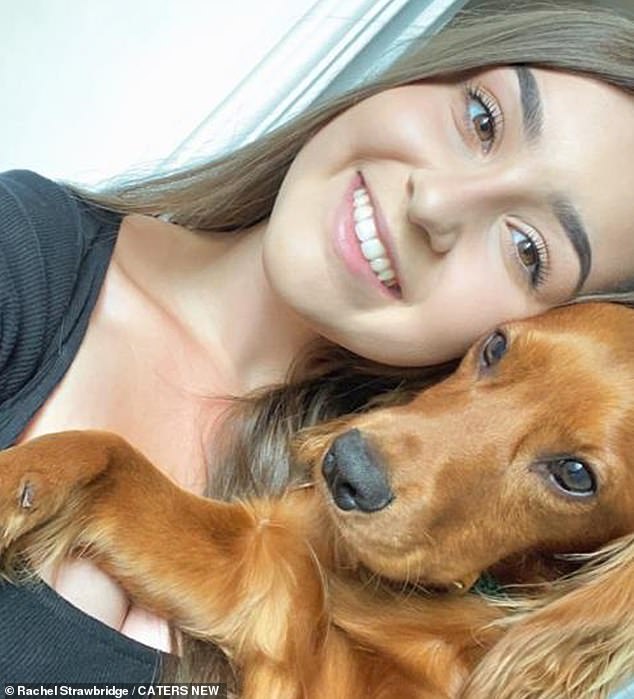 Her mother, Rachel Strawbridge, 44, said: ‘She is so strong. She’s not the same Alisha we had before. We’re grieving her, but I am so grateful she is still here.’

When Rachel received that devastating phone call to tell her Alisha had been in an accident she had no idea the severity of the situation.

The NHS clinical support worker said: ‘When I turned up there were two ambulances and three police cars already there. They flew her to hospital and I drove, but by the time I arrived she was in surgery. They operated on her for around three hours.

‘They told me it went well but they weren’t sure if she was going to survive. It was unclear just how serious Alisha’s injuries really were.’

During surgery Alisha had to have part of her skull removed – known as a craniectomy – due to the pressure building in her brain.

She added: ‘Because she had part of her skull removed, they replaced it with with a 3D titanium plate and a shunt. 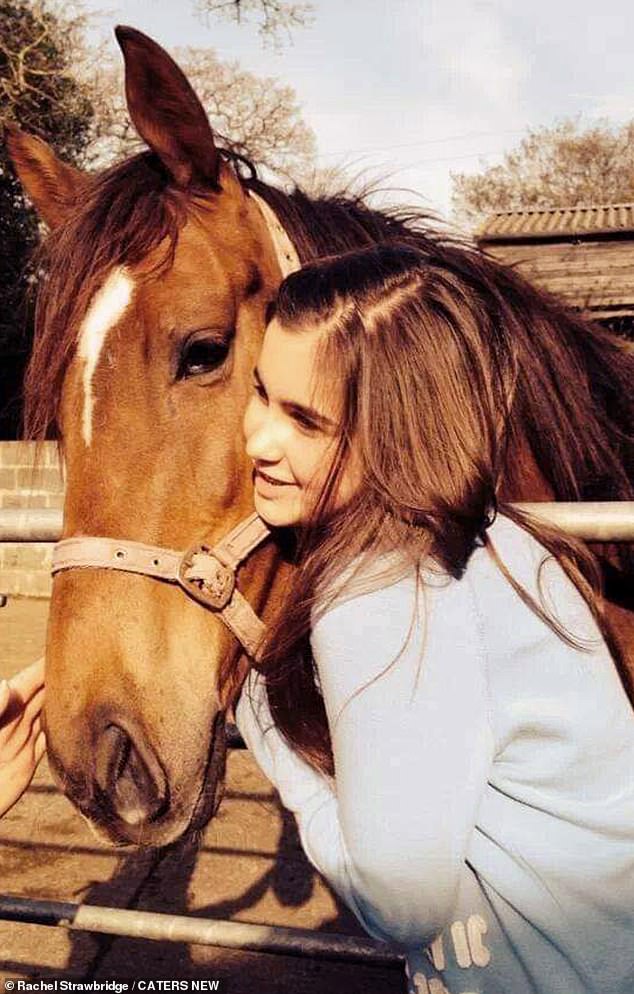 Alisha hugging a horse when she was younger. Her mum Rachel says she’s so thankful her daughter is still alive but the family have had to ‘grieve the old Alisha’ 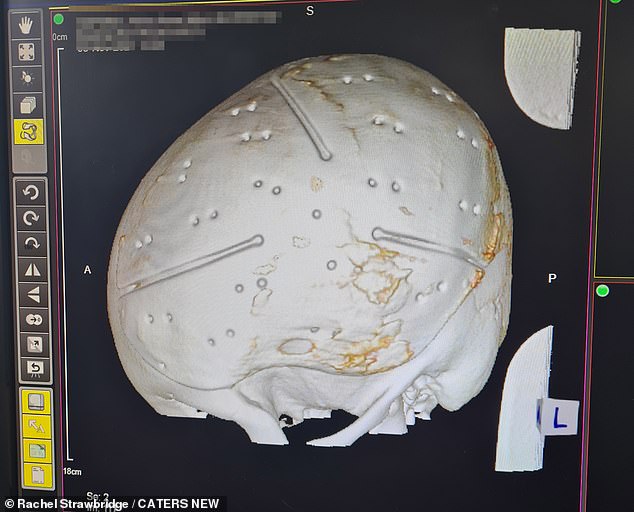 ‘The shunt is like a little device, attached to the side of the skull underneath the skin on the side of Alisha’s head.

‘Brain fluid naturally disperses into your body, but her body can’t do that anymore so the shunt regulates the amount of fluid that goes from the brain to the abdominal area via a tube.

‘She was in a coma, but we spent the whole day with her. 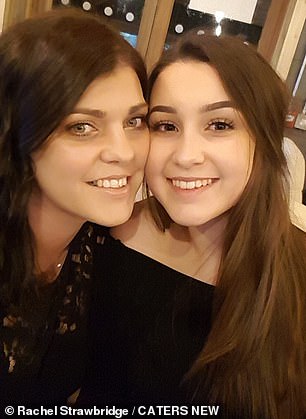 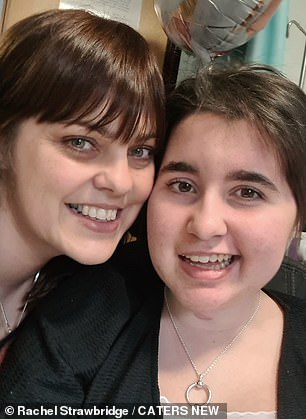 ‘Her brain damage extent was unknown at that point, but all we knew was that she had frontal and temporal damage. Her brain ultimately did a whiplash in the skull which caused the traumatic injury.

Doctors were amazing by Alisha’s recovery and 12 month later she has exceeded everyone’s expectations.

Rachel added: ‘The brain is such a fragile organ, her consultant has said she exceeded his expectations one year in.

‘She is showing how much of a fighter she really is. She is still here, we’re just embracing the new Alisha we have now.’ 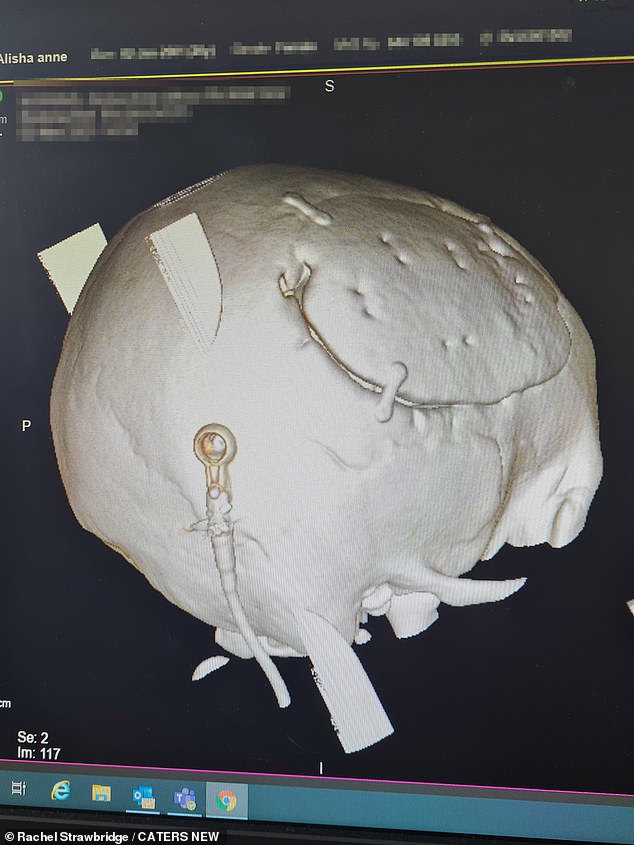 The shunt attached to Alisha’s skull. Rachel said: ‘The shunt is like a little device, attached to the side of the skull underneath the skin on the side of Alisha’s head. Brain fluid naturally disperses into your body, but her body can’t do that anymore so the shunt regulates the amount of fluid that goes from the brain to the abdominal area via a tube’

Alisha is currently in rehab and is re-learning how to speak and move again and Rachel has been by her side every day.

Rachel is now raising money on GoFundMe to be able to fund a life-changing housing extension, which would mean Alisha could finally go home and get the care she needs from the comfort of her own home.

Rachel, who has another son Matthew, explains: ‘I show her pictures to see if she can recognise things, and also to try and get her to communicate what she wants.

‘She will talk and nod, she also noticed that her friend was pregnant, she smiled and pointed at her belly.

‘We’re just not sure if she is aware of what has happened to her. She will respond if you ask her to. She can say a few words and nod but that’s about it. 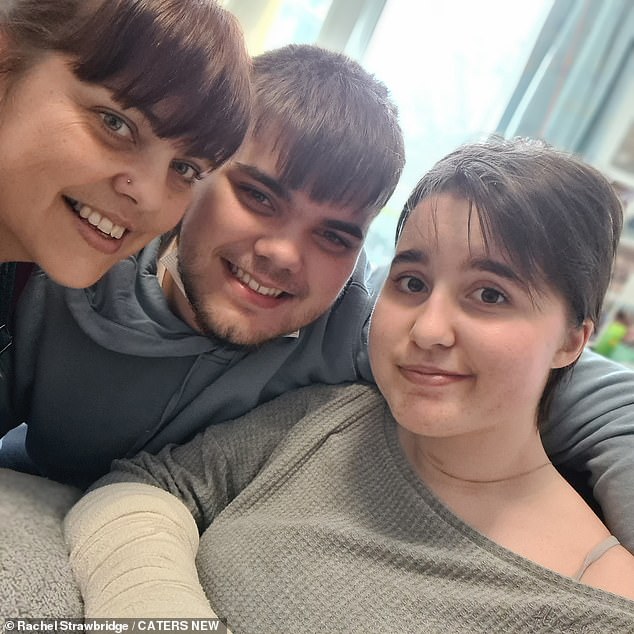 Mum Rachel (L) with her son Matthew, and daughter Alisha (R) today, she says she can’t wait to have Alisha home 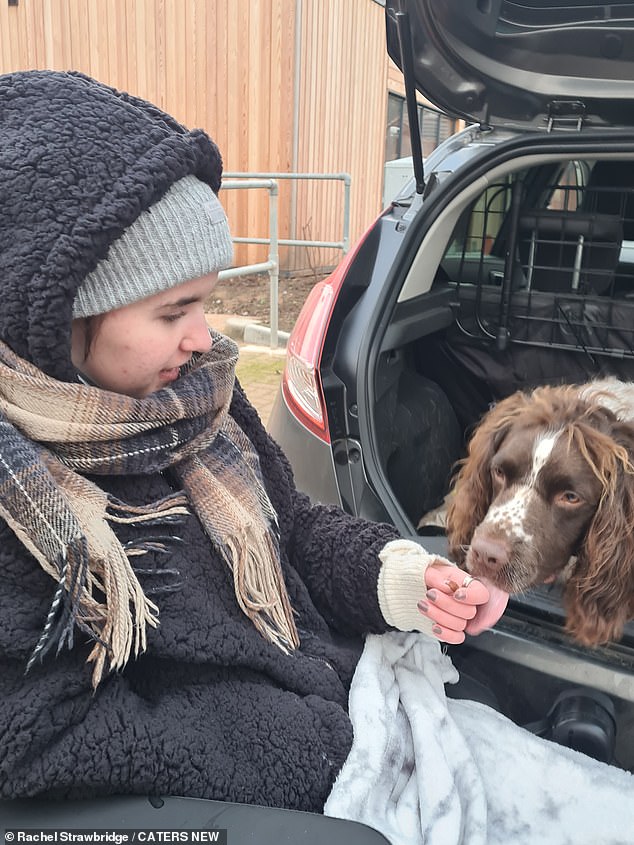 Alisha today in her wheelchair, having a special moment with a loving dog. Alisha now needs regular rehab to build her strength to be able to walk independently again

The damage to the left side of Alisha’s brain means the right side of the body is damaged.

‘She can move her left side but she is currently hoisted up because she can’t walk,’ Rachel added. ‘The extension would mean we can have Alisha home, and we’re hoping for her to be home by Christmas this year.

Due to the severity of Alisha’s injuries the family will be granted £30,000 for the home extension from the council.

Rachel said: ‘And architect has said it’ll be nearer £50,000 because the price of materials has gone up and Alisha will also need specialist equipment specifically for her and her complex needs.

‘The GoFundMe has been amazing, and also so many people from our community have helped to fundraise for us too.

‘Just one step at a time and we must wait until she’s home. It’s just about her recovery, I know she won’t give up.

‘I can’t thank the NHS enough, they are miracle workers. I call her surgeon a god, he has saved my daughter’s life.’