Time was you couldn't go to a student party without some wit regurgitating slabs of Monty Python. 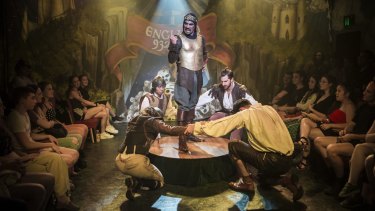 The Hayes Theatre has been reconfigured to leave a tiny performance space.Credit:John McRae

Such was the appeal and originality of the British comedy team, whose surreal sketches were to the 1970s what The Goons were to an earlier generation.

This high-energy, inventive production has brought something of the absurdist, anarchic spirit of Python to what is an extremely silly and light-as-air show.

The musical is described as "lovingly ripped off" from the 1975 motion picture Monty Python and the Holy Grail. It is a description only part tongue-in-cheek.

Created in 2005 by Eric Idle, one of the original Pythons, he did so long after the original troupe – that included John Cleese and Michael Palin – were in their heyday.

The musical repackages some of that movie's best-loved sketches. There's the plague victim ("I'm not dead yet"), the legless knight ("It's just a flesh wound") and the flatulent French soldier ("Your mother was a hamster and your father smelt of elderberries").

And it plonks in the song Always Look on the Bright Side from the later Python movie Life of Brian (minus the crucifixion). There's a retro pleasure in revisiting them – akin to seeing a tribute band.

To the movie's feudal frolic of King Arthur and his quest for the Holy Grail is added another – to create a Broadway musical. The send-ups of the musical form and its choreographic clichés rescues the piece from simply re-frying old spam.

The Hayes Theatre has been reconfigured leaving a tiny central space in which to joust and jest. The production frequently breaks the fourth wall just as Terry Gilliam's original animations once burst across the screen.

Cramer Cain is a delightfully deadpan King Arthur, all firm jaw and pumped-up chest, and makes his self-pitying wallow I'm All Alone (joined by the cast) particularly effective.

Josie Lane's Lady of the Lake diva raises the roof, sending up Andrew Lloyd Webber's musicals and power ballads. Her arrival, like Cher in a shopping trolley, was a masterstroke that satirised both Turn Back Time and Phantom of the Opera.

The production makes a virtue of its low budget, with its painted backdrops (design Emma Vine) and a fabulous faux fur coat of so many stuffed toy koalas that Paddy's Market must surely have been denuded.

With some local references and to recent pop culture, you don't have to be a Python aficionado to get the piece.

Director Richard Carroll and his exuberant cast have served up a comic treat from Idle's largely reheated ingredients. You might laugh. A lot.