The month of March is known for its extremely volatile weather, as warm spring conditions battle to replace the cold of winter. When and where the collision between the two meet, severe weather and tornadoes are bound to emerge.

This common March collision is on track to take place from Tuesday through Thursday in the southern U.S., with a particularly dangerous severe weather outbreak likely Wednesday and Wednesday night from Arkansas east to Alabama. There’s a threat of numerous tornadoes, with a few large and powerful tornadoes possible.

Wednesday morning, NOAA’s Storm Prediction Center issued a “high risk” warning — 5 out of 5 on the warning scale. It said “long-track, intense tornadoes are expected along with damaging winds and large hail” are expected to begin this afternoon across parts of Louisiana and Arkansas, moving eastward by evening into Mississippi and Alabama.

A significant tornado outbreak is expected to begin this afternoon across parts of #LA & #AR, and then spread eastward and peak this evening/tonight across #MS & #AL. Long-track, intense tornadoes are expected along with damaging winds and large hail. pic.twitter.com/KLVJtzudEh

There hasn’t been a “high risk” warning in March since 2012. This is just about as dangerous as it gets, with widespread, destructive and potentially deadly tornadoes likely.

For forecasters it is no surprise that that spring severe weather season is starting with a bang. That’s because there’s still a formidable La Niña event present in the tropical Pacific Ocean, which is typically associated with a more extreme, wavy jet stream and thus a heightened tornado threat.

Also, tornadoes are becoming more common in March. This past weekend, as historic snowfall plastered Denver and Cheyenne, the same storm spun up 19 tornadoes in the Texas Panhandle. In a 2015 paper, researchers found that the onset of tornado season has moved up 13 days since the late 1970s.

And the tornado threat is not just shifting in time, it is also shifting location. A 2018 study found that there is a decreasing trend of tornadoes in what is traditionally known as Tornado Alley in the Plains states, but an increasing trend of tornadoes occurring across the Mid-South — the same general area which is expected to face this week’s severe weather outbreak.

The danger may already be increasing in this region. Two of the most deadly tornado outbreaks in the past two years occurred in early March in the Southeast. In 2019, 41 tornadoes concentrated in Alabama and Georgia killed 23 people. In 2020, there were 25 fatalities as 15 tornadoes tore across Tennessee.

Typically these spinning storms lift northeast in the Mississippi Valley area, but this storm cannot because of an atmospheric block to its north. Instead it will continue to head eastward Wednesday and Thursday, bringing with it strong dynamics all across the Southeast, which brings the threat of a widespread outbreak and particularly dangerous situation.

What concerns me the most here is that the bowling ball never lifts. It’s can’t because of blocking to it’s north. So dynamics spread over a much larger area with unstable air. https://t.co/cQeDHYjYpA

The main event will occur as the cold-spinning storm slides east, colliding with warm-moist air spilling out of the Gulf of Mexico.

Outside of the “high risk” bullseye, the Storm Prediction Center has highlighted a wide area for an “enhanced risk” of severe weather — a 3 out of 5 — from extreme southern Missouri southeastward into the Florida Panhandle. 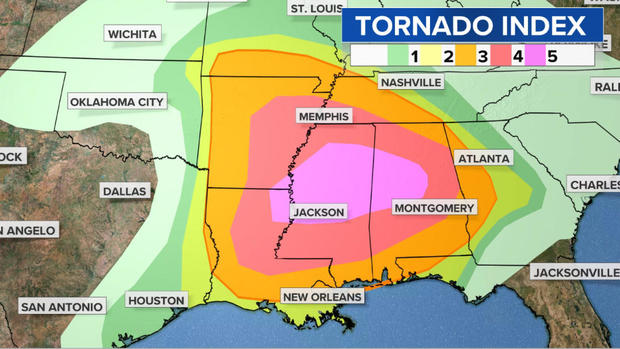 Buried inside that wider enhanced area is an even greater risk, seen in red on the map. This is technically called a “moderate risk,” and it is an abnormally large risk area — but the name is misleading. A moderate risk is a 4 out of 5 on the severe weather scale and indicates the potential for very dangerous severe storms. This includes cities like Little Rock, Memphis, Tupelo and Birmingham.

If you live in any of these risk regions, pay close attention to local warnings and remember storms will become even more dangerous as night falls and the tornadoes become harder to see. Computer models do indicate that the threat for large tornadoes will be maximized Wednesday evening and night. 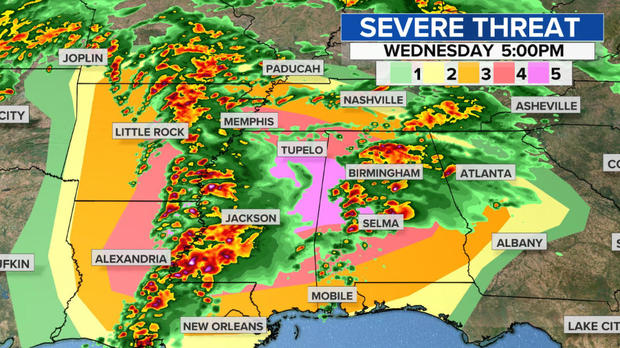 Nighttime tornadoes are more common in the Mid-South. That’s because, unlike the drier Plains states which rely on the warmth of daylight to provide energy for thunderstorms, the region adjacent to the Gulf of Mexico, due to extra humidity, can maintain a more energetic and unstable atmosphere much later into the night.

The severe outbreak tomorrow will likely last through the night into Thursday. Here are the states that see the most nocturnal #tornadoes vs. the risk area tomorrow/tomorrow night. https://t.co/5CAHsVdh98 pic.twitter.com/AACRHnMltO

The threat for severe weather will persist into Thursday as the system shifts into Georgia and the Carolinas, where once again tornadoes, damaging winds, hail and lightning will all be likely. 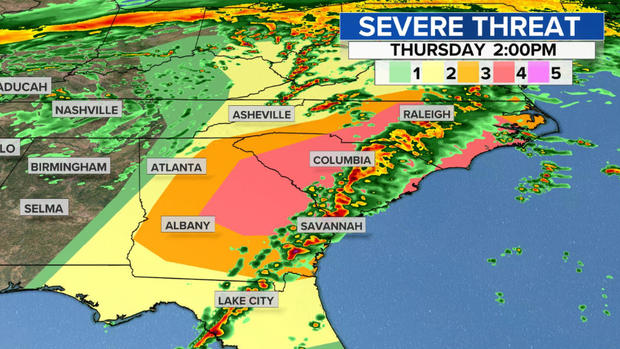 There are a variety of reasons why tornadoes are more dangerous and destructive in the Southeast, besides the greater tendency for them to happen at night. This greater vulnerability is why trends in more and stronger severe storms in this region are concerning.

Because these storms form in a moister environment, they tend to be wrapped in rain and harder to see. In addition, unlike the Plains states, where the terrain is often wide open, allowing people to spot tornadoes from miles away, the Southeast is covered with more hills and trees.

The region also has a higher population density and many weaker frame homes, increasing the danger of damage and death. Research finds this danger will continue to grow as building continues to expand and tornado distribution changes, with a possible threefold increase in disaster potential by the end of the century.

While scientists are still trying to figure out why tornado patterns are changing, there is plenty of research that shows dangerous storms, and the environments the form in, are on the increase, at least partly due to human-caused climate change.

A 2016 study showed that, since the 1960s, the frequency of tornado outbreaks is increasing and the most extreme of these outbreaks are increasing at the fastest rate. And it is outbreaks, as opposed to individual tornadoes, that tend to be the most destructive, with 79% of tornado fatalities from 1972 to 2010 occurring in outbreaks.

Probably the most revealing paper on tornado trends was published in 2018 by Dr. Victor Gensini and Dr. Harold Brooks. Their research shows a clear increasing trend in tornadoes in the Mid-South and lower Mississippi Valley — an area that, as mentioned above, is particularly vulnerable. The greatest increase is near cities like Little Rock, Arkansas; Memphis, Tennessee; Tupelo, Mississippi and Tuscaloosa, Alabama. That matches the greatest threat area on Wednesday.

CBS News spoke with Gensini, an extreme weather researcher from Northern Illinois University (NIU). He says his research shows that in the Mid-South, a local area the size of a city can expect to experience an average of 4 extra tornadoes per decade than it did just 40 years ago.

In the image below, taken from Gensini’s paper and adapted by NIU, the red shaded area indicates where tornadoes are on the increase — almost precisely ground zero for this Wednesday’s expected outbreak. 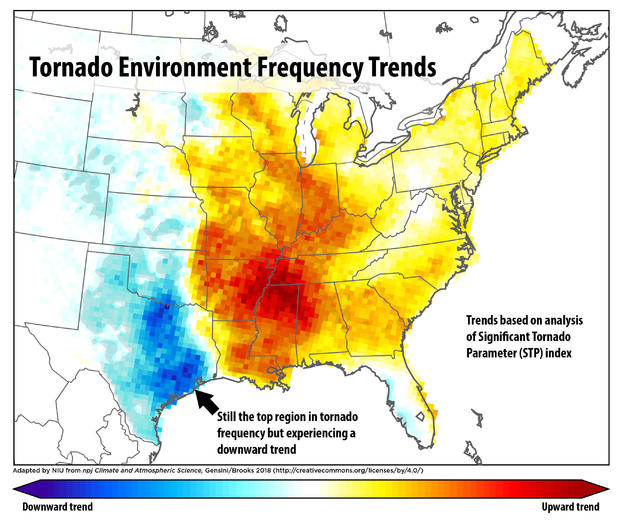 In the blue shaded area, tornado numbers are decreasing in Texas and into the lower Plains. While that area — commonly referred to as Tornado Alley — still has the highest density of tornadoes, the increasing trend is weighted to its east.

Although Gensini can’t say for certain why the eastward trend is occurring, he says this is consistent with what we would expect from climate change. That’s because as the climate warms, the dry desert regions of the Southwest are expanding eastward. This limits the instability over the Plains states, and therefore also tornado formation, and it pushes the convergence zone between dry and moist air eastward.

In addition, the Gulf of Mexico waters and adjacent land areas are warming up due to man-made climate change. This influx of more warmth and moisture provides increased energy to power more extreme tornado outbreaks in the Southeast.

And as humans continue to warm the climate, most of the science agrees that the environment which creates these dangerous tornadoes will continue to become more unstable and dangerous.