Sky News presenter Jacquie Beltrao, who has stage 4 breast cancer, gets her first tattoo at 56 to mark Olympic success 37 years ago – saying she was ‘inspired’ by Tom Daley’s body art

Sky News sports presenter Jacquie Beltrao has revealed she’s had some ‘Olympic ink’ to mark her own gymnastic achievements 37 years ago.

Beltrao, 56, who is undergoing treatment for breast cancer, took part in the 1984 Los Angeles Olympic Games in rhythmic gymnastics when she was 19, and was British Champion.

Inspired by Tom Daley and Simone Biles in Tokyo, who both have the Olympic rings tattooed on their skin, the mother-of-three decided to get similar body art on her shoulder to mark her own sporting achievements.

The sports presenter was diagnosed with breast cancer in 2013 and saw the disease return in 2020 as a grade 4 cancer. She’s currently undergoing treatment and regularly updates her 84,000 followers on Twitter.

Sharing a video of herself having the artwork, she wrote: ‘It barely hurt at all!’ 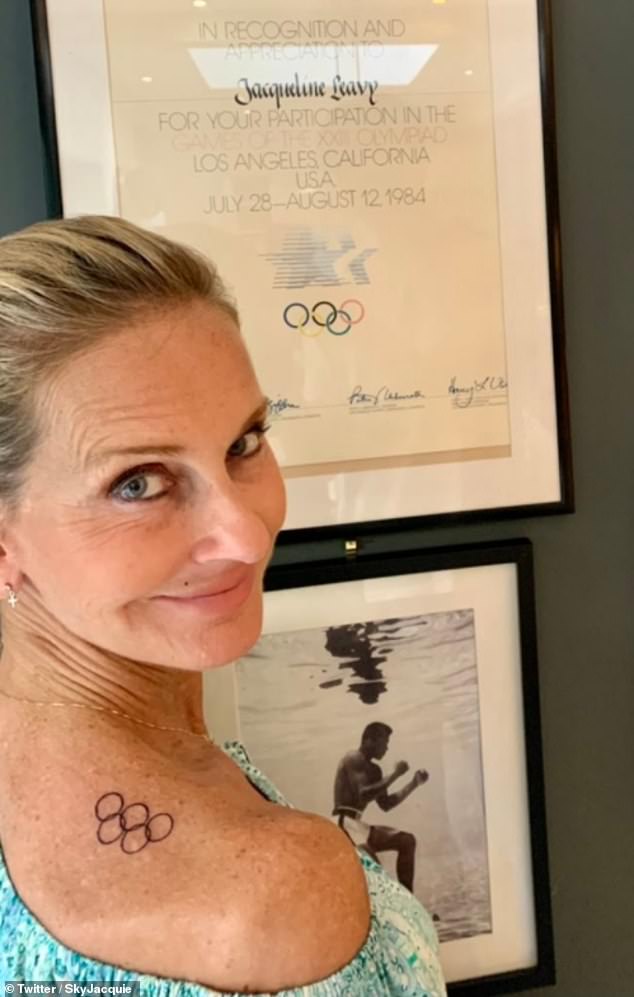 Proud: Sky News sports presenter Jacquie Beltrao, 56, has revealed she got an Olympic tattoo to mark her participation in the 1984 Los Angeles Olympics

The former athlete shared the news with her fans on Twitter, joking she didn’t want to act her age

Beltrao had previously told followers: ‘Well Tom Daley has one, Simone Biles has one so inspired by Tokyo 2020, I got some Olympic ink of my own – just 37 years after LA ’84! What can I say I was feeling rebellious.’

The sports broadcaster completed the message with a hashtag reading ‘Once an Olympian always an Olympian’ and tagged in Team GB.

Jacquie was known as Jacqueline Leavay when she competed at the age of 19 in the all round competition, coming in 31st place. It was the first year the discipline was introduced at the Olympics.

Tom Daley, who struck gold at the Tokyo 2020 Olympics this year in the men’s synchronized 10-metre platform and became the first British diver to win four Olympic medals, got his Olympic tattoo in 2012 when he won the bronze medal in the 10m men’s platform event.

After bringing home five Olympic medals in one go, including four gold and one bronze, the athlete celebrated by getting the five Olympic rings tattooed on her elbow in black ink in 2017. 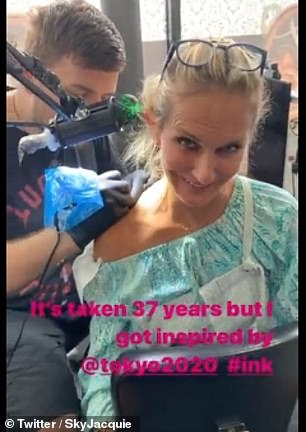 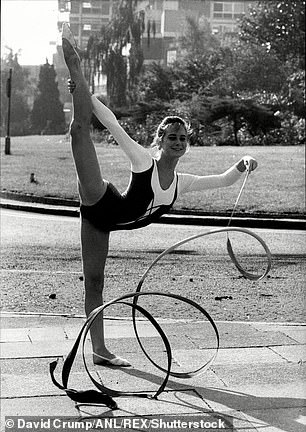 Some 67,000 people on Twitter have viewed the video of Beltrao going under the tattooist’s needle. Right: Aged 19, Jacquie, then known as Jacqueline Leavy, and was the National Overall British Champion in Rhythmic Gymnastics 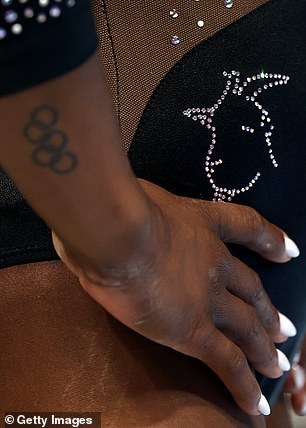 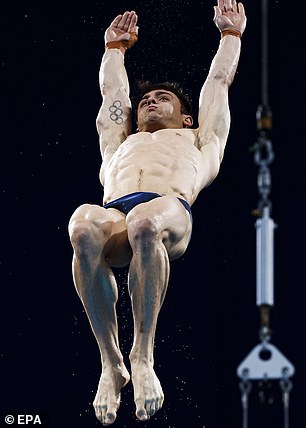 A close-up of Simone Biles showing her Olympic tattoo, which she got in 2017, a year after winning four gold medals during the Rio Olympics. Right: Tom Daley, pictured, got the Olympic rings tattooed on his bicep after taking part in the 2012 Olympic Games in London (pictured at the Tokyo Olympics)

Earlier this year, the Sky sports presenter said she felt ‘unbelievable’ after being told that there was ‘no evidence’ of her cancer following a scan.

Jacquie said at the time: ‘I’m living proof anything is possible’. She revealed in June 2020 that she was facing a second battle with breast cancer after doctors first told her she had the disease in 2013.

The former Olympic gymnast told The Sun at the time: ‘It was almost a year ago that my cancer had returned and that it was worse than ever.

‘I had feared the worst and had times when I’d hear a piece of music and think, ‘That’ll be good for my funeral’.

‘There were dark days, so to be told there is no evidence of cancer now is unbelievable.

‘I was expecting bad news or, at best, that my aggressive cancer hadn’t got worse. But to be told there is no evidence of it now is beyond my wildest dreams.’ 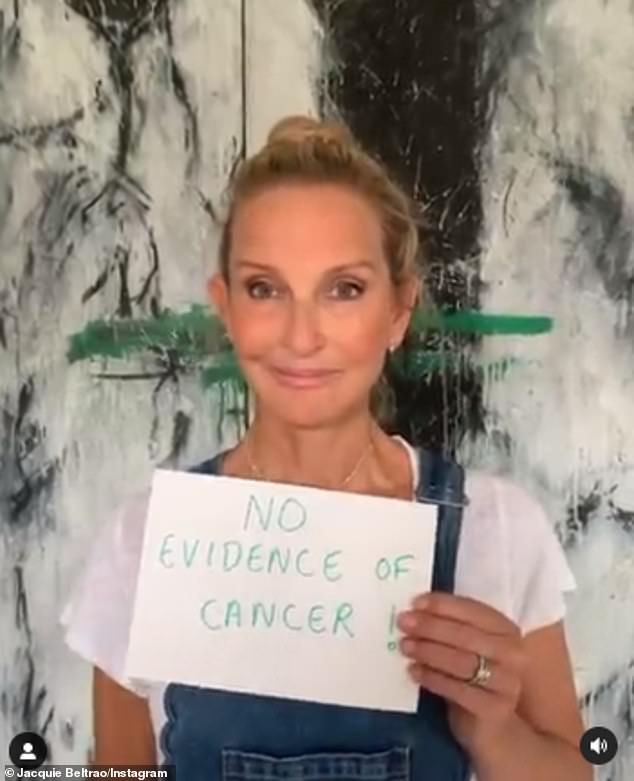 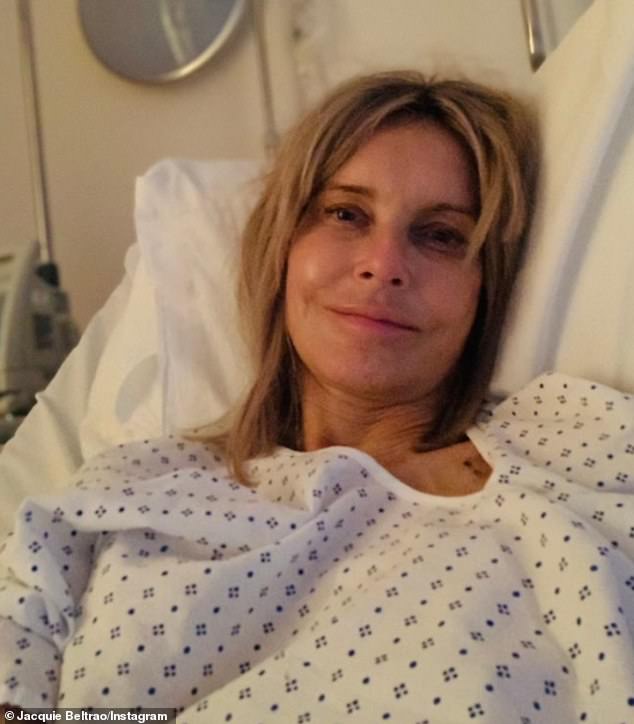 Tough: Jacquie revealed in June 2020 that she was facing a second battle with breast cancer after doctors first told her she had the disease in 2013

She added that she had thought she had only had two years left to live but now she can ‘enjoy life again’, before adding that she is ‘living proof that anything is possible’.

Jacquie also called on others to be vigilant about potential cancer symptoms and not to delay seeing a doctor.

Last Saturday she celebrated receiving a clear scan on Saturday amid her stage 4 breast cancer battle.

Taking to Instagram she posted a heartwarming video where she exclaimed: ‘I know it’s not forever but I’m going to take it for now. A bit of good news at last and I’m so happy!’

Writing a lengthy statement alongside the video, the presenter penned: ‘I’m not cured – make no mistake – there is no cure for Stage 4 cancer but for now the scan is clear. It’s the best I can hope for. For now ……and I’m so so so grateful.’

The presenter explained: ‘So I’ve got some breaking news… scans are in and…’ she then dropped the card to reveal another one which said: ‘No evidence of cancer!’

Jacquie continued: ‘I can’t believe it, I just can’t believe it. I know it’s not forever but I am going to take it for now. A bit of good news at last and I’m so happy!’ 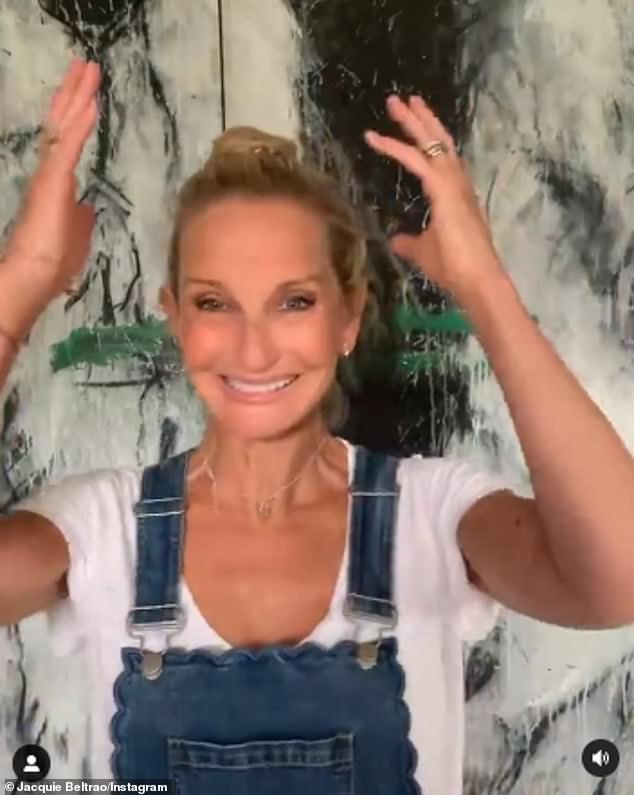 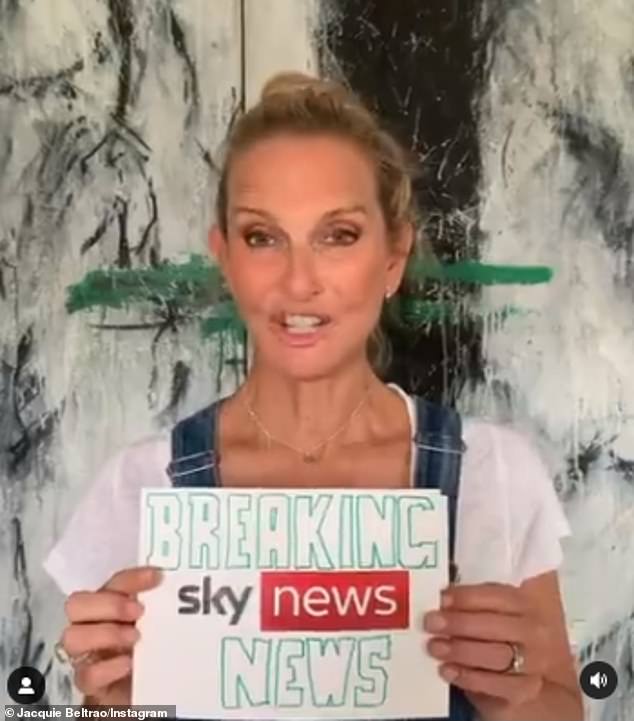 Yay!: Taking to Instagram she posted a heartwarming video where she exclaimed: ‘I know it’s not forever but I’m going to take it for now. A bit of good news at last and I’m so happy!’

The presenter penned alongside the video: ‘#Breaking scans are in and ….. FINALLY a bit of good news – progress – amazing b****y progress.

‘So very grateful to my oncologist Muireann, my surgeon Mr Sharma, my guardians and guides @joannapeixoto @julialeckeyauthor @elenhughes9 Annette Burns in Ireland @louisa.breathebalancebe.

‘@how_to_starve_cancer @nicole_hill65 for all the encouragement @trishlighthouse108 for light & love & her singing bowl @millbrae123 for all the Shabbat Shalom every Friday.

‘ALL my friends and colleagues and to my amazing, strong beautiful family @mreduardob @ameliaabeltrao @tiagoobeltrao @jorgebeltrao_ & the magical dogs plus my sisters Susu & Lorraine who are never far away.’

acquie continued: ‘I know this isn’t permanent things could have changed again by my next scan, that the drugs stop working or whatever but…. for now in the here and now this is the best I could hope for.

‘I lost my beloved Mother-in-law Anna yesterday – it was a horrible day. This news, my scan news, came two hours later and helped us all. Anna would have been so happy and relieved.

‘I’m sure she is still and is raising a glass in heaven as we speak, I would have loved to have shared this news with her. But I’m sharing it with you all because I’ve had so much lovely support this year – it’s made a world of difference in a terrible year.

‘I hope people can get a little bit of hope from my story. I’m not cured – make no mistake – there is no cure for Stage 4 cancer but for now the scan is clear. It’s the best I can hope for. For now ……and I’m so so so grateful.’