How to dress like a grown up with Shane Watson: Skinnies are out — think big this season

This month I have mostly been wearing some khaki wide-leg trousers. I’m sharing this because it’s taken me by surprise.

I feel more at ease and better dressed in these £99 chinos (irisfashion.co.uk) than in any jeans, and every time I wear them I get asked where they’re from. (I’ve already been back to get the black ones.)

We’re talking about cotton chinos — nothing so special — but I think I know why. Apart from the fact they’re not denim (so that’s different), they’re not skinny or tight anywhere (other than snuggly fitted on the hips, thanks to the 2 per cent Lycra), and at this point, every woman is sick to death of skinny.

Yes, we’re wearing straight jeans, too, but they’re often still thigh-clinging. Yes, we’ve got floppier trousers for evening and some wide velvet ones that come out in winter, but we’re still waiting for permission to get into easier and more elegant styles full time. 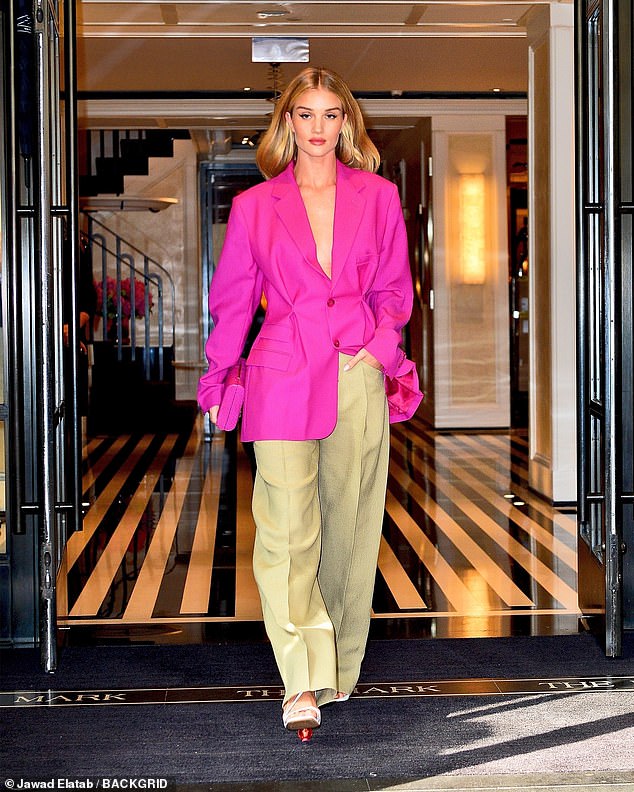 Trousers you can tuck a polo-neck into and look a bit Katharine Hepburn. Jeans that sit higher on the waist which don’t show the outline of your knees.

We want to look chic and relaxed and not just because we don’t have the legs of a supermodel, though that’s certainly part of it. Mainly, the skimpy look feels stale and teenagery, and we’re not going to take it any more.

Happily, we don’t have to. After several false alarms, it’s official: fashion website Lyst reports that skinny jeans are finally on the wane, and at the autumn/winter catwalk shows only about 10 per cent of trousers were skinnies.

The rest were straight leg, which, in practice, means anything from slim to baggy cargo style: pleat-fronted with high buckled waists at Isabel Marant; roomy with pockets at Dior; and Stella McCartney took her bow at the end of her show wearing high-waisted, wide-legged black cargo pants (with a tucked-in, grey V-neck sweater, if you’re looking for a tip on how to wear them).

The new trouser style — showing up on the influencers at Copenhagen Fashion Week last month and in a store near you — is wider in the leg, higher in the waist and cropped. We’ve moved on.

Fear not. This doesn’t mean we’re getting into Bay City Roller territory — we’re talking slim-wide, not palazzo. They don’t have to be cropped, either, but the gap is what makes them look current and stops you from looking all trouser and nothing but.

Everyone assumes cropped trousers are less flattering, but if cut higher on the hip and with the right footwear — trainers for casual, a fitted-on-the-ankle boot and, later on, a midi boot (you can tuck them in), they can be more flattering. Just don’t be tempted to wear this look with a delicate heel: it’s stacked or wedge heels or flats only. For a smart black pair that you could wear to the office or in the evening, try Warehouse (£39, Warehouse at johnlewis.com), or Jigsaw do a good cropped crepe trouser (£120, jigsaw-online.com).

This is a tucked-in look in general by the way: you want to be able to see the trouser waistband — as well as your shoes — even if you leave your shirt-tail out at the back.

Not forgetting jeans (because, remember, No More Skinnies). And Other Stories does just-straight-enough mid-rise jeans — cropped with a raw hem — in several colours (£59, stories.com).

If you’re not sure about a crop, there is always Me+Em’s wide transformer trouser, which can be worn long or with the hem buttoned up to above the ankle (£149, meandem.com).

Alternatively, if you love the cropped, wide look, you might want to start thinking along the lines of a longish culotte.

There’s only a few inches in it and culottes, real culottes, are going to be everywhere for autumn. Watch this space.