‘The worst thing on Asos’: Shoppers are baffled by fashion retailer’s bizarre barely there jeans that look like SUSPENDERS

Shoppers have been left baffled by a pair of barely-there jeans that have appeared on fashion website Asos.

The retail giant is selling a pair of black high-waisted jeggings with ‘cage suspender’ detail for the reduced price of £10, down from £35.

While the majority of the garment resembles a simple black pair of jeans, they are cut out in the thigh, with an unusual suspender detail leaving the skin completely bare.

And the bizarre design hasn’t gone unnoticed by customers, with one describing them as ‘the worst thing on the internet’.

London blogger Abby Woolf shared an image of the jeans, and wrote: ‘For anyone else playing the “worst thing on ASOS” game – put down your phones, I just won.’ 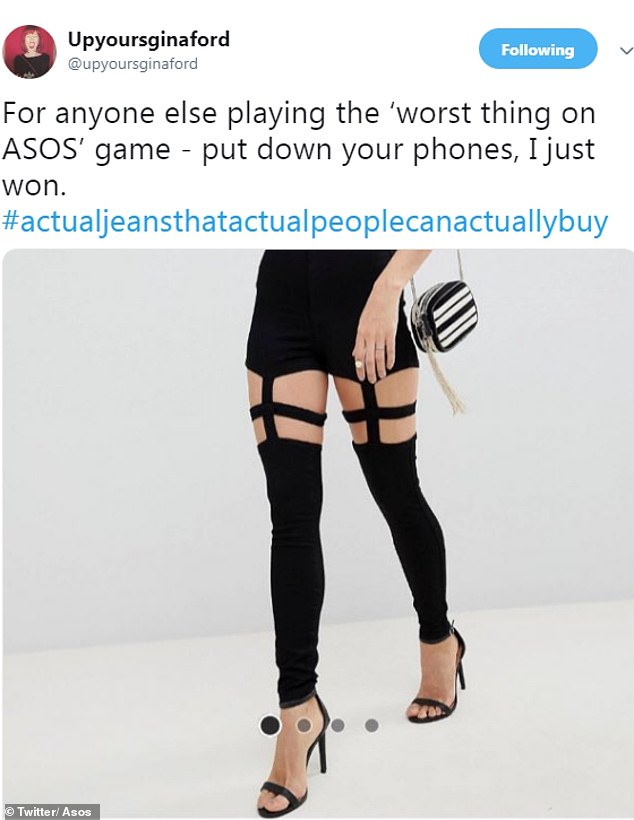 Blogger Abby Woolf shared an image of the 60 per cent off jeans, and wrote: ‘For anyone else playing the “worst thing on ASOS” game – put down your phones, I just won’. The jeans are advertised online as £10, down from £25 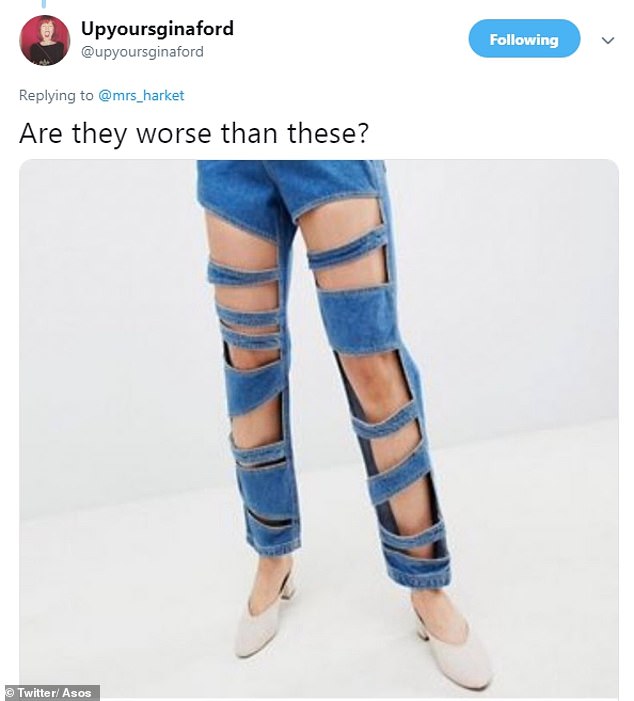 Abby also shared a snap of £11 ‘mom jeans’ with several cut outs in the leg. Asking if they were even worse than the first pair she shared.

She later shared a picture of another pair of jeans, questioning if they were worse than the first.

The picture showed a pair of £11 high waist slim mom jeans with several cut-outs in each leg, showing a lot of skin; Abby added that she ‘loves ASOS’ but hated the jeans.

It comes just weeks after another customer shared pictures of the retailer’s odd denim designs.

Cat Mitchell from Derby shared a montage of pictures writing: ‘If unnecessary holes being cut into women’s clothing stresses you out (which is certainly does me), the ASOS jeans section might not be for you…’

She then posted a montage of pictures of peculiar jeans from the retailer, including some with rips under the buttocks. 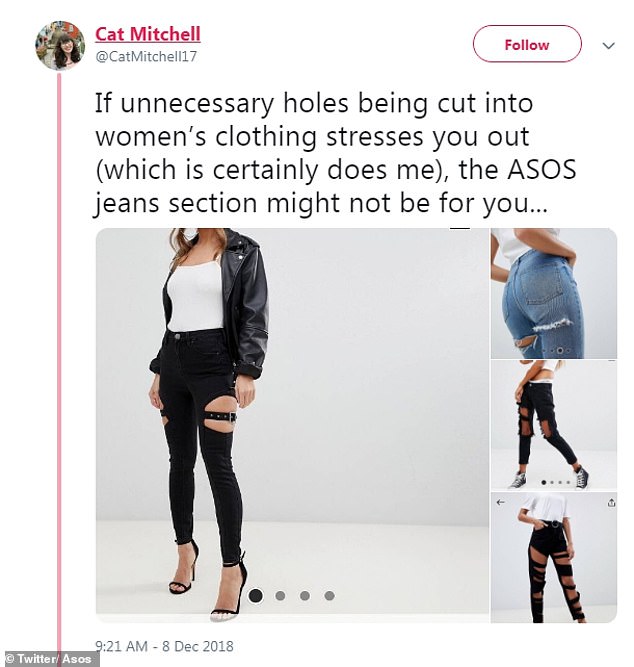 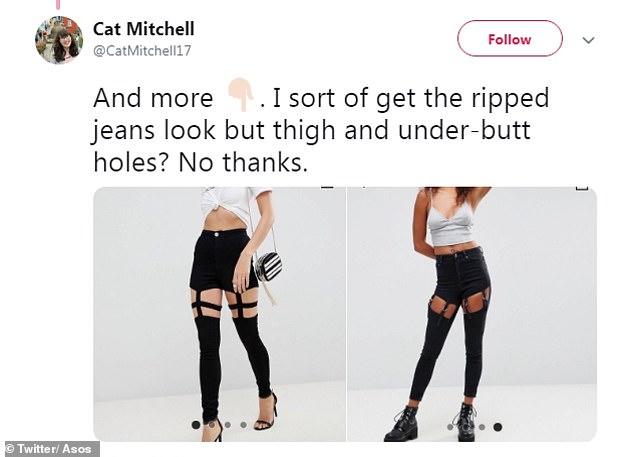 Cat, who works in publishing, added she understands the ‘ripped jeans look’ but not ‘under butt and thigh holes’

In a second tweet she added: ‘And more. I sort of get the ripped jeans look but thigh and under-butt holes? No thanks.’

Reacting to the daring new trend, one Twitter user joked: ‘Perfect for the school run!’

Another questioned: ‘Do 19 year olds actually buy this tat though? I’ve seen kids in all the holey jeans but jeezo,’ while a third commented: ‘Shivering just looking at these.’

Other users said they felt ‘terribly old fashioned’ and that they ‘couldn’t cope with the drafts’. 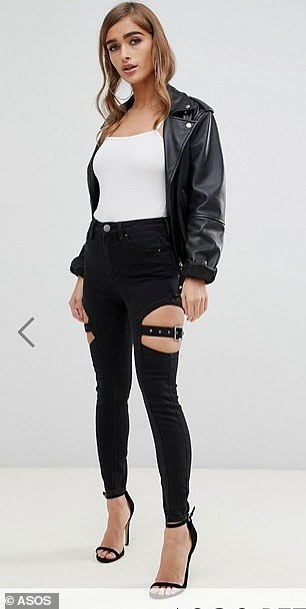 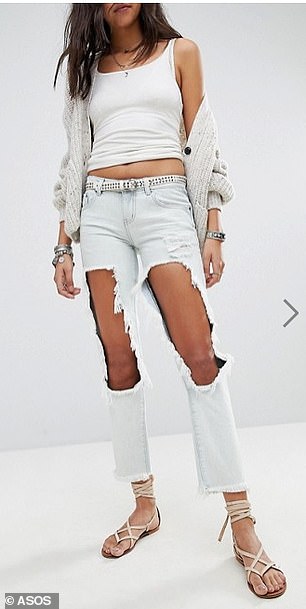 The petite bradley skinny jeans, which cost £35 (left) and the 80 per cent off extreme leg cut out jeans (right) have both been called out by shoppers 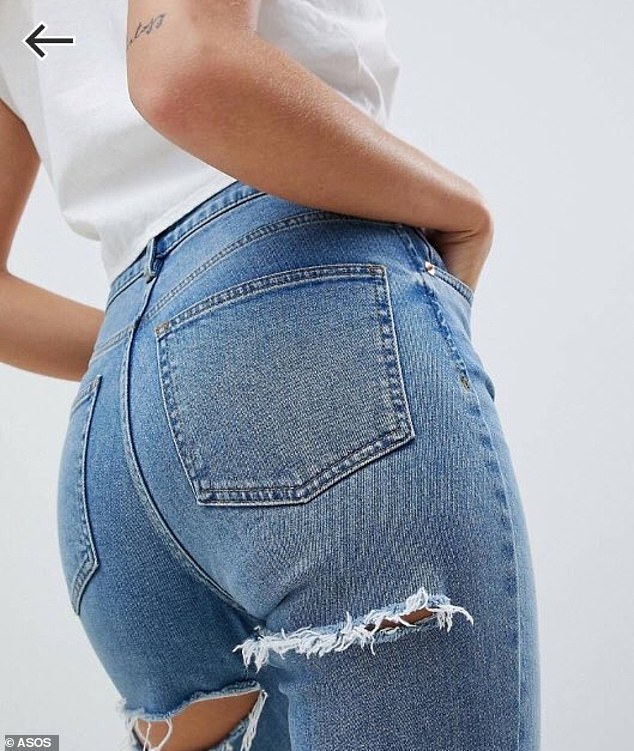 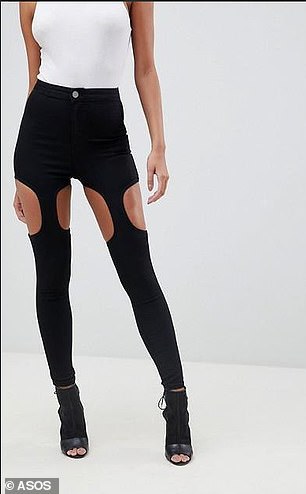 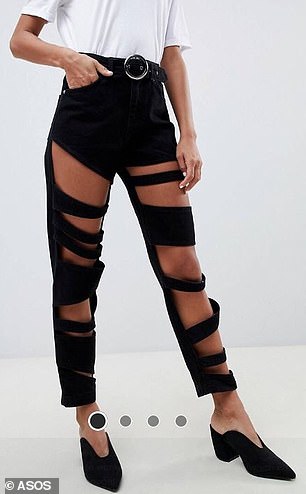 These black jeans were also shared by Cat, with Twitter users replying to her to joke they wouldn’t be able to cope with the drafts 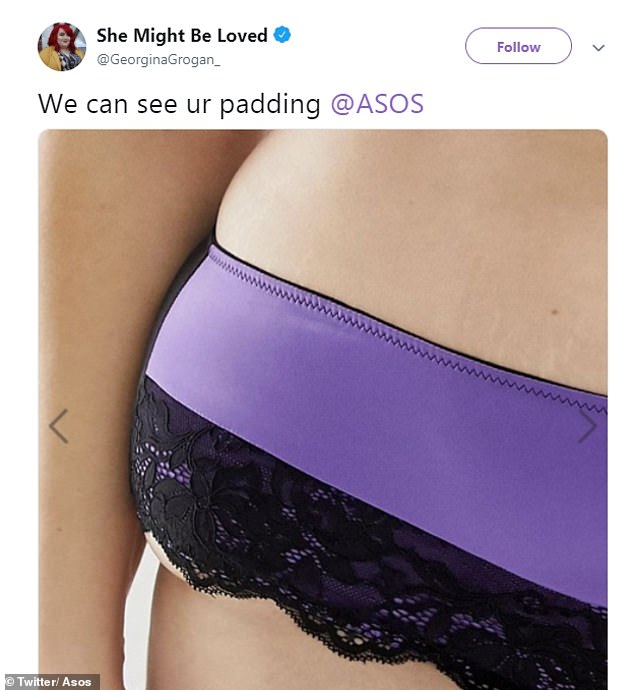 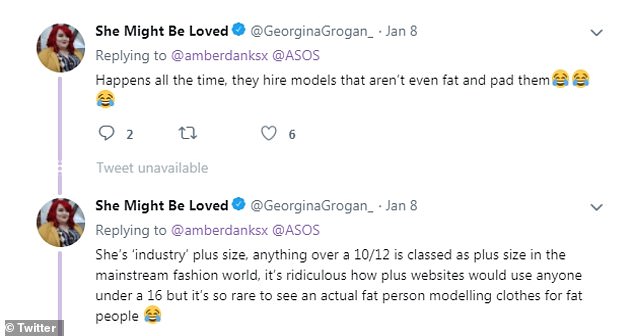 The unusual fashion choices comes after the retailer came under fire after a blogger pointed out that one of its ‘plus size’ models appeared to be wearing padding on the site.

Georgina Grogan from Sheffield took to Twitter where she boasts almost 22,000 followers, to share the apparently incriminating photo, which seemed to show padding poking out from a lingerie model’s briefs.

Many Twitter users have still tweeted the online retailer asking why they didn’t hire a plus size model.