On one thing I cannot fault Boris Johnson: his refusal, throughout this Conservative leadership campaign, to be drawn into discussions of his private life.

Asked again on Monday whether he planned to take partner Carrie Symonds to live with him at No 10, he said: ‘I’ve had a pretty ruthless rule on not commenting on that side of things and I don’t intend, if I may, to break it after 30 years.’

You could say he is obfuscating — and many will. But of all the stances he has taken during this campaign, this has impressed me most. Because it shows a degree of maturity and an admirable determination to try to keep his private life, well . . . private. 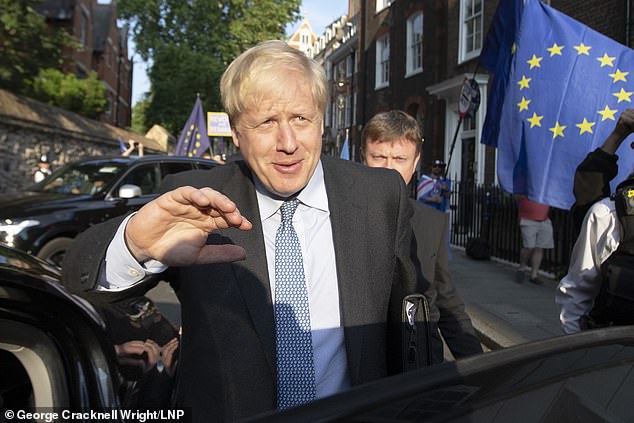 Boris Johnson, pictured, is correct not to discuss his private life during the leadership campaign as it shows a degree of maturity and admirable determination 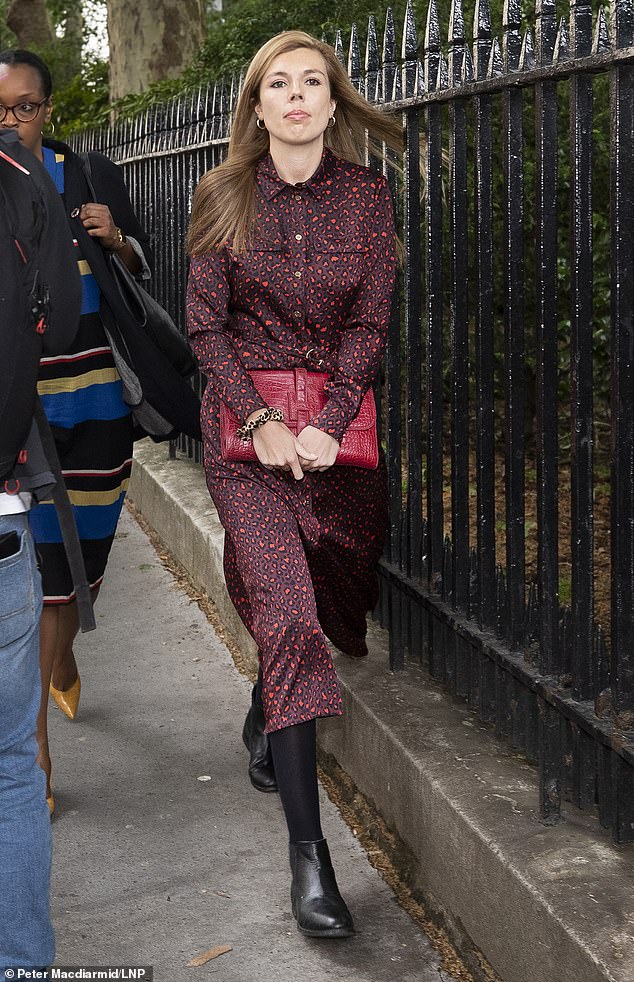 Carrie Symonds, pictured, should consider whether she wants to move into Number 10 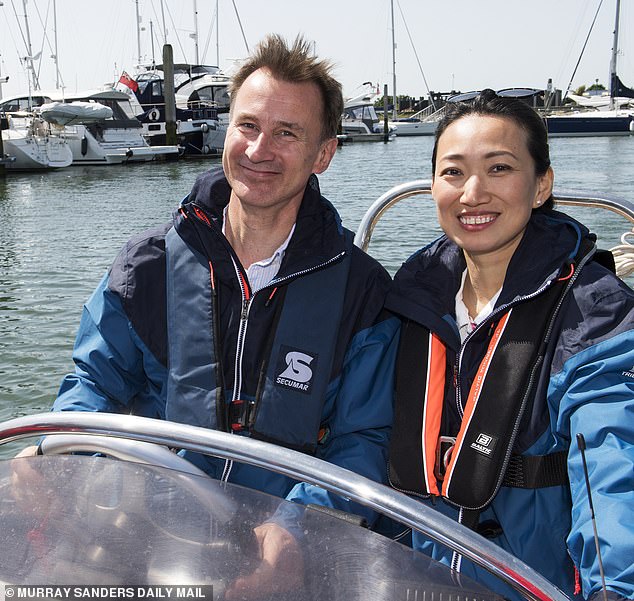 Jeremy Hunt, pictured with his life Lucia, will learn next week if he will be moving into Number 10 instead of Boris Johnson

For me it is an important red line, because it not only demonstrates a clear understanding of the personal challenges he will face if, next Tuesday, he does become prime minister. It also shows there are some things, namely the wellbeing of his loved ones, on which he will not compromise.

Some say brutal opposition in the Commons means he won’t last a week. Others that he will have 100 days to force through Brexit. All that will require a laser focus of concentration. It is not the time for catching up on box sets together on a Friday night.

But it’s not just that No 10 isn’t the best place to mix the political and domestic in these febrile times. Anyone seeking high office has to understand the extent to which they are exposing every aspect of their private life.

The days of political spouses bumping quietly along in the background, a la Norma Major or Clementine Churchill, are gone.

More from Sarah Vine for the Daily Mail…

Nowadays the personal is nearly always political, even for someone as deeply private as Theresa May, whose innocuous wheat-field dash has now entered British folklore.

A toxic combination of Brexit and the cockpit of social media have made politics a bloodsport, so Boris must be aware of the potential effects his ambitions may have on the mental health of those closest to him. He’s already seen a late-night spat with Carrie plastered across the media thanks to two Remainer neighbours.

Politics is a bit like childbirth: read as many books as you want, prepare as carefully as possible — but until you experience it first hand, the exact nature of how it’s going to affect you is never fully clear.

That is not to say these jobs don’t carry great privileges; simply that whatever advantages they confer don’t come cost-free. There is a price for everyone concerned, even more so for those — in particular children — without the maturity or mental stability to cope.

No 10 has great national significance, but it is not a place where families can thrive. It is the eye of the storm, the centre of all that is terrifying about British politics. Whoever wins this prize faces an almighty battle. And battlefields are no place for loved ones.

Boris Johnson and Jeremy Hunt say they will both give one of the top four jobs (Home Secretary, Chancellor, Defence Secretary, Foreign Secretary) to a woman. I would be much happier if they said they would give it to the best person for the job — be they man, woman or neither.

So Johnson is wise not to answer that question: only he and Carrie know whether their relationship is ready for the kind of pressure that would go with her being chatelaine of Downing Street at 31.

It should be they alone who make that decision.

If it were up to me, I’d hold off until things have calmed down a bit. And if Jeremy Hunt wins — as he yet may do — he might want to think carefully before thrusting his young family into the glare of the cameras. Because as one who has stood on both sides of that famous door, I can’t say I’d wish it on my worst enemy. 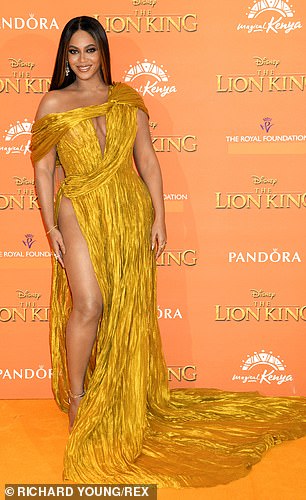 Beyonce needs to sack her stylist

I yield to no one in my admiration for Beyonce, but what in the name of all that’s holy was she wearing to The Lion King premiere the other night?

Seemingly made from Ferrero Rocher wrappers, her dress was so unflattering that even Queen Bey looked as if she had been living off little else.

I don’t care if it was custom couture (Cong Tri, apparently; no, me neither): Beyonce needs to sack her stylist — or, better still, get some real friends who aren’t afraid to tell her the truth.

Galling  as it is to see ‘Bandwagon Baroness’ Oona King using her status to coin it in Silicon Valley, at least if she’s abroad she can’t do too much damage.

Unlike Shami Chakrabarti, also ennobled by Labour. Chakrabarti presided over a 2016 report on anti-Semitism in Labour commissioned in the wake of, among other things, a vile Facebook post by Naz Shah MP. Chakrabarti (an avid Corbynista) exonerated the party of widespread anti-Semitism. So how come we have seen multiple resignations — including MP Luciana Berger — while eight former Labour activists have given evidence to the BBC’s Panorama corroborating what was long suspected: Labour under Corbyn is institutionally anti-Semitic?

Could it be that Chakrabarti, like so many, was appointed less for her talents and more for her willingness to please her master?

President Trump is like a toddler: constantly seeking attention. Hence the stream of idiotic/offensive/sexist/ racist tweets.

And as every mother knows, if you reward bad behaviour with attention, toddlers only do it more.

So instead of getting our knickers in a twist each time The Donald says something stupid, why don’t we all just stop following him? It would be one small step for each of us — and one giant step for the sanity of mankind. 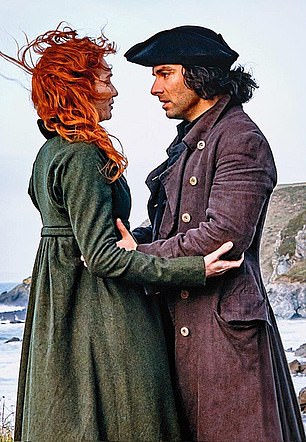 When Ross Poldark burst back on to our screens in the absurdly handsome shape of Aidan Turner, a nation swooned.

His bare-chested masculinity and quivering sexual tension, plus the beauty of the Cornish coast, made the show a ratings smash.

What a difference a few years make. The Poldark who resurfaced on Sunday seems to have been subjected to a post-woke BBC diversity re-education programme.

His raffish tendencies excised, Ross, plus Demelza and the rest, are engaged in a variety of improbable social justice campaigns.

It’s about as thrilling as talking global warming with Extinction Rebellion.

Where’s that scythe when you need it?

Princess Beatrice joins the growing list of celebrities embracing the vegan lifestyle, perhaps in the hope of ingratiating herself with Vegan Meghan. I wish her luck — I tried it earlier this year, and it was one of the most miserable (and windiest) few weeks of my life.

There’s a serious side to this: being vegan requires huge effort. I recently spent a few days in the company of a teenage vegan who existed mostly on chips, avocado and Haribo.

Delicious as this diet is, I’m not sure it is nutritionally complete. How many other starry-eyed young vegans are doing the same — and thereby storing up trouble for themselves in years to come?

Say what you like about Theresa May’s famously erratic sense of rhythm, but I rather admire her awkward dancing — at least she owns it.

The latest exhibition came at the black tie Henley Festival during the weekend, where Mrs May was spotted getting down in her now trademark jerky manner to hits by the Abba tribute band Bjorn Again.

You go, girl. After what you’ve been through as Prime Minister, you deserve it.

The truth about women and erotica

But the fact remains that the vast majority of pornography is geared towards male fantasies that objectify and demean women — and which have serious consequences in real-life.

Even if this study goes some way to debunking the long-held theory that men have a stronger reaction to visual sexual stimuli than women, you would have to go a long way to convince me that this stuff is in any way acceptable, let alone enjoyable.

What most women really respond to is not simply an image of a naked bloke, but an image which goes hand in hand with a desirable character — hence the infamous obsession of half the population with Colin Firth as Mr Darcy climbing out of a lake in a clinging wet shirt.