What we eat and drink is killing us, writes ROSE PRINCE, and we MUST act

We’ve all had those moments in the supermarket when we’re tired, harassed and time-poor.

Suddenly, it seems that only ready meals will do, and something satisfyingly sweet to comfort us afterwards – a pudding or cake, a packet of biscuits or a bar of chocolate.

Guilt-stricken, we fling them into our trolleys and head for the tills. And for many it is indeed just a guilty indulgence, an occasional reward in a stressful life.

Yet for tens of millions of people, it is quite the opposite. They are regulars in the aisles where cheap, addictive carbohydrates, highly processed meat, salt-laden pre-prepared meals and sugar-rich fare lurk in abundance.

Along with takeaways, that is what forms the basis of much of their diet.

That this national reliance on junk food – there is no better description – has drastic consequences for our health, our life span and the NHS is no secret. It has been underlined over the decades in countless news, scientific and medical reports, in research findings from think-tanks, and charities, and in the Government’s own research.

What we eat and drink is slowly killing too many of us. And yet fuelled by a vast and hugely profitable industry that aggressively promotes these foods – and lures in youngsters – we continue to consume it in vast quantities. 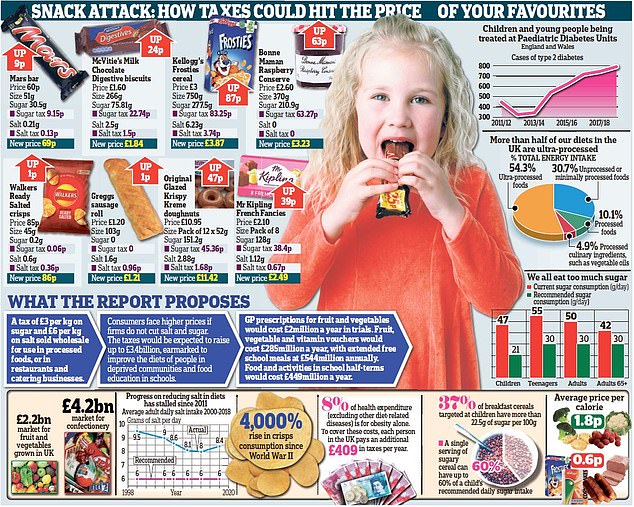 It details our ongoing and increasing reliance on heavily processed foods – something that no public health initiatives seem able to challenge.

Be THEY finger-wagging or encouraging, such campaigns seem to have put little dent in the national appetite, while the food industry shows no inclination to take itself in hand.

It is for this reason that, in his plan to reform Britain’s diet, Dimbleby, who is co-founder of the Leon chain of restaurants, wants mandatory reporting by manufacturers of the sugar, salt, fat and additive content of their products. More radically, he wants a tax imposed on the wholesale suppliers of the sugar and salt used in our unhealthiest foodstuffs.

Dimbleby’s recommended levy will, he believes, force the profit-driven food giants to reformulate their products to reduce the quantity of unhealthy and now costly ingredients.

There is little question that some of this cost will be passed on to the consumer – it’s already been dubbed a ‘snack tax’. And no doubt that will be greeted with dismay in some quarters, particularly by those who believe that such a tax will hit the low-income households who are the biggest consumers of branded meals.

I have some sympathy with that view but, as a long-time food campaigner, I wholeheartedly welcome Dimbleby’s proposition. It is only by such a dramatic top-down change that we can slow down the junk-food juggernaut that is destroying lives and costing the nation billions.

This is not something I write lightly. I am not generally in favour of increased taxation at any level. It smacks of Big Government. But only drastic action at corporate level is going to tackle the scale of the public health crisis facing us.

In Britain currently there are 13 million obese adults – a figure that has doubled in 20 years. Nearly one in four children start reception overweight or obese, rising to more than one in three by the end of primary school.

At the moment, £1 in every £8 spent on healthcare is going to fight type 2 diabetes, the form of diabetes largely related to diet and weight and brings with it a heightened risk of cancers and cardiovascular disease.

Long before the Covid pandemic cast its shadow, my GP told me the NHS was overwhelmed simply dealing with the consequences of obesity – from damaged hips to diabetes and its many debilitating consequences. 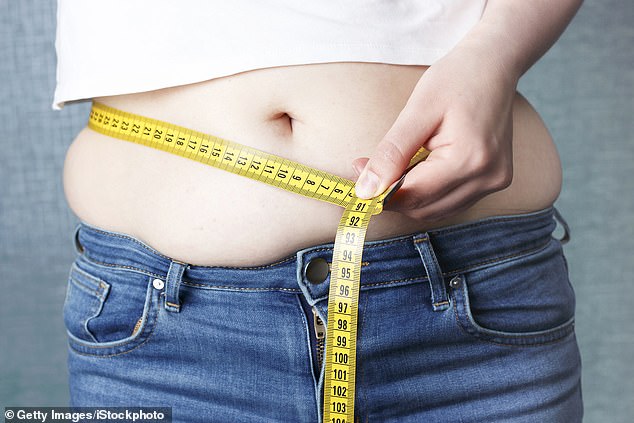 We’ve all had those moments in the supermarket when we’re tired, harassed and time-poor

This new report makes clear the link between obesity and poor diet, particularly among lower-income families, and the UK’s high Covid death toll. The big food manufacturers can no longer continue to feed our nation an unfettered supply of sugar, salt and trans-fats with barely any penalty.

And we know financial penalties work. The Government introduced the Soft Drinks Industry Levy in April 2018. This ‘sugar tax’ worked: a March 2019 report showed that sales of high-tier sugary drinks – those containing more than 8g of sugar per 100ml – dropped by 44 per cent per household over the following year.

It also made some manufacturers rethink their recipes, among them Italian soft drinks manufacturer San Pellegrino, which reduced the sugar content of its sparkling fruit flavour drinks to almost zero. Other companies have followed suit.

It’s a clear example of enforcing change from the top: no-one, be they an individual or a big corporate, wants to pay more tax. Nor, of course, do they want to lose sales.

If wholesale suppliers of sugar and salt are taxed at source, the manufacturers to whom they will in turn pass it on will have to improve the quality of their food – by reducing salt and sugar – if they want to avoid it.

This ‘snack tax’ must be firmly aimed at the manufacturers who use salt and sugar to conceal the low-grade ingredients in their chicken nuggets, pizzas and other ‘grabbable’ food, and not responsible and artisanal producers who use good quality, natural fats and seasoning and sugars.

But I would go further and target the fast-food chains and delivery services which are also fuelling the country’s obesity epidemic. Sixty per cent of us now have food delivered on average twice a month, a mind-boggling £10 billion-a-year market.

Of course, tax is only part of the answer, and must go in tandem with other methods.

Last week, we learned that adverts for junk food would be banned on television before the 9pm watershed – an announcement that while welcome, felt rather late in the day given a vast swathe of the population has turned from mainstream television to streaming services.

And to the politicians who fear being accused of playing ‘Nanny’ to the nation, what is wrong with highlighting the bad and praising the good?

During the Second World War, the Government proved very adept at this. Good food was scarce, but they managed to teach people to make do with what they had. It was tough, but our population has never been healthier or slimmer since. We are no longer in a war, but a different sort of crisis – one which is every bit as threatening to life.

 Rose Prince is a food writer and activist