A privileged student is left open-mouthed in shock when he learns the single mother he is staying with feeds her family on just £40 a week.

Freddie, 20, is the son of furniture company CEO and lives at his parents’ four-bedroom townhouse in Chelsea, west London.

No strangers to luxury, the family have a villa on the Spanish party island of Ibiza and spend an incredible £20,000 on luxury getaways every year.

Freddie, who boarded at a £36,000-a-year school, spends his weekends at London’s exclusive nightclubs and reveals his ‘best holiday ever’ was a jaunt to his friend’s private island in Mozambique.

But the jet-setter swaps his plush king-sized bed for a sleeping bag on the sofa when he spends the weekend living with single mother Charmaine, 34, and her children Sean, four, and Shayla, two, at their two-bedroom home in Watford on 5STAR’s Rich Kids Go Skint. 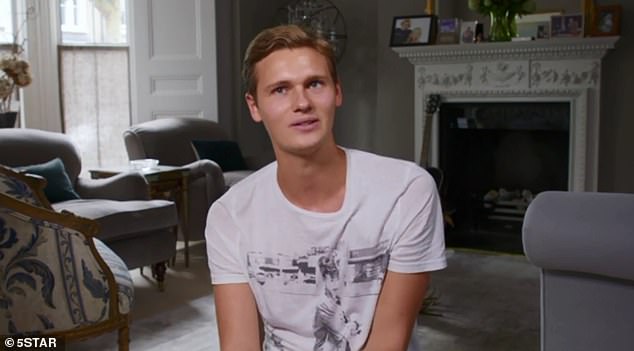 Life of luxury: Freddie, 20, is the son of furniture company CEO and lives at his parents’ four-bedroom townhouse in Chelsea, west London. He swaps his king-sized bed for a sofa when he spends the weekend living with single mother Charmaine on 5STAR’s Rich Kids Go Skint 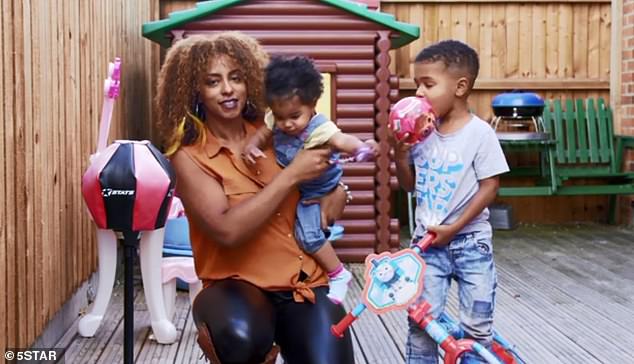 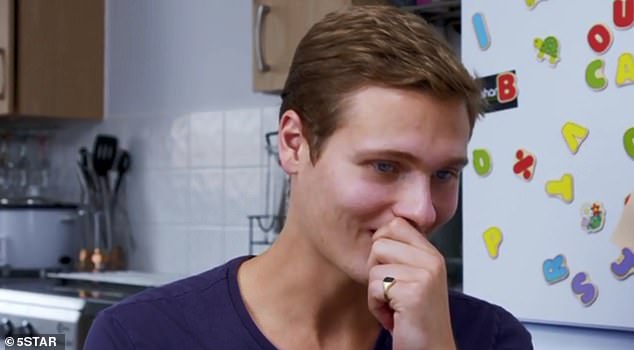 Reality check: Freddie is left speechless with shock at several points during his stay, including when he discovers Charmaine, who lives off benefits and child support, has a weekly food budget of just £40 and a £12 in disposable income once her monthly outgoings are settled 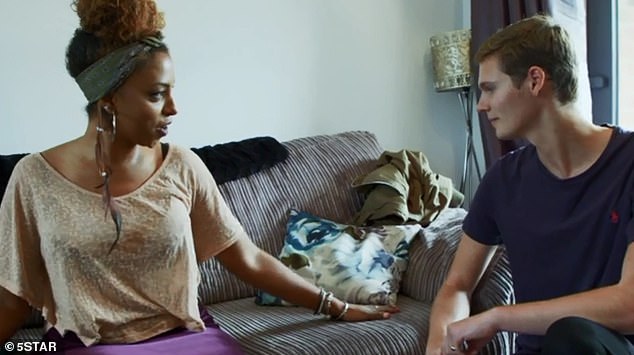 Broadening his horizons: Freddie spends his first ever night on a stranger’s sofa his stay. The student, 20, experiences what life is like for those not funded by the bank of mum and dad

Aspiring life coach Charmaine, who was left homeless with her son when her marriage collapsed three years ago, lives off benefits and child support.

Going through her strict budget at the kitchen table, she explains to Freddie that she sets aside £40 to feed her family.

The figures shock property development student Freddie, who admits to spending £200 on a two-course meal and thinks nothing of splashing £300 on a night out in a London club.

When Charmaine reveals she has just £12 in disposable income once her monthly outgoings are settled, Freddie says: ‘It’s an amount of money I could easily spend and not think about… I don’t even know what to say really.’

‘I’m just really shocked how positive and happy you are and how great you are with the children, and you’ve got £12 a week to spend and everyone seems to be happy.’ 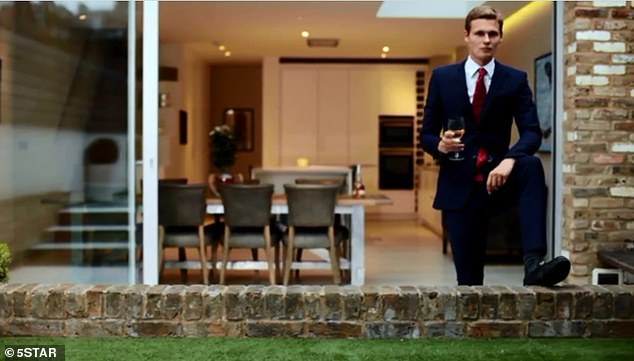 City boy: Freddie with a glass of wine in the garden of his parents’ four-bedroom London townhouse. The family, who spend £20,000 a year on holidays, also have a villa in Ibiza 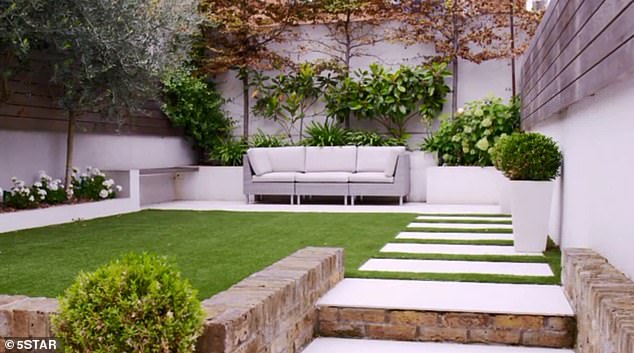 Family money: The perfectly manicured back garden of Freddie’s family home in London. His parents sent him to the prestigious £36,000-a-year Milton Abbey School in Dorset 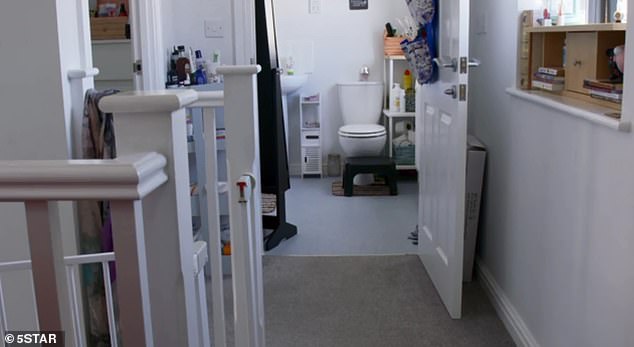 Compact: Charmaine’s takes great pride in her sparkling clean family home in Watford, pictured. She is surprised to learn Freddie’s family has five bathrooms in their London home 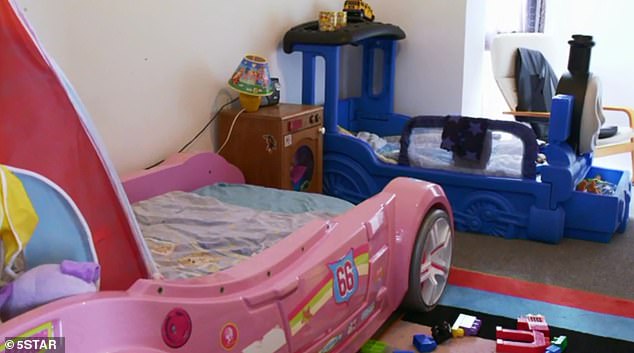 Freddie spends the weekend with Charmaine and her family to experience what it is like to live on the breadline without the backing of the bank of mum and dad.

The 20-year-old joins Charmaine on a rare family meal out to Harvester and is struck when she reveals she orders a single dish to share with her son and daughter.

‘She’s looking for the deals, not what she wants to eat, which is a bit upsetting,’ he says, before picking up a meal as a small gesture for the family.

Mother-of-two Charmaine later takes Freddie on an outing to the pet shop, which provides a free source of entertainment for her children. Once again, her guest is left in awe of her approach to parenting.

‘Charmaine is incredibly creative,’ he explains. ‘She’s always thinking of things that are going to be enjoyable for their children yet are not going to be expensive.’

The divide between them is greatest when Charmaine and her sister Naomi quiz Freddie on his background during a visit to their mother’s house.

The table is left speechless when the student reveals he boarded at the prestigious Milton Abbey School, in Dorset. 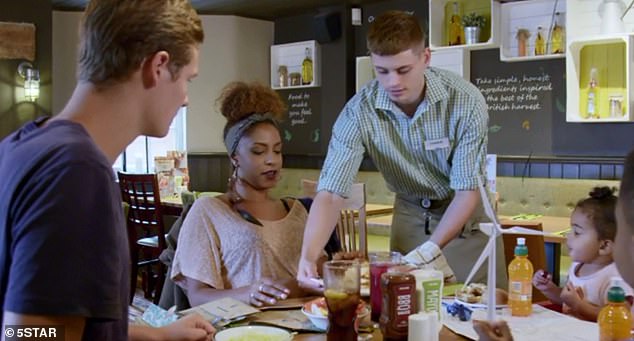 How the other half live: Freddie joins Charmaine on a rare family meal out to Harvester and is struck when she reveals she shares a single dish with her son and daughter, pictured 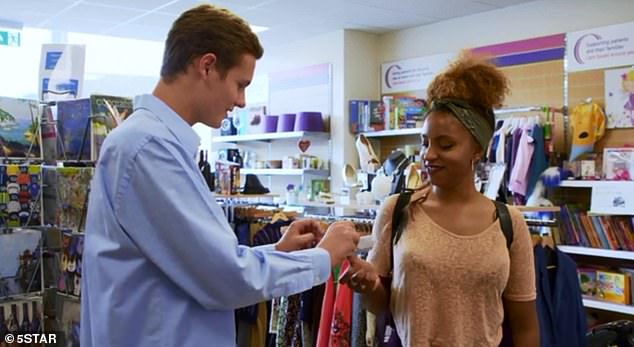 Thrift shop challenge: Charmaine challenges Freddie – who typically dresses in hand-tailored suits and designer clothes – to buy an entire outfit from a charity shop with just £15 and is delighted when he returns with £4 change. Pictured, Freddie in his first ever bargain buys

Embarrassed, he reveals: ‘My school, you could do shooting. We had a sailing academy as well. We had a nine-hole golf course. We had our own abbey… It’s quite embarrassing to say but it’s £36,000 a year. So it’s a lot of money.’

Charmaine is left shocked by the amount, saying she could only ‘dream’ of earning £36,000 a year.

‘And he’s spending that on education,’ she continues. ‘It’s madness. He’s so privileged and so lucky.’

In a light-hearted moment Charmaine challenges Freddie – who typically dresses in hand-tailored suits and designer clothes – to buy an entire outfit from a charity shop with just £15 and is delighted when he returns with £4 change.

She later sets Freddie a second challenge: to take her £40 weekly food budget and buy enough to feed her family for the next seven days.

The idea leaves Freddie, who has never paid a bill before, visibly anxious.

‘I’m actually quite nervous about this now,’ he says rubbing his forehead. ‘I’m in charge of a someone’s weekly food budget. That’s like being made to go into a cockpit of a plane and land it.’

While Freddie does his best to identify the bargains – and ultimately comes in £6 under budget – Charmaine is less than impressed with his take on cut-price meals.

‘I think it’s a little bit like cliched food that someone in my position would eat,’ she says, noting there is far more frozen and processed food than she would normally purchase, and adds: ‘I think normally in a week I would buy a lot more fresh vegetables and fruit.’

However the pair ultimately form a close bond, with Charmaine telling Freddie he is far less ‘snobby’ than she had imagined and Freddie returning the compliment by praising her charming home. 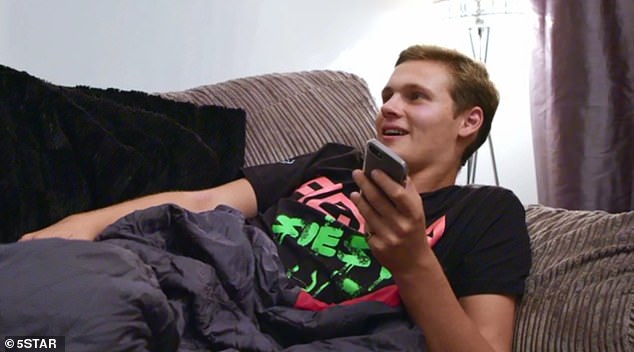 Life lessons: Freddie, pictured following his night on the sofa, forms a close bond with Charmaine and his children and reveals how he has learnt about the importance of resilience

‘I thought it would be a really grotty area with rabid bulldogs,’ he confesses in a candid conversation in the well-kept garden. ‘And you live in such a lovely house and that’s not something I expected.’

The mother-of-two once again leaves her guest speechless when she reveals how she spent 16 months living in a hostel after being left homeless when she separated from her husband.

‘Me and [my son] Sean had one room that was maybe half the size of this garden and then two weeks into living in this place I found out I was pregnant again… [But] I just chose to see that as my making point rather than my breaking point.’

‘I don’t even know where to start with that,’ he says. ‘This is one of the most shocking but most amazing things to hear. Just being so positive and just being able to make something of yourself. That would just break pretty much everyone in that boat.’

Before leaving, the pair open up over a bottle of wine and Freddie thanks Charmaine for opening her home to him.

‘I’m so happy that I came here this weekend and I feel so lucky and honoured that I got to spend it with you,’ he says.

‘[I’ve learnt a lot]. Even if you’re in a bad situation, rather than being down in the dumps, or break. Find the positive side out of it.’