Cabinet minister Linda Reynolds has given a statement to police about the alleged rape of her former staffer Brittany Higgins by a colleague in Parliament House in March 2019, and is prepared to be interviewed if required.

For now, the senator is focusing on her new government services portfolio and negotiating changes to the National Disability Insurance Scheme. 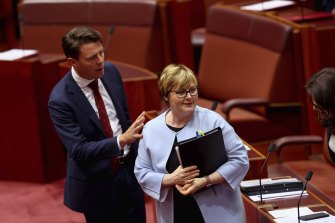 Government Services Minister Linda Reynolds returned to work this week and is focused on overhauling the NDIS.Credit:Dominic Lorrimer

In her first sit-down television interview since returning to work, Senator Reynolds told Nine News the past few months had been a difficult time for everyone. She took a period of leave for a pre-existing heart condition after coming under pressure for her handling of Ms Higgins’ allegations.

“One of the things I’ve rediscovered in this job is … when we become politicians, we’re not immune to human illnesses and conditions,” she said.

Senator Reynolds confirmed she had finalised a written statement to police investigating the allegations and was “absolutely” prepared to be interviewed.

“I’m doing everything I can to assist the AFP inquiry into the matter,” she said.

Scott Morrison also revealed on Thursday that his department head, Philip Gaetjens, restarted his inquiry on Monday into who in the Prime Minister’s office knew what about Ms Higgins’ allegations and when.

Mr Gaetjens had paused that work in March after speaking with AFP Commissioner Reece Kershaw. He is yet to tell Mr Morrison when he expects to finish it.

Senator Reynolds’ focus on the NDIS is twofold: to overhaul legislation so participants don’t have to have their plans reassessed every year, and to put it on a sustainable funding footing for the Commonwealth including continuing a push towards the controversial independent assessments.

Her key priority is to legislate “real and significant changes for participants”.

Last week, Mr Morrison warned the scheme faced billions in blowouts as costs increased faster than anticipated. However, its growth is on track with forecasts made by the Productivity Commission in 2017.

The federal government put another $13.2 billion into the NDIS over the next four years in this week’s budget.

Senator Reynolds defended independent assessments, which some in the sector fear are a Trojan horse for cutting the amount people with disability receive in their programs.

She said it was always anticipated the scheme would incorporate them.

“Every other insurance scheme in Australia and globally have independent assessments because that way then you get consistency across not only geographically but also people with similar types of disabilities have a consistent assessment process,” she said.