Chefs will be allowed to trade away their penalty rates, overtime and allowances in return for a flat rate of at least $82,400 for up to 57 hours of work a week in an attempt by the industrial commission to tackle widespread wage underpayment at fine dining establishments.

Many of the underpayment scandals exposed in recent years relate to chefs or other staff working huge hours without being paid allowances, overtime or hourly wages to match the length of their shifts. The new arrangement, which was proposed by the Restaurant and Catering Association, an industry lobby group, aims to address that by simplifying the process of paying chefs. 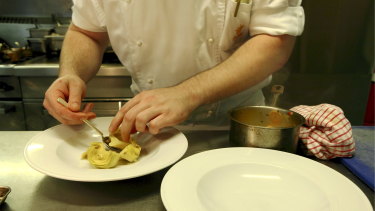 Underpayment has proven widespread in the hospitality industry.Credit:Jessica Shapiro

Fair Work Commission president Iain Ross published a decision on Thursday that set out two major changes to the industry’s pay rules in addition to the new regime for chefs.

Rather than using about a dozen different ways of classifying and paying employees with set duties that separate those responsible for washing up from others responsible for collecting plates, the Fair Work Commission plans to introduce three new general purpose roles.

Employers confused or frustrated by the industry’s many different extra payments and loadings, such as tool allowances and meal payments, will be able to forgo them and instead pay staff about $1 more an hour to compensate. That will require a 75 per cent majority vote of the workplace or an individual written agreement.

Individual written agreements will be required for the chefs’ deal, but it is not a blank cheque for endless work: chefs on the new pay rules who do more than 57 hours a week will be paid 1.5 times their wage up to 59 hours and double time thereafter.

It is a landmark win for the industry and will test whether the problem really is complexity, as the industry argues is largely the case, or just business owners who are determined to shirk wage rules by working staff for more hours than they want to pay.

Restaurant and Catering Association boss Wes Lambert enthused about the changes, saying they were “nothing short of revolutionary”.

“[They] will allow tens of thousands of struggling hospitality businesses across the country to gain access to the flexibility and simplicity they need to recover from the devastating impacts of the COVID-19 pandemic,” Mr Lambert said in a statement.

Initially, the changes will operate for a year from August with oversight from a committee including the United Workers Union, which represents hospitality workers. There will be a review nine months in, which will determine whether the new plan will become permanent.

“We’re pleased the Fair Work Commission adopted the cautious approach to these changes advocated by United Workers Union members, by taking up the additional safeguards union members said were essential if the changes were to go ahead,” union official Ben Redford said.

The Morrison government attempted to overhaul Australia’s industrial laws earlier but was largely defeated in the Senate earlier this year by Labor and crossbench opposition. However, as part of that process former Industrial Relations Minister Christian Porter had written to the commission urging it to work to simplify several sectors’ pay rules to help the economy recover. Thursday’s announcement stemmed from that letter in December 2020.