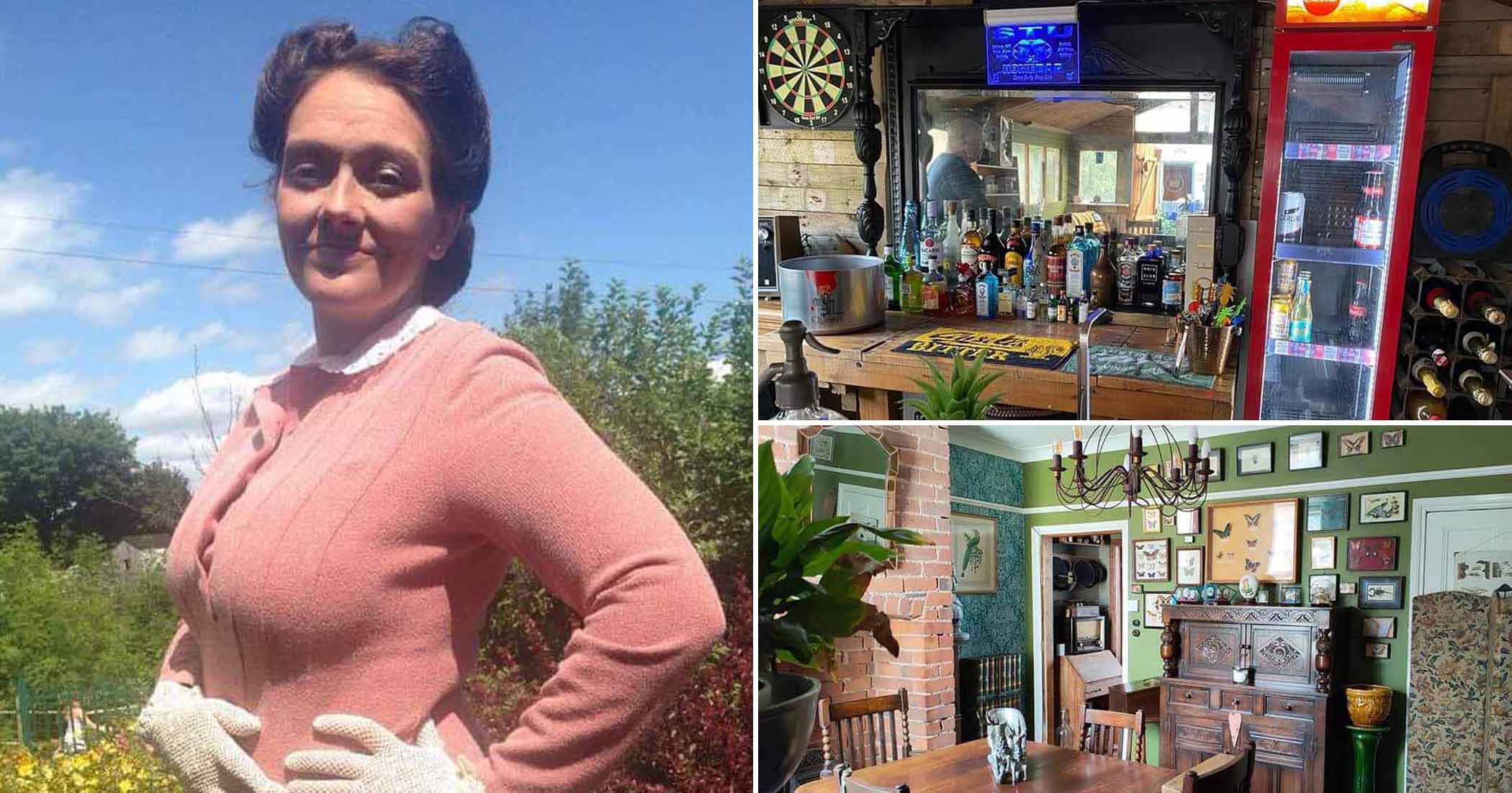 Time travel might not be possible, but designing the interiors of your home to embody the spirits of eras bygone could be the next best thing.

A retro-loving couple have done just this, with each room in their house jumping between the 19th century and the 1960s.

Emma Tighe, 43, who owns retro emporium Vintage Dolly, has let retro aesthetics into all aspects of her life after marrying postman Stuart Tighe, 47, in a 1930s-themed wedding in 2014.

Now their Edwardian terrace is all about vintage.

Emma, of Kidderminster, Worcestershire, said: ‘History and vintage have been lifelong loves for me.

‘I love historical programmes and period dramas, like Downton Abbey. I would have loved to have been alive then.

‘Our house is the ultimate time warp home – we can time travel between the rooms.

‘I’m like a period interior designer. I love to help people share my passion for the past.’

Stuart embraces her love of vintage kitsch, which is at its most prolific in their Cadbury themed kitchen and Victorian hallway – there are even touches such as taxidermy and sepia family photos.

The kitchen cupboards are stocked with Cadbury tins and the walls are covered with vintage signage.

‘But, to me, it feels like I’ve nipped to a few car boots and spent a couple of hundred quid.

‘You can never put a price on it as it’s stuff you love.

‘We joke with my son that there’s no money in the bank, as it’s all in antiques.’

Growing up in Bournville, Birmingham – within sniffing distance of the Cadbury chocolate factory – Emma’s love was born as a result of visiting her great aunt and uncle’s 1940s-style home.

She said: ‘My great uncle was my absolute hero. All my happy childhood memories are there.

‘I used to stay with them and come home to egg and chips for tea, followed by peaches and custard. I’d wash in a basin with a towel heating by the gas fire and sleep in a bedroom with antique furniture.

‘Everything was like it would have been in the 1940s. It’s stayed with me and that’s why our house is the way it is now.’

When Emma and Stuart went on their first date after meeting as neighbours, it was to an auction – setting the tone for their future together.

‘It was quite magical,’ Emma said. ‘I joke that I’m either Mrs Tighe the Third, as Stuart’s been married twice before, or the girl next door.’

Soon after, she accepted Stuart’s marriage proposal and planned the ultimate vintage wedding.

In tribute to her beloved stepdad, a steam train fanatic, she decided they should marry at the nearby Severn Valley Railway in a hired carriage on the historical line.

‘Before he died, I promised we would marry there in his memory,’ she said.

‘Everything matched the vintage railway setting.

‘I wore a 1930s-style dress and we decorated the tables with a 1930s-style newspaper all about our family, called The Daily Tighe.

‘We had to search high and low for a top hat and tails for Stuart, like Fred Astaire.

‘I even insisted he take dance lessons, so we could give our guests the picture-perfect waltz.’

The dream wedding fuelled her determination to turn their home into a retro wonderland.

Visiting car boot sales, fetes and auctions, she said: ‘We’d put everything from the wedding in the cellar and I sold it all on Facebook Marketplace, which made a profit and fuelled our desire to decorate the house.’

That also inspired Emma’s career change, which came in 2015 after she quit her job as an autism specialist to run Vintage Dolly.

She said: ‘I started out running the business in our shed, but now I’m even holding vintage events for the Black Country Museum.’

Parting company with retro items can be tough for Emma.

‘Often, I can’t bear to part with pieces I find,’ she said. ‘I have to bring them home to love them for a little bit longer, and they never leave!’

This shows in their home deco, which begins with Emma’s ‘gentleman’s club-style’ Victorian living room.

She put it together in 2014 after finding a cabinet from the era at an auction.

She said: ‘We found vintage Chesterfields and wingback chairs, too. The cabinet is full of old tea sets, books and vintage children’s shoes.’

Then she restored skirting boards, ceiling roses and cornicing to capture the sense of history.

She said: ‘The hallway came next. We’ve got taxidermy, old family photos, and Stuart loves mechanical things, so we’ve got a Victorian lift pulley and a World War One era telephone.

‘The dining room took five years to do. We had a huge leak from the bathroom – a pipe burst and we came home to half a ceiling.’

Then in 2019, the couple designed a 1960s-style upstairs bedroom, featuring a Love Heart sweets wall art.

Come lockdown, the pair saw it as an opportunity to get creative so built a 1980s bar in the garden shed.

Emma said: ‘We both love the 80s and with pubs closed in lockdown, we decided to do it.

‘The bar is from a 1980s nightclub and was Stuart’s birthday present in March 2020 from me.

‘We spend more time in there than anywhere.’

On VE Day during the pandemic they invited neighbours to a 1940s street party – complete with Union Jack bunting, 40s gramophone hits, tea and cucumber sandwiches.

Emma said: ‘History is such a big thing in my life and I’m a huge royalist. I’m so proud of winning the Second World War – it just had to be celebrated.’

Emma’s love of history also shows in her wardrobe, which is made up of vintage dresses, plus she uses classic red lipstick shades and sets her hair into 1940s rolls, with an authentic 1930s comb.

She said: ‘My favourite era is Victorian. I love the beautiful sewing boxes full of gorgeous silks, the clothes the women wore and how smart the men were.

‘They did so much inventing and put the UK on the map as an industrial powerhouse and a fantastic country.’

Emma and Stuart’s current project is a 1930s bedroom, inspired by the romance of their wedding.

‘If you’ve got a 1970s house, you’ll feel so much more at home if you decorate it in keeping with the era.

‘These things are so special and I love to see people value and enjoy them.

‘Who needs a Tardis when you can be time travellers in your own home?’