Restaurants are dropping meat from their menus in an effort to cut costs as well as appeal to the growing number of diners interested in plant-based food, according to new data.

Numbers from Lumina Intelligence, a food and drink market research company, show a ‘notable decline’ in the number of dishes containing meat served at restaurant chains in the last year, the Guardian reports.

Last summer, only 20 per cent of dishes served at such eateries contained meat according to the data, down from 24 per cent from last spring.

Katherine Prowse, senior insight manager at Lumina, said the reduction came about in an effort by restaurants to reduce their costs amid inflation, as well as meet customer needs. 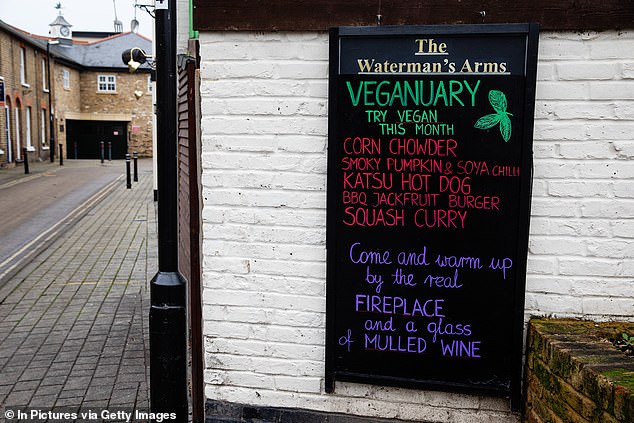 ‘The impact of Veganuary should not be ignored’, according to a marketing and insights manager, who says the initiative inspires ‘a full conversion to vegan eating’ for some, and prompts others to opt for the plant-based option for some meals (pictured: a pub in Eton advertises its Veganuary menu earlier this month)

Describing the decline as ‘notable’, she added: ‘We’re seeing trends around healthier living and around eating less meat, and restaurants are tapping into that. The benefit is they can manage costs at the same time because they’re saving on meat and saving on portion sizes.’

Katherine Prowse added that while Lumina believes the ceiling for how much of the menu share will be given to plant-based foods has been reached, they are ‘also seeing the expansion of vegan-only restaurants or with menus that are completely vegan’.

Speaking about the growing interest in vegan food, Kirsty Matthews, marketing and insights manager at Macphie, told The Caterer: ‘Every year the Veganuary campaign prompts a new surge of vegan eaters.

‘For some, it causes a full conversion to vegan eating, and for others it means simply occasionally going for the plant-based option. Either way, the impact of Veganuary should not be ignored.’ 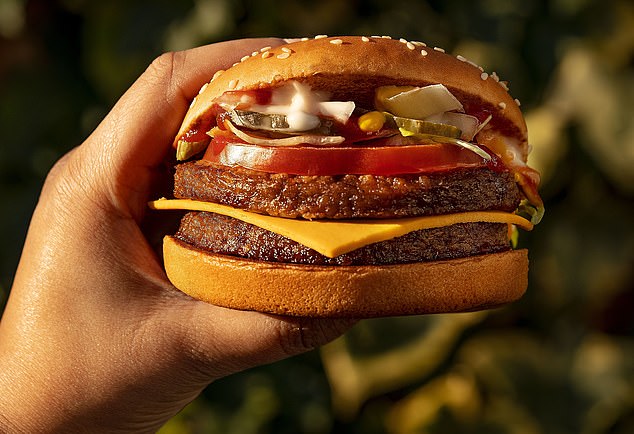 Fans have been clamouring for the fast food chain to launch a Double McPlant (pictured) since it released its single-patty version of the sandwich in 2021. It responded to demand earlier this month with the launch of its new sandwich

The annual initiative has seen exponential growth since its launch in 2014, with some 2 million people taking part in that time.

Speaking about hitting the milestone, Matthew Glover, co-founder and chair of Veganuary, said: ‘When my wife Jane and I decided to launch a new year’s vegan pledge in 2014 we expected only 1,000 people to take part.

‘More than 3,000 signed-up and we were blown away. Now Veganuary is a bigger feature in the retail calendar than Christmas, reflecting the ever-increasing number of people choosing plant-based food.

‘Two million official Veganuary participants in just eight years is a huge achievement, but the explosion in plant-based products that has accompanied it is truly revolutionising the future of food.’

Among the new vegan products launched for this year’s Veganuary are McDonald’s Double McPlant burger, Heinz’s dairy-free version of its classic tomato soup, a plant-based terriyaki steak sandwich from Subway, and new pizzas from Papa John’s.