QUENTIN LETTS: Mr Attorney’s booming voice was as deep as a tuba’s lament

QUENTIN LETTS: Mr Attorney’s booming voice was as deep as a tuba’s lament

Geoffrey Cox’s debut as Attorney General. Mr Cox, MP for Torridge and West Devon since 2005, was catapulted into office recently from the backbenches.

Anyone else might be daunted – shrivelled – by instant promotion to the Cabinet. Mr Cox has taken it in his substantial stride.

Looking at him, you may wonder how this top-guinea grandee of the Bar has not been a Rt Hon since at least Mrs Thatcher’s first term, back when ministers were chauffered in Rover P5s and a senior jurist’s day started with kedgeree and a languid Cigarillo. Geoffrey Cox, (above) MP for Torridge and West Devon since 2005, was catapulted into office recently from the backbenches

Mr Cox has bottom. More bottom than Bideford Bay. I mean bottom not so much in the bodily sense – though he’s big-boned, with enough cloth in the seat of his spongebags to cover a Prebendary’s hassock – as in the aura that surrounds him.

In his gestures, his language and most of all his booming, basso voice, which may have been coated in teak oil, here is a creation of wondrous ballast.

In another age they could have used him as a mooring post for barrage balloons.

He sat on the Government bench yesterday mid-morning without apparent nerves, his formal attire (on this occasion no waistcoat) topped by Axminster eyebrows.

Questions to the Attorney General is seldom the edgiest of events in Parliament’s diary yet any ordinary mortal, preparing to stand at the despatch box for the first time, would be a-flutter. Mr Cox looked entirely at his leisure. Colin Cowdrey in the pavilion waiting to bat in a county match never looked so unperturbed. 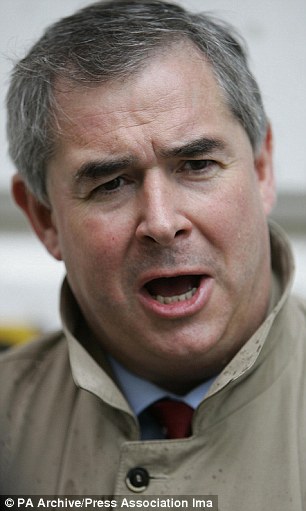 He sat on the Government bench yesterday mid-morning without apparent nerves, his formal attire (on this occasion no waistcoat) topped by Axminster eyebrows

He allowed the Solicitor General, Robert Buckland, to take the first question, on knife crime.

This Mr Buckland did with his customary, Welsh-clipped efficiency. If longish-server Buckland (a Remainer) nurtures resentment that Mr Cox (a Leaver) was promoted over his head, he commendably conceals it.

How maddening for the compact, humble-born boyo. If only he had managed better to disguise his Europhile leanings, that could have been him walking up Downing Street to become Mr Attorney.

Instead the vacancy went to this ripe Cox, in part because Theresa May needed a Brexiteer at top table.

The moment arrived for Mr Cox’s first taste of action: some questions about the Serious Fraud Office. A hint of folded handkerchief in his top pocket, he lumbered to the box and unbolted his mouth no faster than a Channel ferry preparing to unload.

Out came a slow-moving noise, deep as a tuba’s lament. It really is a magnificent voice, so remarkable that few in the House bothered to process the actual content of Mr Cox’s answers.

They just marvelled at that sound, more resonant than Chudleigh Cavern, the sort of gravelly rumble you might hear from the intestines of a hippopotamus on the Atkins diet.

As Mr Cox vouchsafed answers, he dropped a hand into his jacket pocket. He turned. He leaned on the box, just about remembered not to call Speaker ‘my lord’ and touched his spectacles before altogether removing them. He failed to notice that he was meant to be answering another query and needed to be reminded by the Chair.

Others might have blushed. Mr Cox returned slowly to his station with an almost audible creak of ancient brogues, murmuring sonorously ‘I’m most grateful’. On resuming his seat he placed his file under his arm. He was in his element. He was in court!

Not quite everything went his way. Philip Hollobone (Con, Kettering) had him chewing air for a few seconds with a question about the ineptitude of fraud prosecutions.

His Labour shadow, clever Nick Thomas-Symonds, tweaked him over past utterances about certain overseas tax jurisdictions.

These were mere mosquitoes divebombing a bull elephant carrying a swaying howdah. Mr Cox lowered his larynx another couple of ratchets and told Mr Thomas-Symonds he was misquoting him. ‘I can take him through it and he’ll see that I’m right,’ he said paternalistically.