Drumming in St Patrick’s Day! Prince of Wales and Duchess of Cornwall learn to play the bodhrán and enjoy a pint of Guinness as they visit the Irish cultural centre in Hammersmith

Prince Charles and the Duchess of Cornwall kicked off their St Patrick’s Day celebrations early today in West London.

The heir-to-the-throne, 73 and his wife, 74, learned to play the bodhrán and met with Irish artists at the Irish Cultural Centre in Hammersmith this morning.

The Prince of Wales got to pour his own pint of Guinness and enjoyed several sips, before being treated to a performance by Irish dancers.

The Duchess of Cornwall looked stylish in a silky green number from Samantha Cameron’s label Cefinn.

The visit comes as Ireland prepares to celebrate St Patrick’s Day on Thursday and less than two weeks before Charles and Camilla are due to travel to the Emerald Isle for a three-day state visit at the end of the month. 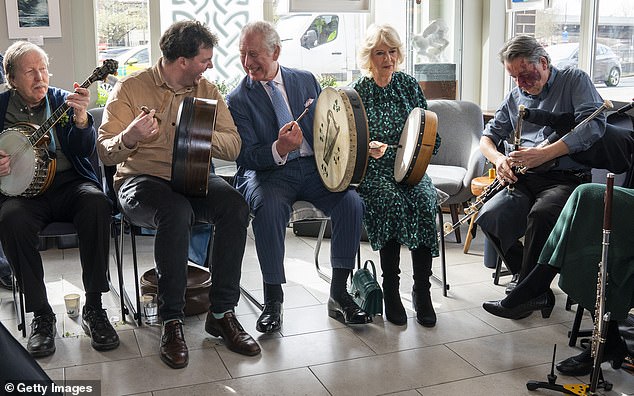 The heir-to-the-throne, 73 and his wife, 74, learned to play the Bodhrán and met with Irish artists at the Irish Cultural Centre in Hammersmith this morning 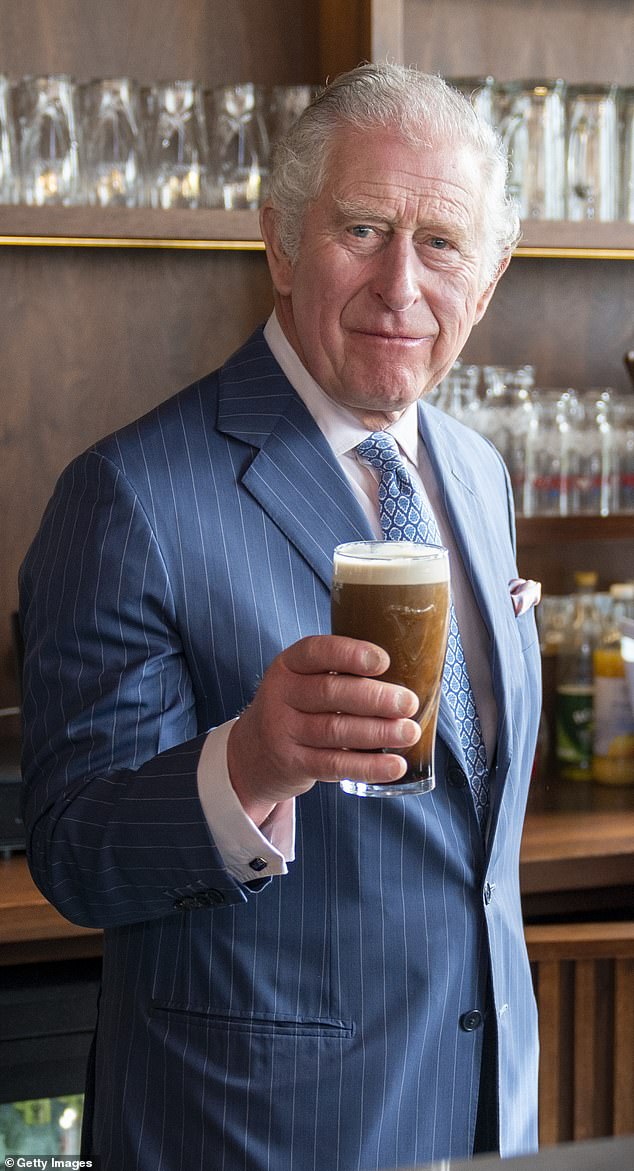 The couple, who attended the Commonwealth Day service on Monday, appeared in good spirits, partaking in the fun activities the centre had prepared for them.

They were eagerly greeted by staff and treated to a performance by the centre’s musicians, including children and their teachers.

Charles and Camilla later enjoyed a crash course in Irish music, each learning to play the bodhrán, a traditional Irish drum played with a tipper called a cipín.

After paying close attention to the instructions, the heir-to-the-throne played the drum like a pro, beating the instrument faster and faster as the music played on. 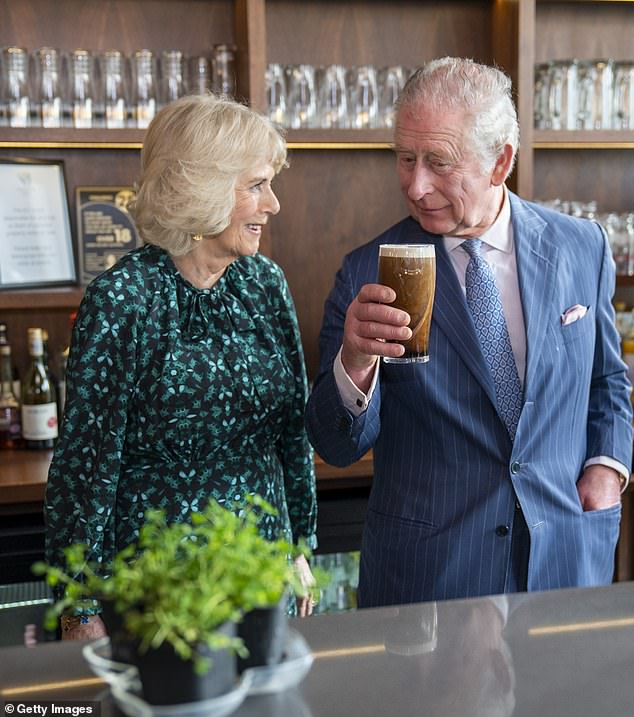 The Duchess of Cornwall looked stylish in a green silk dress by Samantha Cameron’s label Cefinn, while Prince Charles was dapper in a blue striped suit 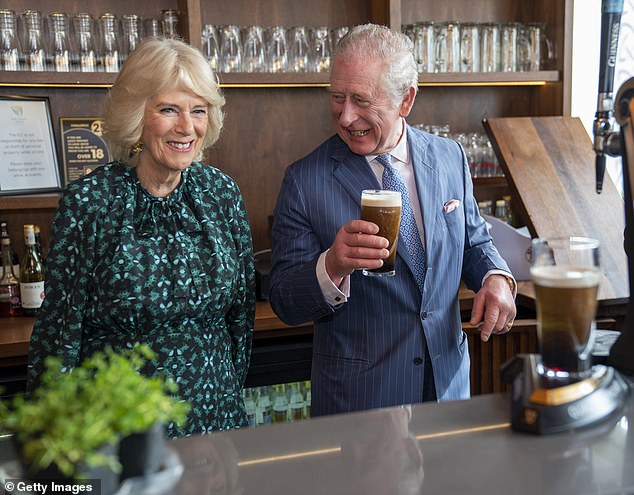 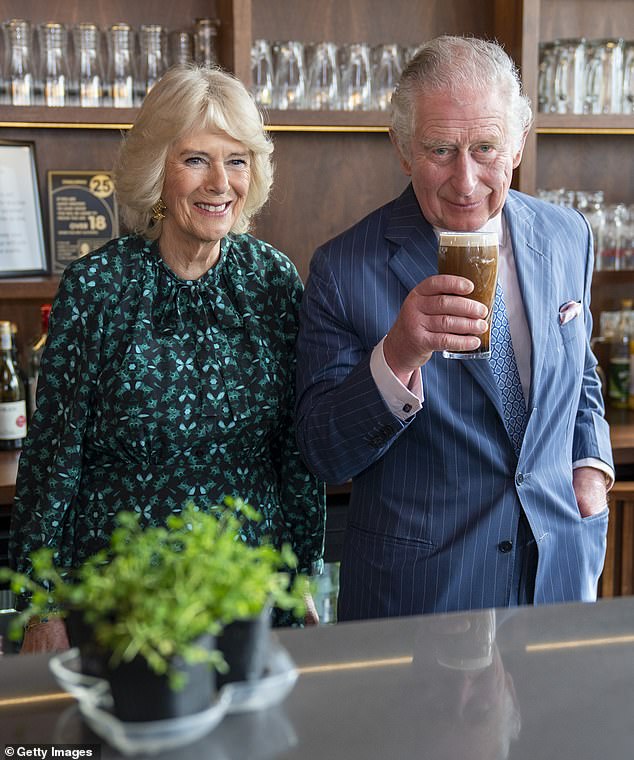 After this demonstration, the Prince of Wales headed to the centre’s bar, where a hands-on bartender taught him how to pour a perfect pint of Guinness.

The good-natured royal sampled the fresh drink, going for an eager firt sip.

His wife then had to point out he had a spot of froth on his nose, with Charles wiping it away with a chuckle, before going for one last cheeky sip.

The Prince of Wales and Duchess of Cornwall were then treated to a demonstration of Irish dancing by performers wearing colourful costumes. 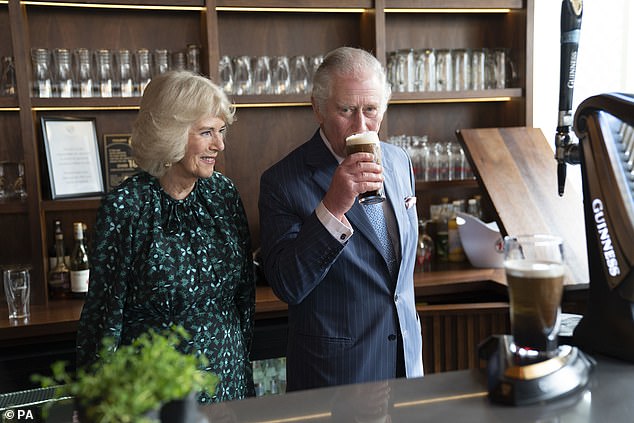 Cheers! The Prince sampled his Guinness while the centre’s staff and onlookers cheered him on 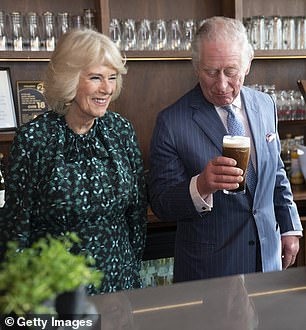 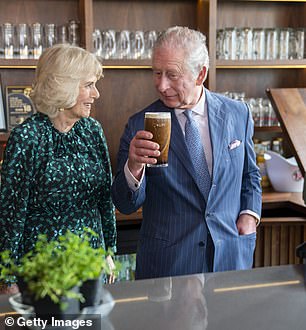 After a crash course in Irish music, the Prince of Wales learned to pour his own Guinness while the Duchess looked on 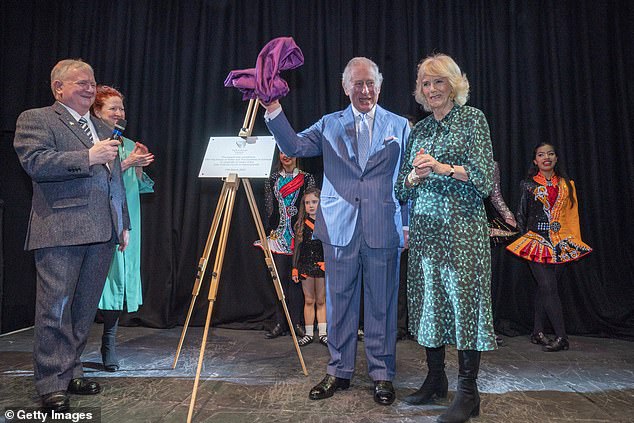 The couple were treated to a performance by Irish dancers, after which the Prince of Wales unveilled a plaque commemorating his visit to the centre

At the end of the performance, Charles jokingly had a little leg kick of his own, before unveilling a plaque commemorating his and Camilla’s visit to the centre.

Thanks to their tour of the centre, the couple will be well-prepared for their state visit to Ireland, which is due to take place from March 23rd to March 25th.

During a whirlwind three-day visit, Charles and Camilla will visit Cahir Castle and the Rock of Cashel in County Tipperary,

They will also visit a second county, which is yet to be revealed.

The Duchess of Cornwall paid tribute to the Queen with her choice of outfit as she joined members of the Royal Family at the Commonwealth Day service yesterday.

Camilla stepped out in a favourite purple coat dress and matching hat, echoing the vibrant ensemble worn by her mother-in-law to the same event in 2019.

It marked Camilla’s first major royal engagement since The Queen issued her seal of approval for the duchess to use the title of Queen Consort when her husband, Prince Charles, becomes King. 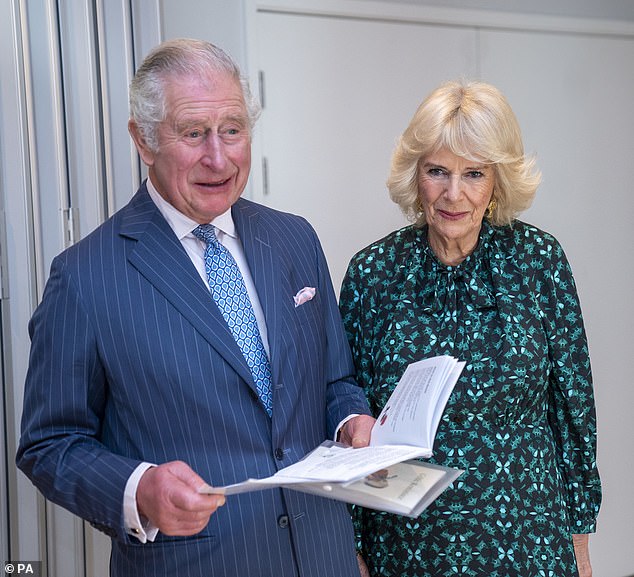 The Queen, 95, who has recently recovered from coronavirus and has been experiencing mobility issues, had hoped to attend in person but asked her son Charles to represent her at the service after discussing arrangements with members of the Royal Household.

Ensuring the comfort of the monarch, who now regularly uses a stick, is thought to have been an overriding consideration in her decision not to take part.

Yet Camilla made sure the Queen’s signature style at least was present by choosing to wear one of Her Majesty’s favourite colours. The Queen even has a similar hat and brooches.

She opted for a head-to-toe monochrome look, a popular styling technique for members of the Royal Family.

The Queen and the Duchess of Cornwall often co-ordinate their outfits for the annual event, an important date in the royal calendar, and have worn shades of purple on previous occasions.

The last time the Queen and Camilla both attended the Commonwealth Day service was in 2020, which also marked the last joint official royal engagement by the Duke and Duchess of Sussex.

On that occasion they both wore outfits in complementary shades of blue. Last year’s service was cancelled due to the pandemic.

Purple reign! The Duchess of Cornwall paid tribute to the Queen with her choice of outfit as she joined members of the Royal Family at the Commonwealth Day service yesterday (right). Camilla, 74, stepped out in a favourite purple coat dress and matching hat, echoing the vibrant ensemble worn by her mother-in-law in 2019 (left). The Queen missed yesterday’s event