Prince Harry, 35, and his wife Meghan Markle, 38, are only a few weeks away from stepping down as senior members of the Royal Family, and although they hoped that all the royal conflicts and dramas will be settled by then, a tarot expert revealed exclusively to Express.co.uk that “difficult times”, “more disagreements” and “conflict” are on the horizon.

Prince Harry, born on 15 September 1984, is a Virgo, an Earth sign and, according to Justine Ayling – who specialises in clairvoyance, tarot, psychometric, intuitive counselling, astrology and messages from ‘Spirit World’ – the Duke is in for a couple of tough months.

She said: “Harry is striving to carve an independent future for his family, sometimes his straightforward approach and his directness can be perceived as petulance, he must be careful not to be seen as throwing his toys out of the pram in order to get what he wants – he is fiercely loyal to Meghan and once a Virgo picks a life partner they will do anything to make them happy.”

The Tarot expert said she used a three-card spread to get a better understanding of the Duke and his current state of mind, to gain insight into his future.

Justine pulled out “The Moon”, “Knight of Pentacles” and “Five of Swords” for the Duke of Sussex in that order, but what did the cards reveal to the expert? 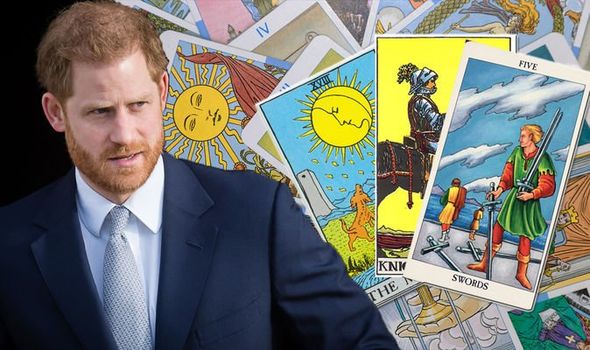 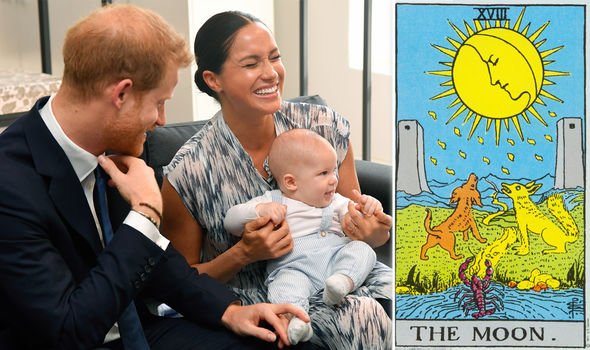 Justine analysed the first card (The Moon) and claimed: “This card is all about illusion, things not being all that they appear.

“It suggests ‘difficult’ periods, feelings of insecurity and divided loyalties.

“Harry wants to provide a more private life for Meghan and Archie and feels Canada is the nirvana where their dream will be realised.

“Anxiety around his future career direction is also linked to this card and miscommunication with his elders will continue to cause misunderstandings.

“He must guard against stubbornness in his dealings with people in authority,” she explained.

Justine then analysed the second card (Knight of Pentacles) and said: “Living a ‘normal’ life for the Sussexes will involve hard work and a conservative approach.

“They both have a plan in place on what they want their life to be and they are unwavering in their resolve, however, they should take a more slow and steady wins the race stance rather than the more bombastic way we are led to believe is occurring.

“Family feuds are never pleasant but within the Royal Family they can be destructive.

“Harry, along with Meghan, has planned this move meticulously before its execution as the Knight of Pentacles leaves nothing to chance, although he is known to dream big. 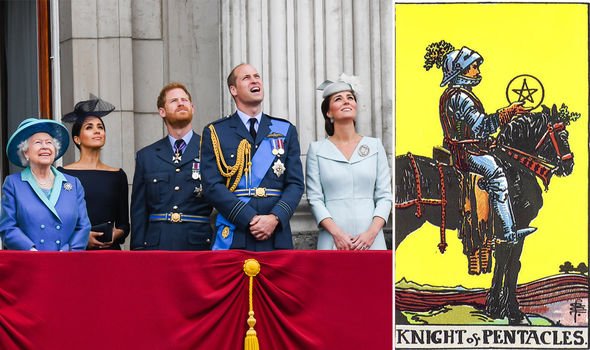 It’s an exciting time for Harry and eventually a happy medium will be reached with the Queen but the dust will not settle until around November time,” she added.

Justine then also analysed the third and final card (Five of Swords) and revealed what it showed her: ”Conflict and disagreements are forefront as is change but it warns Harry to pick his battles wisely, don’t sweat the small stuff, concentrate on the good things coming up.

“[For example] the Invictus Games in Holland in May for Harry, movie opportunities for Meghan and both need to put their love and energy into raising Archie ensuring he has a healthy and stable relationship with his English family.”

The Tarot expert added: “In conclusion, difficult times over the coming months, more disagreements and conflict but this will settle by late Autumn and Harry will achieve the private life he desires for his family.”

What is a Tarot card reading?

Tarot is one of the oldest forms of fortune telling known to man. A Tarot deck is a deck of cards, usually 78 cards, that is used by someone who is skilled in the reading of them. Depending on the type of reading that you are wanting to have, the Reader will consult the cards to show them what you are needing to know. Tarot cards have been around since the fifteenth century and are still one of the world’s most common ways of divining into the future. 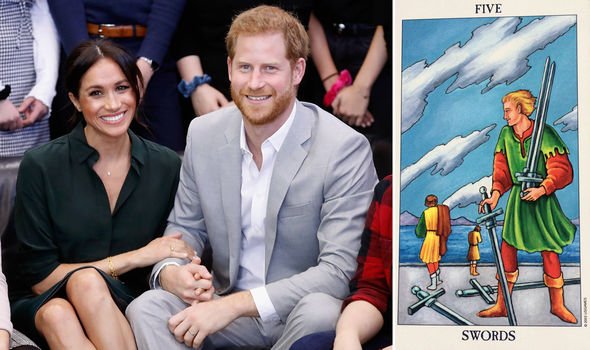 On Wednesday, Prince Harry who will step down as a senior royal in less than five weeks, was in the Scottish capital for a “working summit” of the Travalyst partnership, which will feature a grading system for users to track their carbon emissions.

Before he took to the stage on Wednesday, host Ayesha Hazarika, a former Labour adviser, said: “He’s made it clear that we are all just to call him Harry. So ladies and gentlemen, please give a big, warm, Scottish welcome to Harry.”

Harry flew to Britain from Canada on a commercial flight earlier this week and arrived in Edinburgh on an eco-friendly LNER train from London King’s Cross station last night, with taxpayer-funded Scotland Yard bodyguards.

The 35-year-old Duke, who is officially known as the Earl of Dumbarton when in Scotland, has been stung by criticism over the past six months of his frequent use of private jets while campaigning on environmental issues.

Harry’s flight to Britain this week was believed to have been the seventh flight the Queen’s grandson has taken so far this year – following return trips from Vancouver Island to London, Miami in Florida and Palo Alto in California.

He will visit the Abbey Road Studios in London on Friday to record a new song for his Invictus Games with rock star Jon Bon Jovi before being joined by his wife Meghan – and, possibly, the couple’s son Archie – early next week for five further official appearances.