Meghan’s VERY quirky birth stories – from Nando’s takeaway, to a framed photo of Diana in the delivery room and Sanskrit music (and they even took a moment to ‘renew their wedding vows’ after Lili’s arrival!)

Prince Harry has shared some intimate details surrounding the births of his two children in his explosive memoir.

Writing in Spare, the Duke of Sussex, 38, reminisced about the ‘chaos’ surrounding the birth of his son Archie, on May 6, 2019 at Portland Hospital.

He revealed that he ate Nando’s chicken, and admitted to hogging his wife’s laughing gas while they listened to songs in Sanskrit, and followed recommendations from an Ayurvedic Meghan had consulted.

Harry added he didn’t text anyone to announce the birth, and that Meghan and he were back at Frogmore Cottage with Archie within two hours him being born. 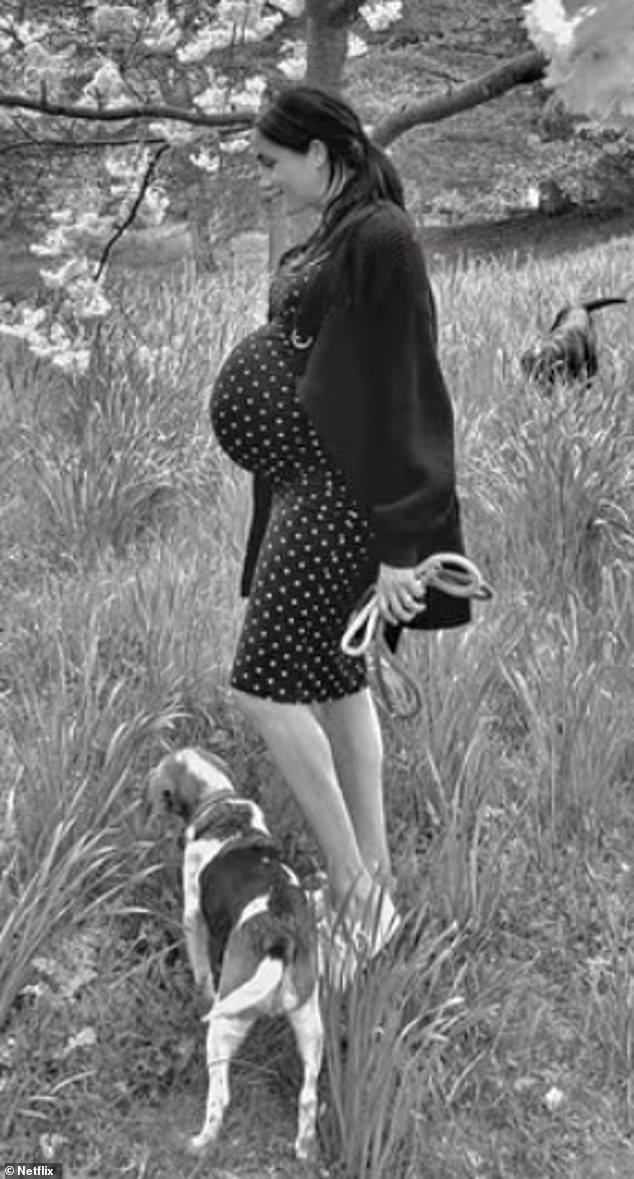 The Duke of Sussex, 38, reminisced about the ‘chaos’ surrounding the birth of his son Archie on May 6th 2019 at Portland Hospital and the bliss of his daughter’s Lilibet’s birth on June 4th in California. Pictured: Meghan at Frogmore Cottage during her pregnancy with Archie

He revealed that the birth of his daughter Lilibet, two years later, in California on June 4 2021, was ‘bliss,’ and that the couple were calmer than during their first child’s birth, with Harry hand delivering his second child into the world.

He said his wife was 10 days past her due date when she was medically induced at Portland hospital in May 2019.

He recalled how the couple hopped on a nondescript car to leave Frogmore Cottage without catching the attention of the media stationed outside of the property.

Once they arrived at Portland hospital, the Duke of Sussex revealed they were shown to a private room via a secret lift. 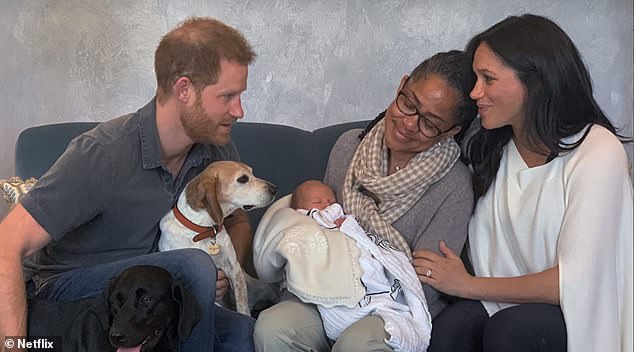 Harry and Meghan with her mother Doria Ragland after Archie’s birth in 2019. Harry said the couple were back at Frogmore Cottage two hours after their son was born

During the Duchess’ first labour, Prince Harry described how the pair’s bodyguards bought a Nando’s takeaway to the hospital. He also recalls using laughing gas to calm his nerves.

He revealed the laughing gas was meant for his wife, but that he used so much of it, there was none left for her, and the team had to bring another bottle in for Meghan.

He recalled that Meghan laughed and rolled her eyes at home as she was bounced on a large purple ball in order to induce labour.

The couple had decorated Meghan’s hospital room with the same electric candles Harry used for his proposal in 2017, and Meghan suggested they put a framed picture of Princess Diana on the bedside table.

The pair also listened to songs by German artist Deva Premal, who turned Sanskrit mantras into music, during the delivery. 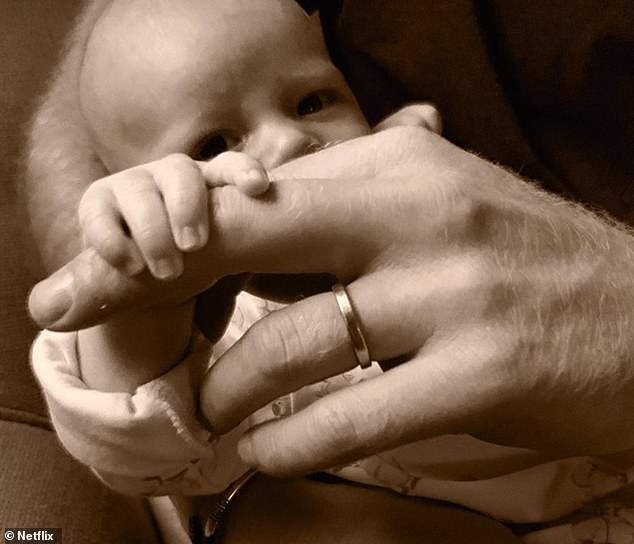 Archie picturing his father’s hand shortly after his birth. Harry admitted he took several hits of laughing gas to calm his nerves when Meghan gave birth for the first time 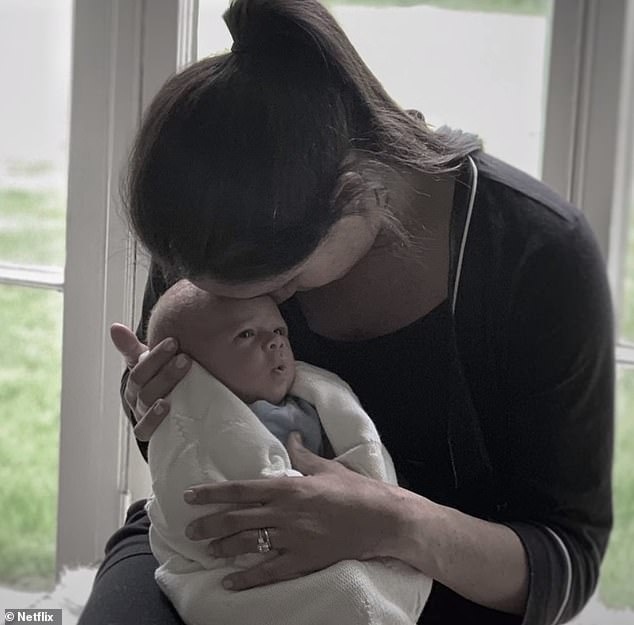 Meghan cuddling Archie at Frogmore Cottage soon after his birth. The Duke of Sussex said the couple told their son how much they loved him within one minute of him being born

When the contractions became closer in time, Meghan hopped in a bathtub to deliver the baby and had an epidural to help with the pain of labour.

Harry recounted how he held Meghan’s hand as she pushed to deliver Archie, and revealed she had a complicated birth, describing his son’s head as being ‘tangled’.

He revealed he encouraged Meghan to keep pushing to deliver their son.

When Archie was born, the couple both cried after the baby was wrapped in a towel and given to Meghan.

The Duke of Sussex recounted how the practitioner had told the couple that newborns absorb everything said to them in the first minute of their life, and how the couple told Archie they loved him. 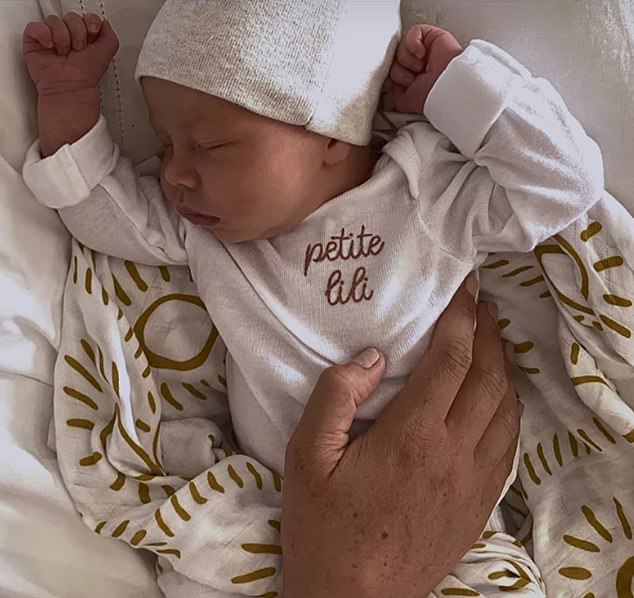 Prince Harry revealed he didn’t text anyone to tell them the news of his son’s birth, but instead watched the birthing team running checks on him.

He shared that the couple used the same people carrier they had used to drive to the hospital to go back home, and were at Frogmore Cottage two hours after their son’s birth.

‘What bliss, we said, not having to worry about timing, protocols, journalists at the front gate,’ he wrote.

He recalled how the couple drove calmly to the hospital leaving Meghan enough time to get burgers and fries from In-N-Out and fajitas for Meghan.

The Duke of Sussex added that the couple did a viral Baby Mama dance after settling in their hospital room.

The dance, which was made popular on TikTok, sees pregnant women and their partners gleefully rubbing their baby bumps while singing they’ve been ‘pregnant for way too long.’

Prince Harry also revealed in the book that he told his wife he wanted the first thing their baby to see to be his face.

With the doctor overseeing the whole thing, Harry explained how he helped to deliver his daughter into the world and was overcome with emotion upon meeting his second child for the first time.

He then handed her over to Meghan – who later told him that she had ‘never been as in love with him as she was in that moment’ – so she could do skin-to-skin with her daughter.

Prince Harry recounted how Meghan told him later that she had never been more in love with him than during their daughter’s birth.

He revealed she shared with him some thoughts she had written in a journal at the time, which he said read as a declaration of love and a renewal of their wedding vows.

Along the notes, Meghan wrote that Harry delivering Lilibet and telling her that he would keep her safe had been ‘everything,’ and that Harry was not a Spare, in a nod to the title of his memoir.

Kate and Meghan ‘didn’t get on from the get-go’: Prince Harry tells Tom Bradby the Waleses ‘stereotyped’ his wife – and the ‘barrier’ was there before the two women fell out over bridesmaids dresses and hormones

‘She definitely hadn’t googled us’: Prince Harry reveals the awkward moment Meghan Markle thought Prince Andrew was the Queen’s PA – because he was holding her handbag

How could Harry do this to Kate on her birthday? Royal fans rally around Princess as she celebrates turning 41 – while King Charles and Camilla ignore drama to send their best wishes