Still a family unit! Prince Andrew wishes Fergie a happy 60th birthday as he shares an unseen snap with the Duchess, Beatrice and Eugenie and their partners

They divorced 23 years ago, but today Prince Andrew proved that he and his ex-wife Fergie are as close as ever as he shared a birthday tribute on Instagram to mark her 60th.

The Duke of York posted a selection of unseen images, including a family snap of himself and the Duchess with their daughters Beatrice and Eugenie and both their partners at this year’s Trooping The Colour.

Sharing her gratitude for all the well wishes she received, Sarah took to her own Instagram page to share a picture of herself handing an award to David Attenborough, with the caption: ‘Thank you all for the birthday messages! This is one of the highlights of my life.’

The ex-wife of the Duke of York and the mother of princesses Beatrice and Eugenie is understood to be marking her milestone quietly with family and friends. 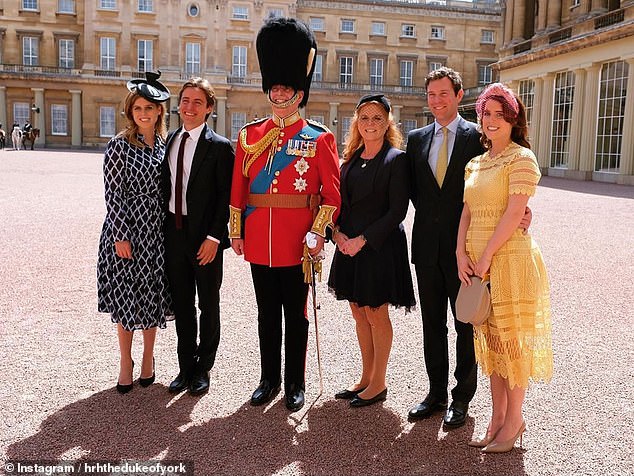 The Duke of York shared shared an unseen family photo from this year’s Trooping The Colour at Buckingham Palace. Fergie is seen standing proudly alongside her ex-husband, her daughter Beatrice and partner Edoardo Mapelli Mozzi, and her daughter Eugenie and husband Jack Brooksbank

Andrew has, however, faced a storm of controversy in recent months over his links to paedophile financier Jeffrey Epstein.

Virginia Giuffre, who alleges she was a victim of Epstein, has said she was forced into sexual encounters with the Duke.

Buckingham Palace and the Duke have strongly denied the accusations.

Sarah, who spent years as an outcast from the royal family following her split from Andrew, took centre stage at her younger daughter Eugenie’s high profile Windsor wedding last year. 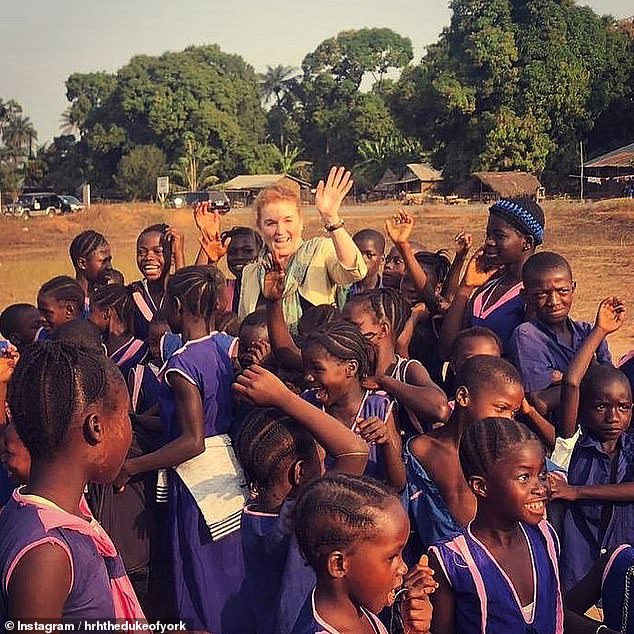 Another picture shows Sarah, Duchess of York being surrounded by children in Sierra Leone

She is now looking forward to Beatrice’s big day in 2020, and is expected to be helping her plan the nuptials.

Eugenie’s wedding in October 2018 was believed to be the first time the duchess and her former father-in-law the Duke of Edinburgh had been pictured together in 26 years after she was cast out from the royals amid her ‘toe sucking’ scandal in the 1990s.

Paparazzi photos of a topless ‘Fergie’ having her feet kissed by her ‘financial adviser’ John Bryan paved the way for her exit from the royal family, and Philip is said to have never forgiven the duchess for the scandal.

The Duchess was born Sarah Ferguson on October 15 1959, and her father Major Ronald Ferguson was the Prince of Wales’s polo manager.

She married Andrew on July 23 1986 at Westminster Abbey, with millions tuning in to watch the televised ceremony. 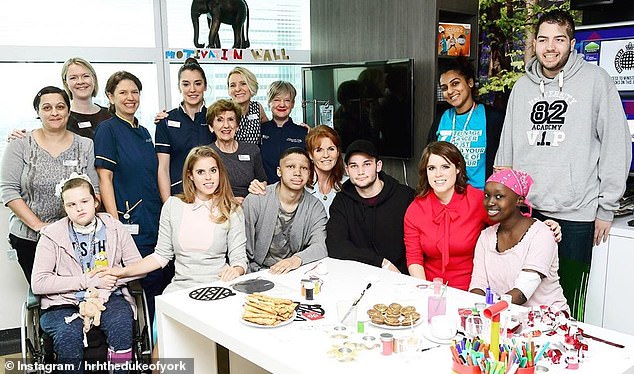 There was also a nod the Duchess of York’s charity work in the collection of pictures, including an image of a hospital visit with her daughters Beatrice and Eugenie

The duchess brought renewed vigour to the monarchy in the 1980s alongside the Princess of Wales, but struggled to come to terms with the rigorous disciplines of royal life.

She once confessed: ‘I was hopeless from the start…They could never make me the perfect princess.’

She endured cruel ridicule in the press over her weight, was criticised for the number of holidays she took, and also fell deeply into debt, owing millions.

She split from Andrew, but they remained ‘bestest’ friends, with the Duchess describing herself as being part of ‘the happiest divorced couple in the world’.

In May 2010, she became embroiled in a ‘cash for access’ scandal.

She was filmed by The News of the World newspaper promising to introduce an undercover reporter posing as a wealthy businessman to Andrew, who was then the UK’s special representative for international trade and investment.

The footage showed the former royal telling the journalist: ‘£500,000 when you can, to me, open doors.’ 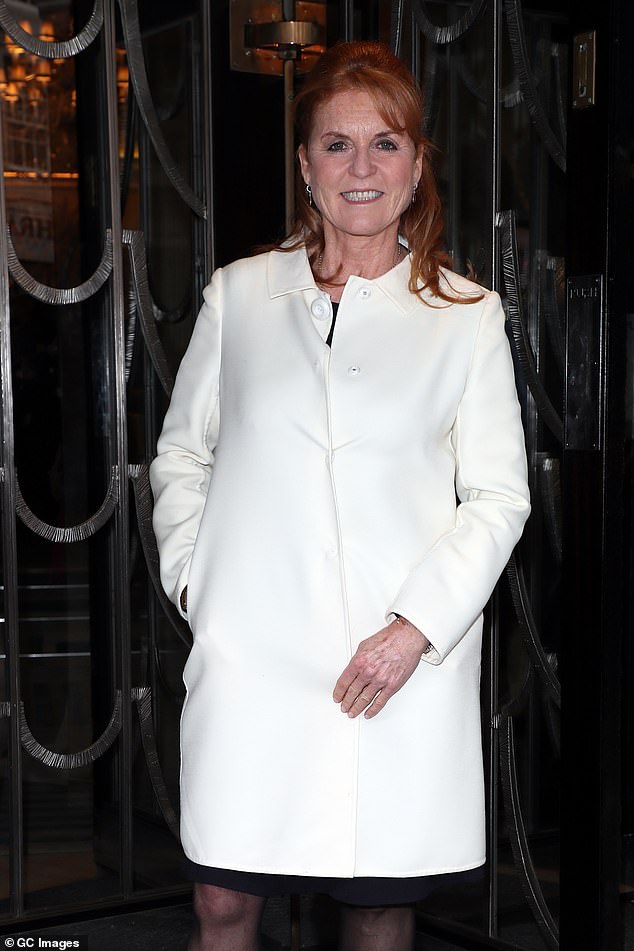 Sarah, Duchess of York is reportedly going to celebrate the milestone birthday ‘quietly’ with friends and family

In March 2011, she found herself in trouble again.

She admitted to a ‘terrible, terrible error of judgment’ after accepting £15,000 from convicted sex offender Epstein to pay a former assistant’s unpaid wages.

When Prince William married Kate Middleton in Westminster Abbey in 2011, the duchess was left off the guest list.

She was invited to Prince Harry’s wedding to Meghan Markle in May 2018, but was seated well out of view of the royals near the choir.

But five months later, Fergie was finally back in the royal fold when Eugenie married wine merchant Jack Brooksbank.

The Duchess has become known for her over the top tweets, and declared after Beatrice’s engagement ‘I know what a mother feels so I have tears of joy. I am so proud of this sensational news. Andrew and I are just the luckiest people ever to have two great sons in law’.

She last week revealed she has had considerable cosmetic surgery, including different forms of facelift.