What a difference a week away from Brexit makes: How Prime Minister Theresa May has gone from ‘puffy and lacklustre’ to ‘radiant and revitalised’ following her Easter break

She had a pretty relentless schedule in the run-up to Easter, with the chaos of Brexit visibly taking its toll on our prime minister.

But a 10-day stint in the countryside away from parliament appears to have done Theresa May the world of good.

Prior to the House of Commons taking a break for Easter recess on April 11, the 62-year-old sported deep dark circles under her eyes and a pallor complexion – the result of many late nights spent trying (and failing) to negotiate our exit from the European Union.

But a spot of much-needed rest and recuperation in the Welsh mountains with her husband Philip has clearly ‘revitalised’ the PM. 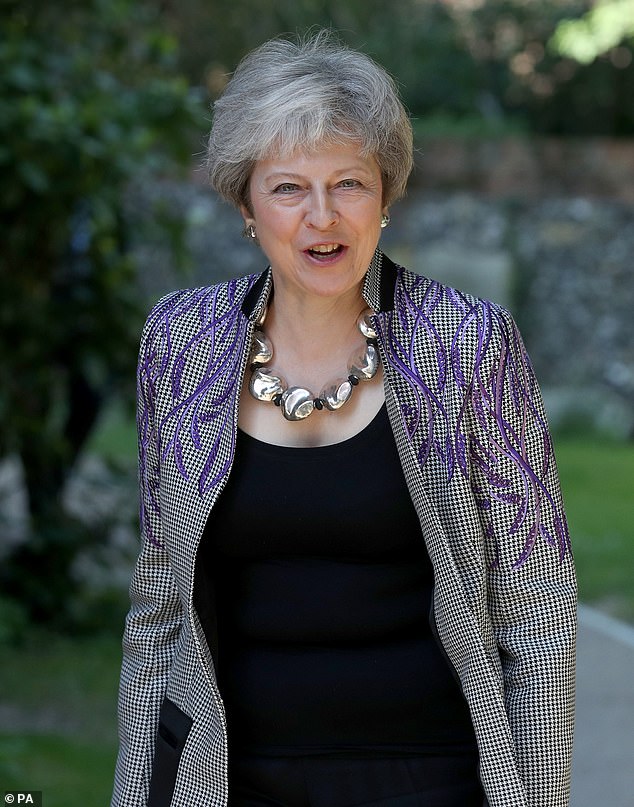 New woman: A 10-day break from parliament in the countryside appears to have done Theresa May the world of good 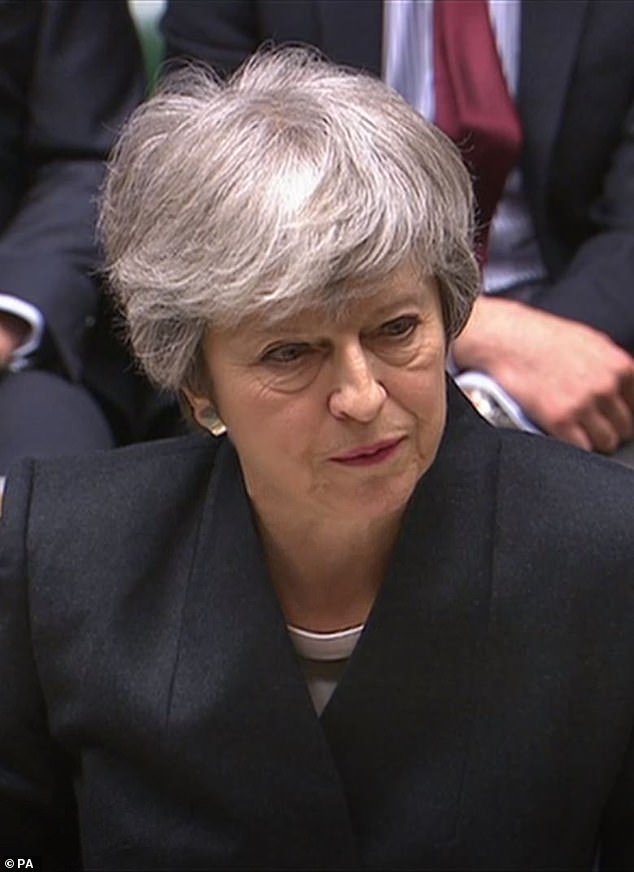 Brexit-beaten: The Prime Minister looked pale and tired on the final day of parliament before the Easter recess, with dark circles under her eyes

Celebrity make-up artist and beauty expert Olivia Todd told FEMAIL: ‘It would seem that Theresa May has been getting some much needed rest and has been out in the sunshine over the Easter bank holiday from her noticeably more radiant complexion.

‘Suddenly there are no puffy eyes or dark circles in sight, which makes a change from her lacklustre complexion in previous weeks.

‘It’s true that sometimes all we need is an adequate amount of rest and relaxation, good weather and to drink plenty of water to revitalise and to bring the skin back to life again.’

Olivia told how not getting enough sleep results in poor water balance, which then leads to puffiness and more visible wrinkles.

‘It lowers your complexion’s PH levels, which could be the reason as to why Theresa May has possessed much less of a “glow” prior to the Easter weekend.

‘She has no doubt been outside enjoying the beautiful weather as she is definitely looking sun-kissed, which creates the look of a more youthful and glowing skin instantly.’ 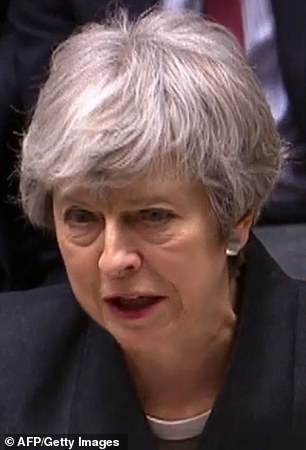 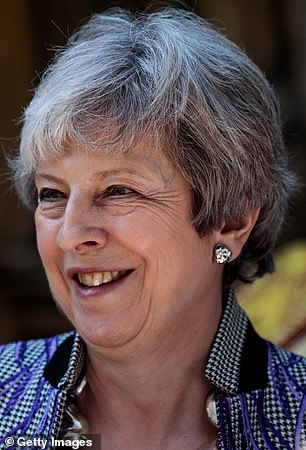 The prime minister, pictured left speaking in the House of Commons on April 11 and right shortly after attending her local church service on Easter Sunday, has had a haircut and looks much brighter since her break

Olivia added: ‘If I could bottle this combination for my clients I really would as these are the key things to focus on first when wanting to achieve that healthy, glowing complexion.

‘Many of us spend countless hours slathering on false tan, serums, moisturisers, peels and masks, but you must not forget the basics of looking after yourself first and foremost.’

Theresa and Phil were spotted attending a Palm Sunday church service in Dolgellau – a popular base for exploring the mountains of Snowdonia, according to North Wales Live. 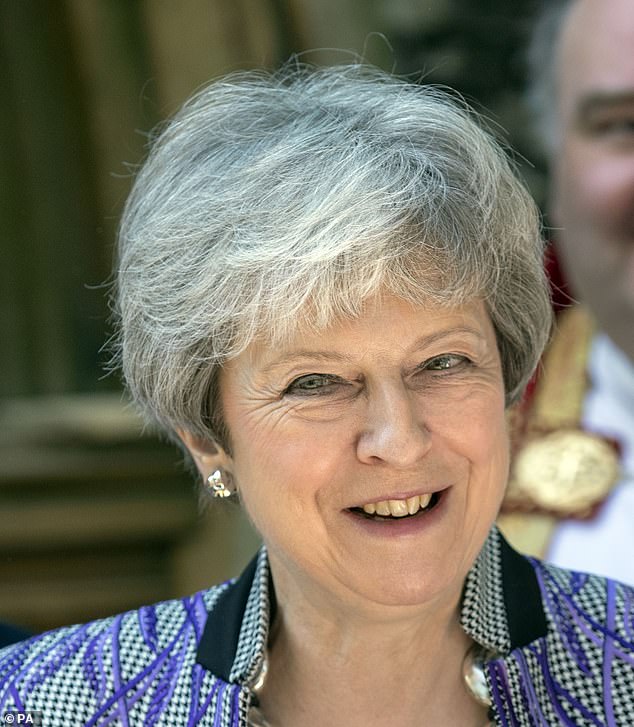 Olivia said Theresa May looked ‘sunkissed’, which creates the look of a more youthful and glowing complexion instantly

During a similar holiday in the area two years ago, the prime minister made the dubious decision to call a general election.

Following this rural walking trip, Theresa returned to Maidenhead, her constituency, for the Easter weekend, where she donned a high-vis jacket to help marshal a running race.

The smiling PM even posed for selfies with spectators as she handed out water to thirsty competitors. 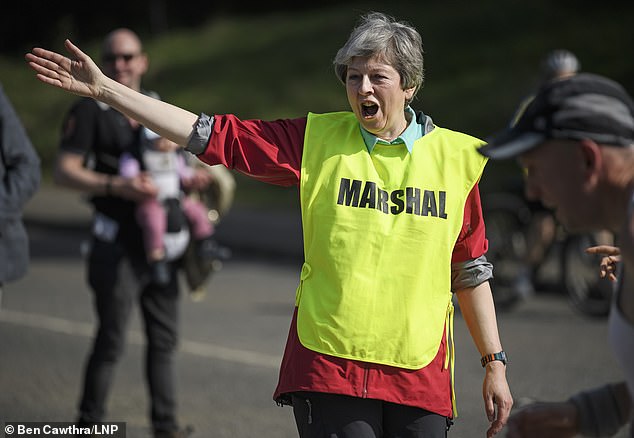 Theresa May looked to be in good voice once again at the weekend, cheering on runners in Maidenhead and guiding them in the right direction

She also looked to be in good voice once again, cheering on runners and guiding them in the right direction.

Parliament resumed today, with ministers gathering in Downing Street for the first time since the Prime Minister agreed to an EU Brexit extension until Halloween this year.

It emerged that Prime Minister is planning to bring her Brexit deal back for another vote in the next 10 days, despite suffering three defeats already.

But Tory MPs plan to change the rules of their party’s leadership elections so they can oust her.

How can Tory MPs oust Theresa May?

Westminster is rife with rumours Tory MPs are so angry with Theresa May’s Brexit pivot they want a new vote to remove her.

The Prime Minister fought and won a vote of no confidence in her party leadership in December – meaning she cannot be forced out by party rules.

But demands are mounting this afternoon for the party’s backbench 1922 Committee to call another vote anyway.

The theory is a new secret ballot would allow ministers to join a revolt and produce a landslide vote against Mrs May’s leadership.

Success would be yet another political humiliation piled onto the ailing Prime Minister.

But she has already suffered more indignities than any leader in living memory and carried on regardless – so the plotters cannot be sure it would work.