Phil Solomon, who used repurposed footage, manipulated images and striking soundtracks to make evocative experimental films that were widely admired by hard-core cinephiles, died on April 20 near Boulder, Colo. He was 65.

Andy Davidson, his friend and executor of his estate, said the cause was complications of major surgery.

Mr. Solomon, an emeritus professor of cinema students at the University of Colorado at Boulder, took up the experimental-film mantle in an era when the lure of feature filmmaking was irresistible to most of the creative young minds in cinema. His films, usually relatively short, did not have stars or plots in any conventional sense; he was after something more cerebral.

“Phil’s many films were examples of a truly unique style of what is sometimes called ‘visionary cinema,’ a term coined by P. Adams Sitney to describe films which were primarily concerned with the visual experience rather than with a story or narrative situation,” Jeanne M. Liotta, an experimental filmmaker and colleague of Mr. Solomon’s at the university, said by email. “Phil considered the film frame as a painting — a rectangle full of tensions, textures and pulls — rather than as a window through which to daydream.”

An early work, from 1980 (revised by Mr. Solomon in 1989), was “Nocturne,” which juxtaposed imagery from several sources to create an unsettling suburban world. “Finding similarities in the pulses and shapes between my own experiments in night photography, lightning storms, and night bombing in World War II, I constructed the war at home,” Mr. Solomon said of the film.

His most ambitious work may have been “American Falls,” an impressionistic 55-minute journey through American history that consisted of synchronized projections on three screens and made considerable use of deteriorated film images. 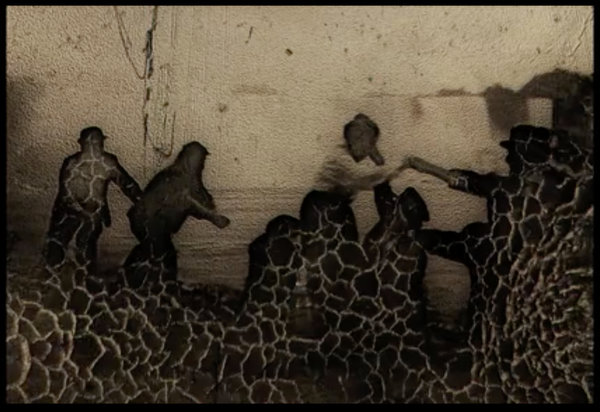 “I’ve been told that Phil considered this installation to be his magnum opus,” David Schwartz, who presented “American Falls” at the Museum of the Moving Image in Queens in 2012 when he was chief curator there, said by email. “It was a work that is both majestic and elegiac, both proudly American and expressive of the cataclysmic nature of our history.”

Experimental filmmaking has historically been rooted in celluloid, and it was in danger of being washed away by the video and digital revolutions in filmmaking. Mr. Schwartz said Mr. Solomon helped keep it alive.

“He was part of a small group of filmmakers who revitalized avant-garde cinema throughout the 1990s, which saw the twilight of celluloid film, and into the digital era,” he said. Some of Mr. Solomon’s most recent works, in fact, drew their found imagery not from old film stock but from video games.

Yet he knew that his type of filmmaking was a long way from the mass-market blockbusters that most people think of when they think of movies.

“All these years of teaching and showing and great work, it’s about the same amount of people at these shows,” he told The Boulder Weekly in 2012 of the audience for experimental cinema. “It’s 30, or 40, maybe 10, 20 that are interested.”

There wasn’t even much support within the fine-arts world, he said.

“Even though every filmmaker I know is interested in photography and painting and poetry,” he lamented, “very few people from the other arts know about experimental film.”

Philip Stewart Solomon was born on Jan. 3, 1954, in Manhattan. His father, Samuel, and his mother, Ruth (Rosenkrantz) Solomon, were partners in various small businesses. He grew up in Queens until the family moved to Monsey, N.Y., about 35 miles north of the city, in 1959.

He enrolled at the State University of New York at Binghamton. One of his professors was the filmmaker Ken Jacobs, known for found-footage works, who became an influence and a friend.

Mr. Solomon “was witty enough to have made it on the old borscht belt,” Mr. Jacobs recalled by email, “but many are grateful he turned to high art with work that is more a form of painting than storytelling. Phil’s very individual approach led finally to the filming of film, layers of emulsion as the subject, with results just as unexpected.”

Mr. Solomon received a bachelor’s degree at Binghamton in 1975 and a master’s degree at the Massachusetts College of Art and Design in 1980.

Professor Liotta said Mr. Solomon created a laboratory in his home where he could manipulate images from, for instance, “The Wizard of Oz” (used in his 1988 film, “The Secret Garden”) or his own home movies. The film scholar Tom Gunning explained the technique in an email interview.

“Phil Solomon’s films reworked films often shot by other people, subjecting them to a chemical and optical alchemy,” he said. “He dissolved home movies, television programs, historical newsreels and commercial films down to their material essence. Under Solomon’s hand, personal and historical memories transformed into dreamlike mist and nightmarish glimpses, uncovering imagery that looked both strange and strangely familiar.”

Sometimes, Mr. Solomon said, he knew what his manipulations would produce; at other times he did not.

“I would love to be able to completely control the process,” he said in a 2007 interview with the film historian Federico Rosin, “but have the option to ask for serendipity to step in when I needed her.”

Once he joined the Boulder faculty in 1991, Mr. Solomon often worked or exchanged ideas with Stan Brakhage, a leading figure in experimental filmmaking who was on the faculty there until the year before his death in 2003.

Though Mr. Solomon loved to work with celluloid, he adapted his experimentalism to changing technology, especially in a three-film sequence he began making with Mark Lapore and, after Mr. Lapore’s death in 2005, turned into a sort of elegy. (The final film in the trilogy, from 2007, is called “Last Days in a Lonely Place.”) The films made use of imagery from one of the Grand Theft Auto video games. Sarah Markgraf and Gregg Biermann, writing in Millennium Film Journal, said the work was a breakthrough.

“It is not exaggeration to call it a new paradigm of found footage aesthetics,” they said.

Mr. Solomon is survived by a sister, Michelle Solomon Klein.

Countless students studied under Mr. Solomon, including some, like the director Derek Cianfrance, who went on to significant film careers. Professor Liotta cited one particular course.

“Many of his classes were popular ones,” she said, “but none more beloved than his signature course, ‘Negotiating Rapture,’ where he would wax eloquently in the dark, savoring the cinema as the highest form of spiritual mystery.”