PETER HITCHENS: The lost shrunken heads of Oxford and the museums hell bent on erasing our past

The most frightening thing in George Orwell’s Nineteen Eighty-Four is not the torture or the naked terror. It is the obliteration of the past. This makes it impossible to know what life was once like, or to know if it has improved or grown worse.

So far, much of Orwell’s prophecy has yet to come about. There are no actual Thought Police, though there are a lot of people who would fit well into such a body. The surveillance he describes is in its infancy here — though far advanced in China. But much of the past is being erased.

If a piece of information is not on the internet, most people have no idea how to find out about it. Modern books and media actually alter the truth for political reasons. But the most startling example of the wiping out of the past can be found in museums.

For example, the Wellcome Trust has just closed a permanent display in London because it ‘perpetuates a version of medical history that is based on racist, sexist and ableist theories and language’. 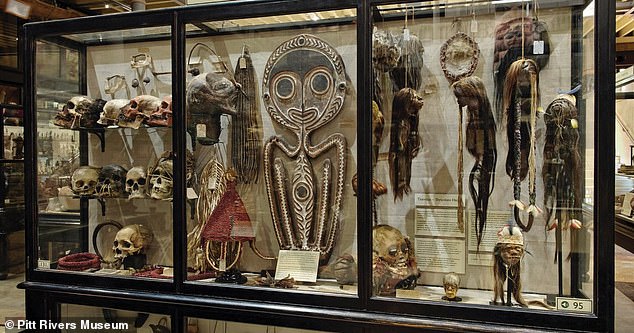 Out of sight: The famous ‘Dead Enemies’ shrunken heads display from South America was nowhere to be found this week

Allegedly, the display also told a story of ‘a man with enormous wealth, power and privilege’. And we can’t have that. The museum claimed that ‘we can’t change our past’, though surely that is exactly what you do when you close such exhibits. It added: ‘But we can work towards a future where we give voice to the narratives and lived experiences of those who have been silenced, erased and ignored.’

I’d say that this process ends up erasing, ignoring and silencing voices from the past that we still ought to know about, even if — especially if — we do not like what they say.

This sort of thing is very common now. No museum or gallery is safe from it. As the years pass, the labels on pictures and the notes in exhibition catalogues grow more and more politically correct.

In one rare case, the historian and biographer Andrew Roberts (now Lord Roberts of Belgravia) was able to reverse highly political changes made to the National Army Museum in London. Before his victory, the corrected museum boasted that it ‘challenges you to think again about what an army museum is’.

But as Roberts rightly asked: ‘Why should it? Why can’t it just be a museum that houses the paraphernalia of the national Army? Why should it be somewhere that leaves visitors ashamed of the Army’s supposed legacy of colonialism, imperialism and slavery, when that constituted only a tiny part of its story and isn’t accurately portrayed anyhow?

‘On a greater issue, when will the long march of political correctness through our great national institutions be finally checked?’

The answer to that is that it probably won’t be. Much credit goes to Roberts for fighting in this case. But most of us do not know where to start.

This week, impelled by the sour news from the Wellcome Trust, I forced myself to visit, for the first time in years, what was once one of my favourite museums in the world. This is the once-enchanting Pitt Rivers Museum in Oxford.

You will almost certainly have heard of its gruesome collection of shrunken heads. The Pitt Rivers appears in Colin Dexter’s Inspector Morse story The Daughters Of Cain and in the TV version of it. 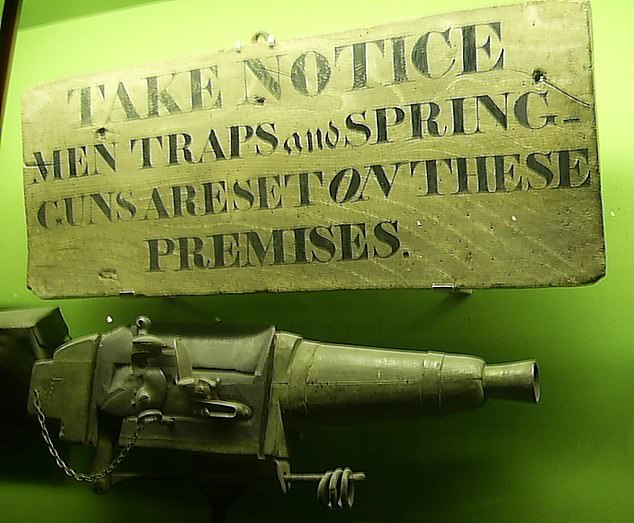 Nasty surprise: The sign for this blunderbuss is now gone

Morse found the place uncanny (as I did) and mused that it might not be pleasant to be locked in its sinister clanging galleries after dark when everyone had gone. Who knew what might stir? The museum’s uncorrected delights were also celebrated by that fine poet James Fenton, half a century ago.

He describes it as I first saw it, a shadowy series of iron floors in a sort of barn, dominated by a 35 ft carved totem pole and crammed with often quite creepy trophies of intrepid Victorian and Edwardian expeditions to the remote places of the world.

Whatever you actually think of the British imperial era, I doubt whether there was ever a better place to find out what it had felt and looked like, when it was still flourishing.

As Fenton said: ‘You have come upon the fabled lands where myths go when they die.’ Peering at the tiny ancient labels in Indian ink, you might spot ‘the hair of a witch, earth from the grave of a man killed by a tiger’.

The whole thing was supposed to have been based on some sort of Eurocentric idea of civilisation. Yet the second most potent exhibit (after the shrunken heads) was from a 19th-century Oxfordshire country estate.

It was a vicious and cruel ‘spring-gun’ — a blunderbuss set off by a hidden tripwire to blast buckshot into an unwary poacher. This item is still there (though easy to miss) but has been inexplicably separated from the sign-board which once accompanied it.

This said in chilly, severe lettering: ‘Take notice. Men traps and spring-guns are set on these premises.’

This is as nasty in its way as any of the other more alarming exhibits from various jungles.

This week I found a far more brightly-lit place, with much bigger labels and righteous notices explaining that during the recent refit, ‘displays with problematic case labels using derogatory language or reinforcing negative stereotypes were identified as requiring urgent attention’.

It announced that, ‘Coloniality divides the world into ‘the West and the rest’ and assigns racial, intellectual and cultural superiority to the West.’

Many surviving labels, it warned, use language which is ‘derogatory, racist and Eurocentric’.

I couldn’t help thinking, as I read this, that another purge surely cannot be far off, along with even brighter lights, tedious interactive displays and perhaps a top-floor vegan cafe.

The shrunken heads, unsurprisingly, have now gone for good. I had feared for years that this would happen. Once just on show without fuss, then rather apologetically explained, they are now apparently not fit to be seen.

But, like the Oxfordshire spring-gun, the shrunken heads told the raw truth about man’s capacity for savagery in all places and at all times. Anyone who saw them was a better person for it.

Outside lay the tree-shaded, gentle world of Oxford with its colleges, churches and tea-shops. Inside crouched this sinister, evocative treasure house, evidence that our planet contains more wonders and terrors, and more beliefs about them, than we begin to know.

But in 2022, you cannot have that experience any more. The modern dogma that has captured our establishment does not trust you to respond properly.

It idiotically fears that the sight of these relics will turn you into a militant imperialist, and that you lack the sense to grasp that the past is another country.

I’d say, please go there soon, before they strip away any more of its character and atmosphere. But far more important, I’d say that they did not have to change it in the first place.