The Liberal Party has confirmed Peter Dutton as its new leader and Sussan Ley as deputy, but the Nationals party room is still meeting to decide who will lead it.

Dutton and Ley were elected unopposed by a meeting of Liberal MPs in Canberra on Monday morning. 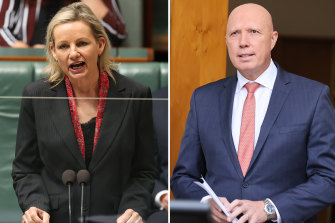 After the meeting, former prime minister Scott Morrison, who held onto his seat of Cook, said the new leaders were “incredibly experienced, well versed, are deeply committed Australians to both the Liberal cause and the cause of the nation” and would do an outstanding job.

“It was a good opportunity for me to thank my colleagues for their great loyalty and support over these past more than 3.5 years and to do that both on my behalf as well as as on behalf of my dear friend, Josh Frydenberg,” Morrison told reporters.

Frydenberg lost his seat of Kooyong to independent Monique Ryan and Morrison said the party room had led “a rousing cheer for Josh” during its meeting.

The Nationals started meeting at 10am to decide whether to keep Barnaby Joyce as leader. He is expected to be challenged by David Littleproud and Darren Chester.