Prime ministerial chief of staff turned right-wing media commentator Peta Credlin joins the ranks of the nation’s honourees, being appointed an Officer in the Order of Australia on the Queen’s Birthday list.

Tony Abbott’s right-hand woman, who drew more attention and criticism than most chiefs of staff, is among a record proportion of women receiving honours. 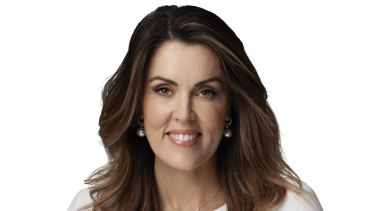 Other high-profile female recipients include outgoing Department of Foreign Affairs and Trade secretary Frances Adamson, who was the first female head of that department, and Tasmanian judge Barbara Baker. They are among five people appointed Companions of the Order of Australia, the nation’s highest honour.

Ms Adamson also tops the newly created COVID honour roll, which marks the work of people who are receiving awards in part for their work in responding to the pandemic.

Among those appointed an Officer in the Order of Australia along with Ms Credlin are former Victorian police commissioner Christine Nixon, former NSW judge Patricia Bergin, who led the inquiry into Crown Resorts’ suitability to hold a casino licence for Barangaroo in Sydney, former Nationals MP Kay Hull, and prominent constitutional expert Anne Twomey.

Ms Credlin said the increase in the number of women on the honours list – up to a record 44 per cent – reflected the concerted efforts to get more nominated.

“It’s not as though women haven’t been contributing, or achieving. They have,” she told the Herald and The Age.

“It is just that the recognition hasn’t always been forthcoming. That is now changing. And so it should.”

Ms Credlin was the third woman to be chief of staff to a prime minister but the first to join the Order of Australia. She has been appointed an AO for “distinguished service to Parliament and politics, to policy development, and to the executive function of government”.

Half the chiefs of staff to leaders since the Whitlam era have been appointed to the order, as either ACs or AOs.

Ms Credlin worked with Liberal opposition leaders Brendan Nelson and Malcolm Turnbull before joining Mr Abbott’s office as his top adviser when he became leader in 2009.

Her career was at times controversial as she became a target for MPs unhappy with Mr Abbott as prime minister. She was seen as ruthless and a control freak, and Mr Abbott was told he should cut her loose.

However, she has said she wasn’t consulted on one of Mr Abbott’s most contentious actions, the decision to reinstate knights and dames to the honours system.

After the Liberals dumped Mr Abbott in favour of Mr Turnbull, Ms Credlin became a media commentator. She now has a show on Sky News and is a columnist for News Corp.

She again rose to public prominence during Melbourne’s lockdown last year when she questioned Victorian Premier Daniel Andrews at length during his daily press conferences.

Reflecting on the reckoning over the past few months about the treatment of women in politics, Ms Credlin says it was the media’s “fixation with a female chief of staff” she found toughest to deal with.

“If we want to reform the culture of politics in this country, having now been an insider in both worlds, the media has a big role to play in driving both change and civility,” she said.

In recent months, she has said she is helping to collect evidence for Sex Discrimination Commissioner Kate Jenkins’ review of the parliamentary workplace culture.

Rumours persist about Ms Credlin’s future political ambitions. In the past six months, she’s been linked to the seat of Menzies (where she backed incumbent Kevin Andrews during the heated preselection contest he lost) and the Victorian Senate ticket.

For now, she’s reflecting on what her political career to date would have meant to her father, who died suddenly when Ms Credlin was in her 20s and never got to see her run the prime minister’s office.

“Like me, he grew up in the Mallee, and these sort of jobs were what other people did, not people from little country towns with no political connections,” she said.

“There’s no doubt he would have been proud and I know that this award today will mean a great deal to my mother who has shared so many of the highs and lows of political life with me.”

The honours lists have attracted controversy in recent times both because of their lack of diversity and who has been chosen.

Margaret Court’s upgrade in January from an AO to an AC was criticised as having nothing to do with tennis, after she became a controversial figure in recent years because of her religious views.

Last year, the Council of the Order of Australia reviewed awards given to Bettina Arndt and Mike Carlton after public outcry. It ultimately decided they could keep the honours.