‘My family tree is more like a branch… we have genetic defects to prove it’: People reveal their families’ darkest secrets – from incestuous relationships to a grandfather who killed his own brother to get out of the Vietnam draft

People are opening up about their long-held family secrets, revealing the surprising things they learned about relatives — and themselves — when they got older.

Reddit user u/Flash_Dimension kicked off the tell-all thread, asking other users: ‘Once you were old enough, what were the dark family secrets you were finally let in on?’

The question has earned thousands of replies, with some sharing stories of innocent family fibs that went on way too long, long-lost relatives, and shocking family crimes. 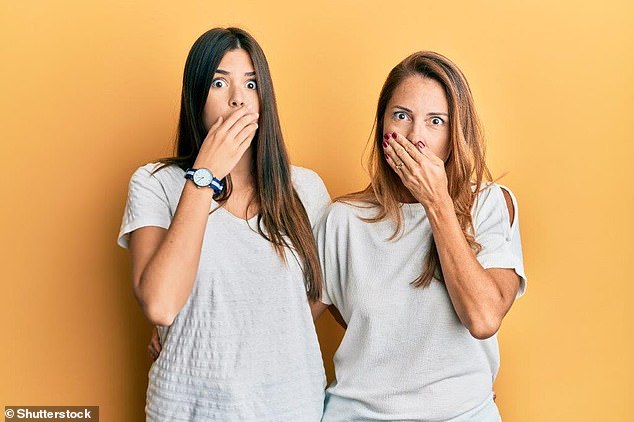 Surprise! People are opening up about their long-held family secrets, revealing the surprising things they learned about relatives — and themselves — when they got older (stock image)

A few of the stories have been pretty innocent, including one who learned the truth about her grandmother’s very special recipe.

‘Grandma’s top secret pie crust was actually just Marie Calender’s from the grocery store, set in a fancier dish,’ the Redditor wrote. ‘She messed with her daughters-in-law for years over it.’

Another shared how her mother went to great lengths to make her feel loved despite her dad not being in the picture.

‘My dad used to send me birthday cards every year when I was a young girl … even though I never got to meet him when I was young, I was glad to still receive a card from him with a few bucks acknowledging I was alive and that he did one day want to see me,’ she said.

But in her mid-teens, she learned that her mother had actually written every single one of those cards.

‘My grandfather would mail it to ourselves to make it seem legit. I never ever actually received any letter from him,’ she said.

Most family secrets, though, involved people being in big trouble.

‘Gramma didn’t decide to move in with us because she loved us so much and wanted to spend more time with us,’ one person said.

‘Gramma moved in because her son was a meth addict and convinced her to put his name on the house, take all the money out of it “for renovations,” and leave her homeless. She had a heart attack the night she found out and now has to live with a pacemaker.’

Another said they though their cousin lived with them for fun — but it was really because the cousin’s mother had problems.

‘I learned later that it was because child protective services took my cousins away from their mom because of mental health issues. My mom offered to take her sister’s kids until she got her mental health back in order,’ they wrote.

One found out that his dad was a philanderer — and had other children.

‘I got a Facebook message from one guy asking if I was related to my dad, since it’s not a common last name,’ they wrote.

‘I thought he was a fan of his work, because I was in college at the time and the guy was about the same age as me — that’s how I found out my dad slept around and that I had a half brother the same age as me.’

Some of the stories were incredibly dark, including instance of rape, incest, and even murder.

‘To put it shortly — my family tree, is more like a very long branch. Yes we have the genetic defects to prove it,’ wrote one. 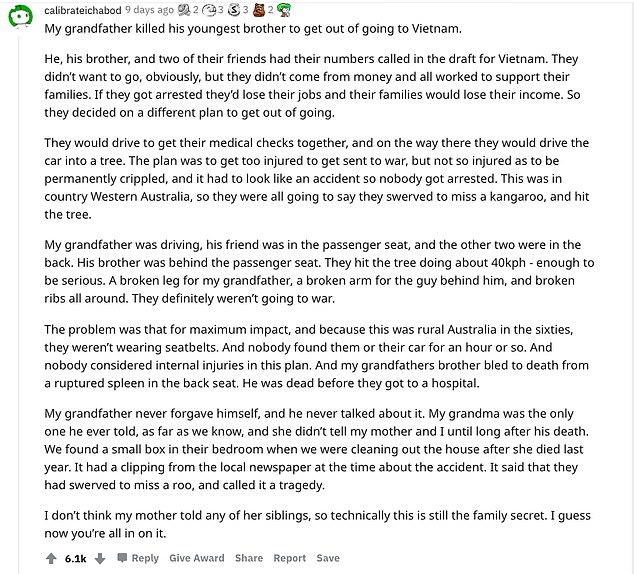 Story time! The question has earned thousands of replies, with some sharing stories of innocent family fibs that went on way too long, long-lost relatives, and shocking family crimes

Another revealed themselves to be the product of statutory rape.

‘My father got my mother pregnant when he was her teacher in high school,’ the said. ‘He was thirty and married. She was fifteen and his student. They ran off together, he got a divorce, and they got married in a state that allowed marriage at 16, two months before my older brother was born.’

One from Western Australia said their grandfather killed his own youngest brother to get out of the draft during the Vietnam war.

He, his brother, and two friends planned to drive a car into a tree, injuring themselves just enough to get to stay home.

But things took an unexpected turn. The Redditor’s grandfather was driving, and hit a tree hard enough to give everyone injuries, from a broken leg to broken ribs — and, in the case of his brother, internal injuries.

‘The problem was that for maximum impact, and because this was rural Australia in the sixties, they weren’t wearing seatbelts. And nobody found them or their car for an hour or so. And nobody considered internal injuries in this plan.

‘My grandfathers brother bled to death from a ruptured spleen in the back seat. He was dead before they got to a hospital.’

The Redditor went on to say that his grandfather ‘never forgave himself’ for the mistake.